Alright, I have a kinda-sorta embarrassing confession to make: I don’t know how to do my own hair. I know, it’s a super weird statement from someone who literally writes about beauty for a living. I mean, I can tell you exactly how to curl your hair with a straightener or how to get a perfectly defined twist-out every single time, but when it comes to actually doing these things on myself? Forget about it.

So when I began to settle into quarantine, I had a mini panic attack about WTF I was going to do with my hair. My sew-in was nearing the end of its life cycle, and with hair salons shut down, I would have to deal with my natural hair for truly the first time in my adult life. But no matter how many YouTube tutorials I watched, I could never get the styling down. And don’t even get me started on wash day—the detangling, oiling the scalp, shampooing, conditioning, deep conditioning…it was all too much.

But after joking with my friend Kimberly about how I was going to give myself box braids, I decided—despite my, uh, complete lack of skill—there was honestly no better time to try it. In a fit of delusion, I bought three packs of braiding hair, truly believing that I, a girl whose arms get tired after four minutes of blow-drying, could actually figure out how to box-braid my hair. So last Saturday night, I poured myself a glass of red wine (probs not the best idea before braiding but, hey, YOLO) and sat down to begin the incredibly long, WTF-was-I-thinking process. 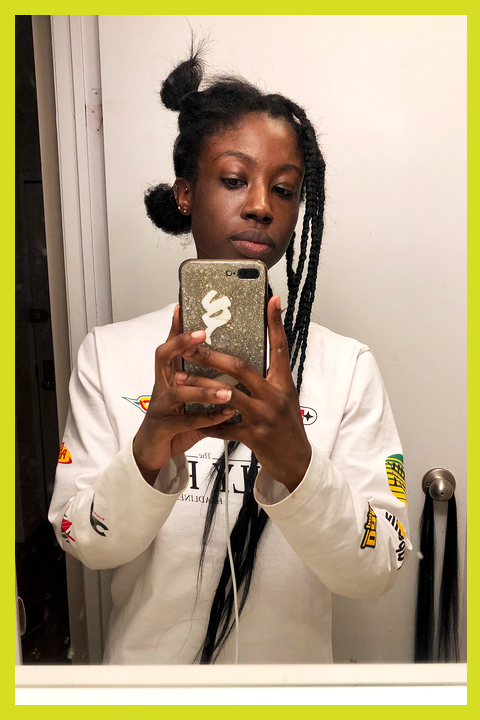 As apparently the only black girl who missed the How to Braid 101 class as a child, I grabbed my supplies (braiding hair, edge control, and a rat tail comb), powered up YouTube, and began my search for the easiest box-braid tutorial. After clicking on what seemed like dozens of videos, my initial “I’m doing it!” excitement quickly turned into anxiety. What the f*ck had I gotten myself into? I had landed on a tutorial that seemed easy enough, but when it came time to actually feed in the hair and braid it, I was stuck—I legit couldn’t figure it out.

I took another sip of merlot (necessary) and decided I had picked the wrong tutorial. The problem was obviously the video, not me. I watched—and vetoed—a couple more until I found a beginner tutorial that actually seemed doable. Now IDK if it was the wine or the new video, but by the grace of the hair gods above, I was finally able to feed the braiding hair into my natural hair and form a braid. Holy shit, I was doing it—I made a freakin’ braid. Only…the rest of my head to go. Cue phase two. 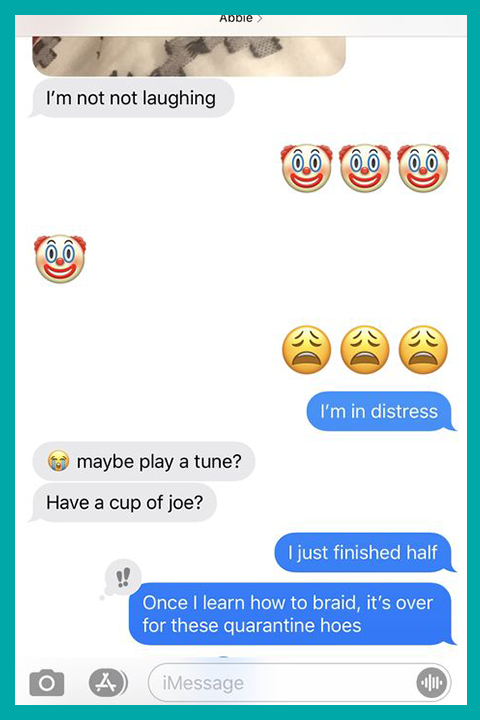 To no one’s surprise but my own, I hated braiding my hair as soon as I finished the first one. I just wasn’t good at it. My parts were uneven and messy, I couldn’t get the braids to lie flat at the root, and the size of the braids were all over the place.

I started to get the urge to quit (my go-to when I try something new and I’m not immediately great at it), so I called out to my roommate, Katherine, who insisted I go on. Given that Katherine, a Capricorn, couldn’t bear to leave something unfinished, and I, a Leo, absolutely could, I don’t even know why I asked for her advice. Regardless, I decided to get my shit together and continue what I started.

After finishing a few more braids, I looked in the mirror, and I hated them. Hated. At this point (a little over two hours in), I had almost finished half my head, and given the fact that I wanted to stop after the first braid, I saw this as an accomplishment in itself. Braiding half my head—albeit poorly—was impressive for me.

I texted my friends a picture of the halfway point, and one told me that I should take them out, while the other couldn’t stop laughing. Love the support! Even though I was feeling extremely unmotivated and my ego was slightly bruised, I kept going, if only for the sake of this story (fine, literally only because of this story). 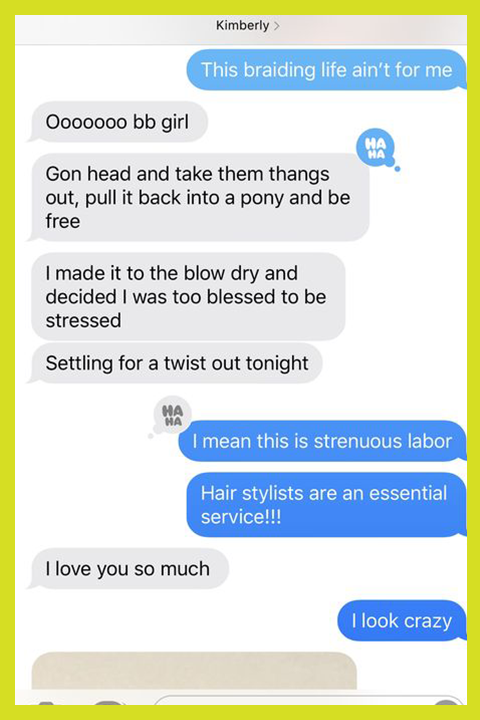 As I moved from one side of my head to the next, I got weary and, even worse, bored. Doing your hair requires a lot of patience, something I’ve never had much of (unfortunately for my parents). I get bored quickly—blame it on the fact that my sun, moon, and rising signs are all fire signs—and didn’t see the point in doing something that I could easily pay a professional to do. My roommate is the type of person who would build her dresser by hand. I would call a TaskRabbit.

So instead of giving myself real knotless braids, I decided to improvise and turn them in goddess braids, leaving the ends slightly unfinished à la Zoe Kravitz. Even though the braids got noticeably larger when I turned the right side of my head to the left, I did notice one positive thing: My braids were starting to get better. I gave myself a little pat on the back. 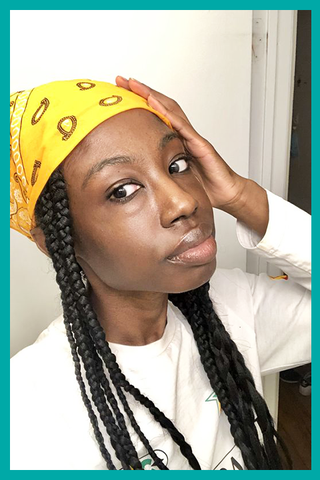 After about four and a half hours (YUP), I had finally finished the cursed task. I let my friends know the good news and got some “Woooos” and a couple “I’m so proud of you” texts. The few messages of praise, TBH, made up for the fact that I felt basically no sense of accomplishment after finishing the braids.

Even if they didn’t look perfect, that’s the one good thing about quarantine: You can f*ck up your hair and no one’s able to see it. A big silver lining for me, TBH. My mom asked me if I learned anything from the experience after I texted her a final pic. My answer? (1) I am never braiding my hair ever again, and (2) hairstylists are unsung heroes. I can’t wait to book an appointment once this is all over.