Eyebrows are fickle creatures. You can over pluck them, not pluck them enough, fill them in too heavily, give yourself too much of an arch. It’s a rollercoaster ride of beauty when it comes to brow, but maybe not for Rihanna. According to Allure, Rihanna may have a look-a-like to try her eyebrow looks on, and honestly, same. Okay, no, regular people don’t have eyebrow doubles, but if you could, wouldn’t you?

According to Allure, in an an interview with Entertainment Tonight, brow stylist Damone Roberts revealed that those now famous Met Gala brows weren’t just a spur of the moment decision. After all, Rihanna did actually dye her brows for the event, which she co-hosted with Amal Clooney and Donnatella Versace NBD. While it may have been hard to tear your eyes away from her sexy, sequined pope ensemble, those eyebrows were just as memorable given Rihanna’s typically dark brows and hair.

In the interview, Roberts says, "So Rihanna’s so fly that she has a lookalike model come by your space and you try out different looks on the eyebrows on the model and you send pictures to Rihanna and she decides whether she wants to do it or not!"

That’s exactly what she did for the Met Gala. 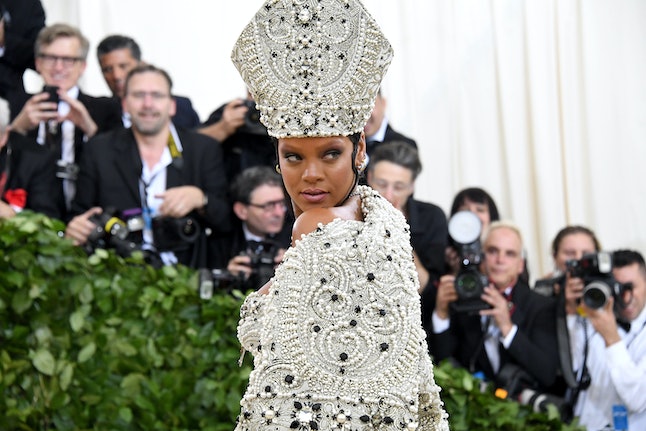 Roberts’ celebrity clients go beyond Rihanna, though. He’s worked with mega-stars like Jenna Dewan (who he says has some of the best brows in Hollywood), Christina Aguilera, Taraji P Henson, and Traci Ellis Ross. However, Rihanna may be the client with the most iconic brow moments.

Obviously, there’s her Met Gala blonde brow moment which was major, but she’s also had another memorable moment when it comes to her arches: her September British Vogue cover.

The cover was a major deal because while Rihanna has graced multiple Vogue covers in the past, her shoot for British Vogue marks the first time a black woman has ever been featured on a September issue for the magazine.

Outside of the achievement, though, her brows quickly caught attention. The ultra-skinny and majorly arched look is totally off trend for current brow styles, but if anyone could rock it, it’s Rihanna, and she did. In fact, the look was so iconic that beauty guru and YouTuber Alissa Ashley recreated the cover look on her channel and documented the entire process (pretty flawlessy, tbh).

In the image Rihanna posted to her Twitter account, there’s no mention of Roberts doing her brows for the shoot. It seems more likely that a makeup artist glued them down and covered them in foundation rather than have a brow stylist do them. However, could Rihanna have used her look-a-like for this brow look, too? Maybe. 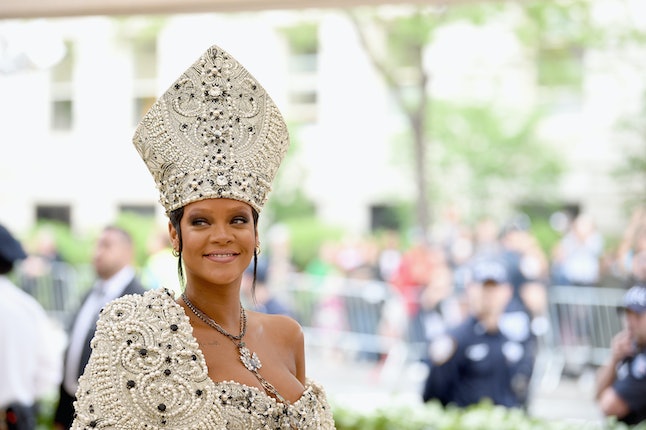 While you may think that it’s a bit extravagant to have a look-a-like model try out your brow looks before you do, this is Rihanna. She can do whatever she pleases. Plus, a brow double would definitely have saved you from those horrible days of over-plucking, so hey, don’t knock it until you try it, right?