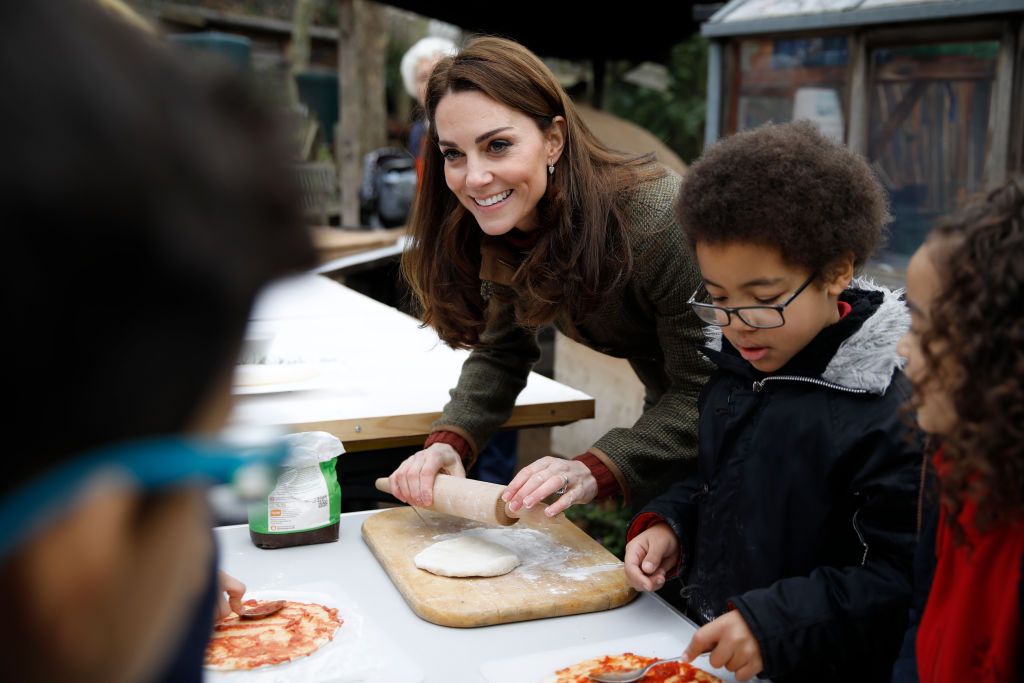 The Duchess of Cambridge held an engagement at a community garden in Islington, England to make bird feeders and cooked pizza with primary school students, today. However, one young child’s clever question about her grandmother-in-law had the royal stumped: Does Queen Elizabeth II eat pizza?

According to an adorable Twitter video posted by Rebecca English, The Daily Mail’s royal correspondent, one of the pupils asked Kate, “Has the Queen ever had pizza?” and Kate responded: “You know, that’s such a good question. I don’t know. I don’t know. Maybe next time I see her, shall I ask?”

The exchange took place while Kate joined local school children in making their own pizza, which would be cooked in the outdoor oven in the garden. While rolling out dough, the duchess and her young guests discussed their favorite pizza toppings. To the group’s surprise, one boy suggested cheese and cucumber.

Kate went on to mention that she’s going to have pepperoni on her pizza (although “not spicy”) and asked if the kids ever liked bacon on their pizza. But the same young boy wasn’t a fan, and asked with a puzzled face: “Why would you put bacon next to tomato sauce?” Looks like he was loyal to his cucumber toppings.

Another child inquired why Princess Charlotte and big brother Prince George did not visit the garden with their mom, and Kate explained that they were in school.

“They would love to come and do this with you. They will be very sad that I’ve been out here making pizzas with all of you and they haven’t been here,” she said. “They are in school. George is at a school called Thomas’s. He’s learning about space. Have you all learned about space?”

The students of St. Jude and St. Paul’s primary schools even surprised Kate with a few gifts including what appears to be a jar of honey and decorated apples with a handwritten note attached.