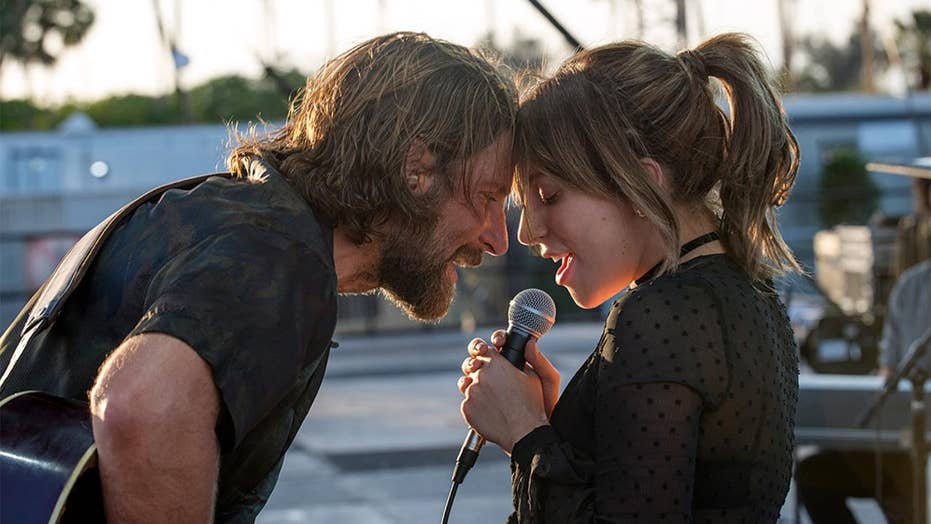 Lady Gaga and Bradley Cooper have captivated audiences with their sweeping drama “A Star is Born,” but despite earning multiple Oscar nominations, history is predicting it will fail to shine at this year’s Academy Awards.

Before the 32-year-old pop star and the 44-year-old actor lit up the stage with their hit song “Shallow” from the film, it was actress Judy Garland who stirred headlines for her performance in 1954’s “A Star is Born.” And while many predicted it was “The Wizard of Oz” star who would win big that night, it was Grace Kelly who earned the Best Actress Oscar for 1955’s “The Country Girl.”

TOP OSCAR WINNERS OF ALL TIME

“I do think the Academy does have a little bit of a thing against movie remakes,” Karger explains. “Only one remake, which is ‘The Departed,’ which most people don’t even know was a remake, won Best Picture. I think it’s really hard to do extremely well at the Oscars when you’re considered a remake. I do think unfortunately for Lady Gaga, she’s not going to win Best Actress. I think Glenn Close for ‘The Wife’ is going to beat her. But the good news is that Lady Gaga is going to win an Oscar for writing ‘Shallow,’ and that’ll be very well deserved.”

Leading up to the televised ceremony, TCM has launched its “31 Days of Oscars” program, which highlights an ensemble of Oscar-winning films from Hollywood’s golden era. It will feature the original “A Star is Born” from 1937 starring Janet Gaynor and Fredric March, as well as the 1954 version with Garland and James Mason.

Barbra Streisand and Kris Kristofferson later stared in 1976’s “A Star is Born,” before Cooper and Gaga took on the iconic romance. Yet Malone and Karger insisted its Garland’s performance that has become the most iconic in film history.

SEAN PENN WRITES GUSHING ESSAY OVER 'A STAR IS BORN'

“A lot of it has to do with the timing of when it was in her career,” Karger explained. “It was after a long period of years where she hadn’t been around much. Things were not going so well in her life. It was kind of a comeback performance for her 15 years after ‘The Wizard of Oz’ and the earlier stages in her career when things were going so smoothly and great. … You could relate it to the ups and downs in Judy’s own career.”

“People weren’t sure that she was going to be up for the role,” shared Malone. “… But Judy Garland was someone that no matter what was happening in her personal life, she always brought it when she was onscreen. You hear her powerful voice. She puts so much into it. It feels like a very personal film for her… it just makes that performance so much more special.”

Karger, who previously interviewed Cooper on TCM, revealed that as the film’s director, he was determined to pay tribute to the previous versions of “A Star is Born.” Gaga herself referred to the movie’s history as “a traveling legacy.”

“When we first see Lady Gaga and she’s just dropped the trash off in the dumpster and she’s walking up a ramp, she starts singing the prelude to ‘Somewhere Over the Rainbow’ from ‘The Wizard of Oz,’ sung of course by Judy Garland,” explained Karger. “There’s a moment where Bradley Cooper is taking off Gaga’s eyebrow. That’s a nod to a scene from the Garland version with James Mason where he takes off a prosthetic piece of a nose that’s been put on her.”

“… Then, that great line where you hear Bradley Cooper say, ‘I just want to take another look at you’ to Gaga — that line is in all the different versions,” continued Karger. “[And] Bradley Cooper specifically put the bathtub scene in the version as a homage to the Kris Kristofferson and Barbra Streisand bathtub scene. That was very important for him to do that.”

When it comes to the legacy of “A Star is Born,” Karger and Malone have their own personal favorite leading ladies.

“I think mine is Janet Gaynor,” said Malone. “It’s hard. They’re all incredible women. Mine’s Janet Gaynor just because it was the first version that I saw and there was such a sweetness to her. She plays the ingénue really well and so surprised when she gets famous [in the film]. I love that transition, but then it’s hard to beat Judy and Barbra’s voices.”

“I’m going to say it’s a tie between Janet Gaynor and Lady Gaga,” said Karger. “… I really love that Lady Gaga brought so much of herself in her own personal and her own passions and interests to this role. That’s why we see her performing at a drag bar and we meet her LGBT best friends. I love that she was able to bring those aspects of her own life and things that were really important to her to this iconic story.”

“I think she’s so talented,” the 66-year-old told the Associated Press. “And I think she’s so incredibly brilliant. And I’ve been such a fan of hers. So when I heard about this, I thought, ‘This is perfect.’ And my mother would have loved this.”

Whether “A Star is Born” wins big on Sunday night or not, Malone and Karger said there’s no denying it will remain timeless. They said it’s a film worth watching simply to honor the impact it has had on Hollywood over the years.

“I think it’s a really timeless tale, the myth of getting famous, being discovered,” said Malone. “It’s got a great romance. It’s a lot of tragedy as well, and it’s interesting that it still continues today. … I thought Bradley did a great job of updating the story but still keeping the classic elements that make it so enticing. It’s really sad. It’s uplifting. [And] I think we all want that great romance.”