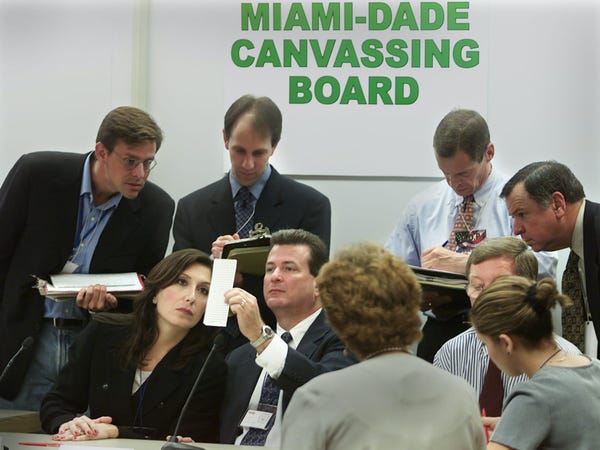 In 2000, the US was thriving economically and technologically. But when it came to politics we were on pace for a major low point. And that all came to a head in the presidential election between Republican nominee, George W. Bush, and Democrat nominee, Al Gore.

In what would become one of the closest presidential elections in history, Bush won over Gore by a tiny margin of 537 votes. But how we got to that point showed the extremely ugly side of American politics.

Director Billy Corben ("Cocaine Cowboys", "Screwball") felt on the 20th anniversary of that contentious outcome it was important to spotlight what may be the most #BecauseFlorida moment in the history of the country. Not just to look at where we've been politically, but as a cautionary tale of what could come.

"537 Votes," a documentary Corben and his producing partner Alfred Spellman made with their own money, chronicles the circus that occurred in South Florida to decide the election in 2000 — which included a divided region due to the international custody battle over then 5-year-old Cuban citizen Elian Gonzalez, hanging chads on voting ballots, and Republican operatives like Roger Stone stirring the pot.

Corben is convinced what happened in 2000 could repeat itself during this year's presidential election.

"The question is, do the Democrats have the stomach and fortitude for the fight that they will have to undertake," Corben told Insider.

Corben and Spellman have prided themselves throughout their careers in staying outside of the Hollywood machine. But when they had wrapped "537 Votes" and hadn't identified a distributor to release it, one of the biggest fish in the Hollywood pond was there to help out.

Adam McKay, the writer-director known best for his comedies with Will Ferrell ("Anchorman," "Step Brothers"), was a huge fan of their work. Through a mutual friend — ESPN host Dan Le Batard — McKay was able to see a sizzle reel of the documentary.

"Their intentions rang clear in the sizzle reel," McKay, who's also created satire films such as "The Big Short" and the Dick Cheney biopic "Vice," told Insider, while on the phone with Corben last week.

With McKay now on board as an executive producer, "537 Votes" found a home at HBO Documentaries and got what Corben had wished all along: a voice in this year's election cycle.

"It was a labor of love," Corben said of his period doc. "We wanted to be involved in the 2020 cycle. We didn't want it to be Trump-centric, but we wanted it to be timely and relevant."

Roger Stone was interviewed before his trial

"537 Votes" is hardly a cut-and-dry look at politics run amuck. Thanks to Corben's unconventional style, the movie explores this moment in history with a lighthearted touch, which is something desperately needed in today's climate, McKay believes.

"There's always a bounce of life to his storytelling," McKay said of Corben. "I think that's the proper way to interpret this story that's tragic and ridiculous and absurd."

At times it also feels like a heist movie as it gives a blow-by-blow of how Republican operatives caused havoc during the recount process in Florida's Miami-Dade county.

One standout story is when Corben detailed the "Brooks Brothers riot," in which a demonstration took place with the goal of shutting down the recount. Thought to be just angry Floridians, it was later revealed that the protesters were paid Republican operatives. And getting those operatives to talk on camera was a colorful experience.

In the case of landing Stone for the documentary, Corben said he and Spellman had an unforgettable first meeting with the infamous conservative political consultant last August at a Fort Lauderdale steakhouse.

"We got to the restaurant and within minutes the skies opened and it got pitch black and there was a thunderstorm that came out of nowhere. Suddenly the doors opened [with] this storm raging, and in came Roger Stone without a drop of rain on him," Corben said, which brought a roaring laugh from McKay.

"We broke bread with him. He ordered a Stoli martini and said to us, 'Don't tell anyone I drink Russian vodka,' and agreed to an interview, but said we should 'schedule it forth with, as time is of the essence.'"

Corben said through post production what he loved about working with McKay were the notes of encouragement to keep things light in the doc, which paid off.

"While I wouldn't call '537 votes' escapist fare, we certainly approached it tonally the way we did because we didn't think people would opt in for some of the Trump s–t show," Corben said. "We needed to create something that tonally was going to be more watchable."

By the end of the movie, Corben ties in the current election and drives home the importance to vote. But both he and McKay believe even if Trump loses on election night he will not fade into the background.

"I think he uses his lame duck session to dismantle the government and maybe try and create some sort of crisis that does allow him to stay in office even though he lost the election," McKay said. "I don't think it's going to end well."

"I don't think we've seen the bottom yet of what this man is capable of," Corben added.

"I think the lesson in the doc is that close elections can be stolen," he continued. "If this is a close election in a number of swing states I think it's going to be a legitimate constitutional crisis — far worse than 2000 ever could be."