Amanda Holden, 49, who has judged Britain’s Got Talent since 2006, has been an announced as ITV’s new “head judge” after Simon Cowell, 60, was unable to continue filming after breaking his back last month. The Heart FM presenter donned a slashed golden dress for tonight’s semi-final.

After Alesha and David walked out onto the stage, Amanda was standing up on a platform where she stunned in a long, low-neck, golden number, which had long sleeves with tassels on the end.

The star wore her curly golden hair in a classy ponytail with a few of her tresses hanging down.

Ahead of tonight’s return, producers said it was the obvious choice for Amanda to have the deciding vote in Simon’s absence, if the other judges are split over any of the acts. 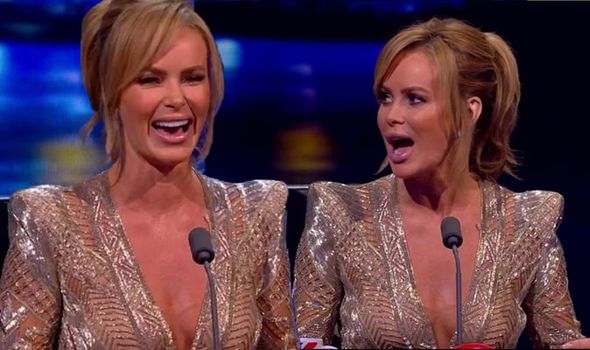 “It makes total sense for Amanda to be head judge with a deciding vote in a deadlock situation,” a source began.

“She’s the only one, other than Simon, who has been there since Day One and has seen it all.”

They went on to explain to The Sun: “She cannot wait for the responsibility boost and is certainly going to take it in her stride.”

Simon is missing the pre-recorded show with his co-stars after he broke his back in three places last month.

The ITV judge had a metal rod inserted into his back after falling off a bike at his home in Malibu, according to the same publication.

Elsewhere, Amanda opened up about Simon looking the “best he’s looked in years” after “losing his confidence” in an unearthed interview.

When the radio host was speaking ahead of last year’s BGT series, she said how delighted she was to be back on the show.

“David was his usual funny self and Simon was in the best. Ant and Dec have come back like a phoenix – an even better one than before.”

She went on to share her thoughts about Simon after his dramatic transformation at the time.

She told The Irish Sun last year: “He looks the best he’s looked in years. And he seems back to himself.

“I think he was losing his confidence a little bit but he’s back now, in his own, proper skin.”

Amanda then said: “But we don’t have a judges’ WhatsApp group because Simon doesn’t have a bl***y phone any more!

Simon’s weight transformation comes after he collapsed after falling down his stairs in 2017.

He was rushed to hospital with fears he had broken his neck, but fortunately made a full recovery.