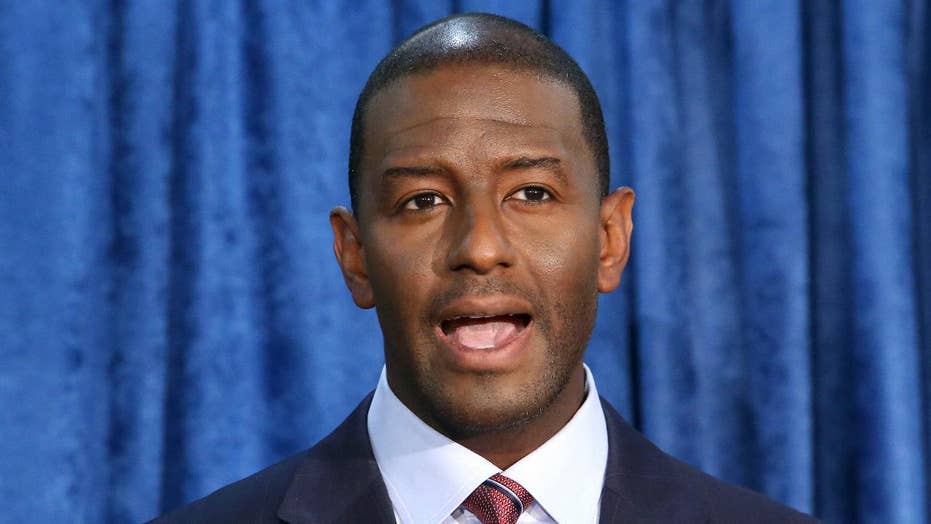 Gillum's new gig comes amid news that state officials in Florida are moving forward with an ethics complaint after finding probable cause on five of six counts that he violated ethics laws in 2016 by accepting gifts from lobbyists during trips.

"Thrilled to be joining @CNN as a political commentator," Gillum tweeted Tuesday morning.

Gillum’s lawyer, Barry Richard, said late last week after leaving a hearing at the First District Court of Appeal that his client's case will head to an administrative judge.

“We’re going to have a full evidentiary hearing before an independent judge. It’ll be open to the public, and everybody can decide for themselves,” Richard said, according to the Tampa Bay Times. “There for sure will be no settlement.”

Despite his narrow loss in the gubernatorial race to Ron DeSantis in November, Gillum has remained in the spotlight as a potential 2020 presidential candidate thanks to his fundraising influence, volunteer lists in the swing state of Florida and a high-profile meeting with former President Barack Obama.

But the ethics case continues to loom over him. The complaint against Gillum was originally filed last year by Tallahassee businessman Erwin Jackson, who alleges that the former mayor received gifts above the state limit of $100 on trips to Costa Rica and New York City.

The five counts being leveled against Gillum all relate to trips he took with lobbyist and former friend Adam Corey before Gillum launched his gubernatorial campaign. The trips also coincided with attempts by undercover FBI agents investigating public corruption to get close to Gillum.

On one trip to Costa Rica, Corey – who has since turned on Gillum – sent the former mayor a calendar invitation for the two to meet with an undercover agent posing as a developer from Atlanta. During another trip – this time to New York City – Corey took Gillum on an outing, alongside at least two undercover FBI agents, that included a boat ride around Liberty Island and a performance of the Broadway show “Hamilton.”

While Gillum was not present on Friday for the hearing at the First District Court of Appeal, his gubernatorial campaign last year released documents that it said proved Gillum paid for all of his expenses on the Costa Rica trip and that his brother, Marcus Gillum, gave him the ticket to “Hamilton.”

In an email, however, Corey wrote to Gillum that one of the undercover agents and his “crew” had tickets for “Hamilton.” Gillum responded by saying, “awesome news,” according to the Tallahassee Democrat newspaper.

Gillum has since stated that he didn’t know he was dealing with undercover FBI agents and has long maintained that he met with the FBI in 2017 and was told he was not a focus of its investigation.

The news from the appeals court on Friday comes a month after Paige Carter-Smith, former executive director of the Downtown Improvement Authority, and Scott Maddox, one of Gillum's former colleagues on the City Commission, were indicted on numerous federal charges in a public corruption investigation. No charges, however, were brought against Gillum in that case.

With Gillum deciding not to settle with the ethic’s commission – which would have likely involved him admitting some guilt – the case goes next to the Division of Administrative Hearings in a public hearing.