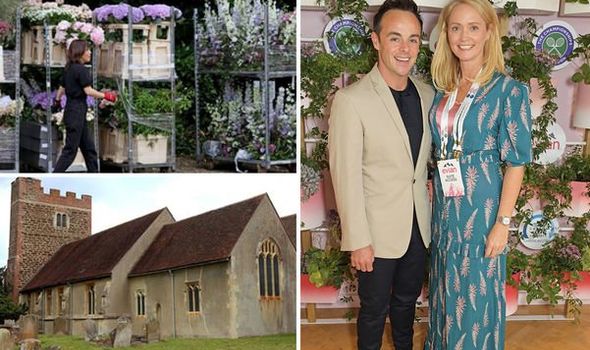 Ant McPartlin, 45, and Anne-Marie Corbett, 43, will exchange vows at St Michael Church in Heckfield this weekend. The couple announced their engagement back in January after getting together in 2018.

Today, pictures emerged of the venue, where various decorations have been dropped off.

The pair will marry at the historic church, which dates back to the 13th century.

The church, which features rows of wooden pews and a high ceiling, is a popular venue for weddings.

It is surrounded by green scenery, including a Garden of Remembrance.

Ahead of their big day, multiple people have been spotted dropping off the likes of temporary fencing, flowers and red carpet-esque red robes.

It is reported that the soon to be married couple will celebrate their reception at a Georgian stately home-turned hotel nearby.

Ant and Anne’s wedding reportedly cost £100,000, which includes the bill for guests to stay at the luxury venue.

The couple are understood to have invited 100 guests.

A source told The Sun: “Neither of them want the razzmatazz of a showbiz wedding.”

Instead, it is believed the pair planned a “simple but beautiful” day.

The publication also claims that Ant and Anne have hired a marquee in the grounds and have tight security in place.

A spokesperson for the pair told the Mail online: “Ant and Amzie are delighted to announce their engagement.

“The proposal took place on Christmas Eve at home in a very romantic setting.”

It is said that Anne initially wanted to get married abroad, but this couldn’t happen due to the coronavirus pandemic.

The former couple were married for 11 years.

A statement at the time read: “Ant is very sad to announce that, after 11 years, he is ending his marriage to Lisa McPartlin.

“Ant asks for privacy at this difficult time, for both himself, Lisa and their immediate families.

“No further statements will be made.”