By implementing matte painting and rear projection, along with other tools and tricks, Fincher and his team minimized the budget necessary to assemble an authentic period piece, manipulating L.A. exteriors when necessary, or avoiding them altogether. Ultimately, what these tools offered Fincher was complete control of every image, and interestingly, the director himself served as the film’s overall VFX supervisor, though he chose to go uncredited.

At the same time, it took a village to bring his vision to life. Supporting him in his ambitions, alongside Zheng (Artemple Hollywood), were VFX supervisors Simon Carr (Territory Studio), James Pastorius (Savage VFX), and Pablo Helman (ILM). His fourth key collaborator in this arena was Peter Mavromates, who served as co-producer, post-production supervisor and VFX producer.

In conversation with Deadline, Zheng breaks down the shorthand he’s developed with Fincher over the years, and the approach he took to getting “David’s imagination” on each of his longtime passion project’s frames.

DEADLINE: How did you get involved with Mank? What excited you about taking this project on?

WEI ZHENG: I’m pretty lucky that since Zodiac, I’ve had the opportunity to work for David and Peter, knowing what David’s looking for, in terms of aesthetic. [But] David really is the visual effects supervisor [on Mank]. He was very involved with every shot from the design stage, all the way to the final DI. He’s probably [one of] the most knowledgeable directors, [when it comes to] digital technology, so he was on top of everything. Also, Peter is producing it, and they’re definitely the guys who should take credit for the visual effects.

In terms of Mank, at the end of Mindhunter Season 2, Peter mentioned, “We’re doing this project and trying to get ideas for a few sequences.” Shortly after, production started, [and] I had a pretty good idea [of what to expect] because it’s a period piece, 1930s. We did Mindhunter in the ’70s and ’80s, so it’s really a pleasure working on a historic piece.

So, before the pandemic, they started shooting, and David really set up his shots by himself with the DP. Once in a while, he needs specific feedback from a visual effects point of view. But [the approach to a project like Mank], David knows really well.

In January or the end of December, David was shooting stuff downtown. He had me over to discuss a couple of scenes…using rear projection technique with today’s technology. So, he asked me to produce the content [to layer into those shots]. One is Catalina Island, the beautiful girl in the white dress with the umbrella, on the ferry boat. So, we generated that background, and the back end of the boat, with Catalina in the background. Then, another shot is for the ending of the movie, [depicting] Rio de Janeiro.

We produced the content right in the middle of production, as David was shooting other scenes, so he had me prepare and deliver that. So, after we had a pretty good idea, in terms of the time and location, then we started rolling. Before he’d finished the show, it came in batches, some sequences we finished editing. David would send over a very clean, detailed description about a shot—what needed to happen, with mock-ups—and then I would take a look at that, and we started rolling.

[It] was going really well, and then the pandemic hit. Luckily, everything wrapped before that, but we just hit the ground running hard in March, and had this lockdown to deal with. But [because] everything was planned so well from a production point of view, it was a really well oiled machine.

DEADLINE: What did Fincher communicate early on, in terms of his vision for the VFX, and the roles they would play in shaping the film? As you mentioned, you’d end up embracing modern equivalents of period techniques like matte painting and rear projection.

ZHENG: I mean, we all know David started at ILM. He knows visual effects so well, [and found] a very smart way to utilize today’s technology, in terms of [bringing to life] something very hard to shoot, practically, more economically, shooting certain things on set, and planning for post to really get the best bang for the buck.

Having said that, David knows what he can get from post—for example, what a 2D matte painting can do, and what a 3D matte painting can achieve. There were quite a few 3D-heavy matte paintings in the scene, like establishing shots. But they never became something we [needed to] discuss. He already knew what can be; he was already expecting the result, just because prior to the project, we had established that workflow.

Matte painting approaches the environment slightly different than [full] CG. The matte painter is a painter, right? So, there are a lot of artistic advantages you can take advantage of, rather than heavily depending on computer rendering power. From a creative point of view, you can shoot more believable, potentially invisible visual effects. Today’s technology is so advanced, and computer graphics are so good, but somehow, the battle of fighting for the CG look is always existing. If you’re not careful, even if you have super machine rendering, that’s translating into time, and also into budget. But matte painting technique [is done by] an artist who is a painter, rather than a computer graphic technician.

So, from a creative point of view, David knows, “I can get the most of the artists’ talent by using matte painting technique.” Basically, the result is more photorealistic, also rendering super fast, because the techniques are slightly different than a hardcore CG approach. [With] David, everything is methodically planned. He already has everything in his mind when he sets up the shot, so it’s just, “Here’s the shot. I need this; I need that. Let’s get going.” So, that’s how we can get this moving really fast.

Typically, our guys [make notes] and have a plate, and then I’ll mock up something really detailed to get his approval of the layout, the composition, the style, the lighting, which later can be part of the final shot. So, there is not a back-and-forth miscommunication; everything is talking through the picture. 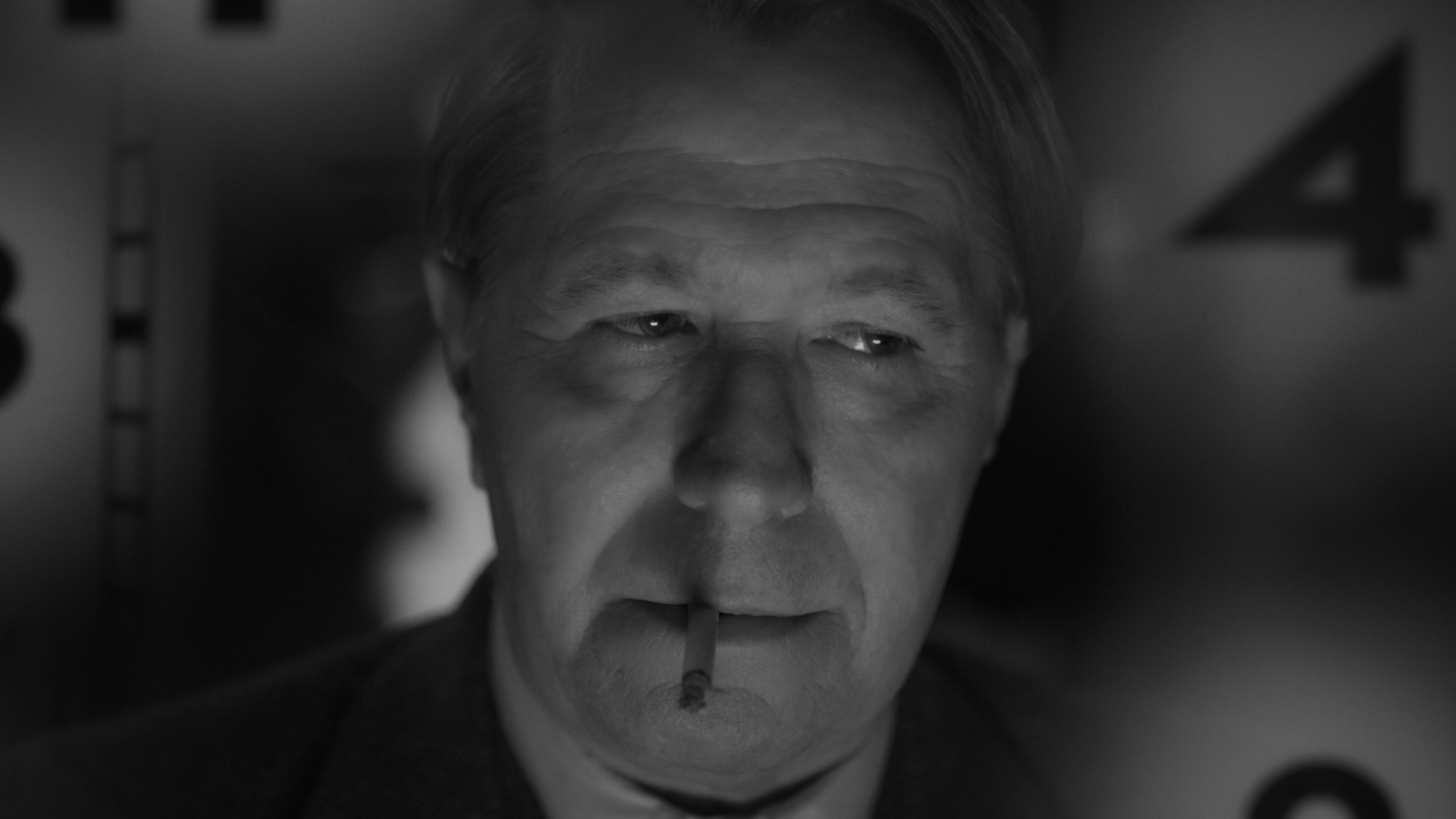 I’m communicating on a daily basis with David. After we’ve nailed the look, which is super detailed stuff—almost like the [final] shot, but just a single image—then we move forward to the next stage. If we need modeling, we model something. Then if we need texture, we [add] texture.

Puffy clouds…In this movie, you can see there are a lot of cumulus clouds, and that is another element constantly showing in the shot. Art deco buildings, puffy clouds and palm trees. We added tons of palm trees, here and there. Those are the visual elements we were constantly going back [to]. Also, during the ’30s, on streets in Los Angeles like Wilshire Boulevard, stores didn’t have signage like today. So, [we added] very clean art deco buildings, but [also] signage. On top of that, we did research [for] a lot of the exteriors and interiors, [including those at] Hearst Castle, just to make sure that historically, the style was accurate.

DEADLINE: I know rear projection came into play in driving scenes. Tell us a bit about how you used that technique.

ZHENG: Basically, we create this content, and then we have this stage with an LCD wall. Then, they have this little built set with the LCD wall, and display the content we’re creating. So, it’s exactly like a rear projection technique [of the past], only today, you get 4K resolution, and the content can [be] completely fabricated to the perfection the director is looking for—the perfect angle, perfect lighting. Then, the shot, combined with the actor or actress in front of that wall, allows you to achieve the final shot.

ZHENG: I don’t want to speak for David, but this is just my natural reaction. Today, if you’re shooting Wilshire Boulevard, you’re not going to have a background that is period-correct, right? It’s all modern. Also, think of the logistics. That’s almost impossible. You’re shooting several blocks. I mean, are you going to block the traffic? It would probably be really difficult to shoot that [on location] and achieve the result he likes. So basically, he has a car, and an actor sitting in the car. Now, whatever environment he likes, we just fabricate it. So, the result is probably more ideal for him. Also, budget-wise, it’s more friendly. So, that’s just a win-win situation for the production.

DEADLINE: The skies depicted in Mank are pretty spectacular. What inspired you to use the Unreal Engine to create them?

ZHENG: You know, the Unreal Engine is pretty popular right now, so the concept is very similar [to rear projection]. It literally is a rear projection technique. The concept is still the same, but just because the technology has evolved so much, it’s much more powerful, much more capable to do the shot. [With] the Unreal Engine, you’re sitting there saying, “Hey, that’s not ideal. Maybe we can tweak this a little bit.” So literally, you can work on set to make a little adjustment here or there. The Unreal Engine provides the opportunity of getting the environment beautiful for the specific shot.

DEADLINE: What in your work here did you find most challenging?

ZHENG: David is obviously a very methodical director. Detail is super important, so on top of all this technology, all technique, technique is just a tool. The final, most important thing is image quality, and that’s probably always a challenge. I wouldn’t say on this movie that we hit a wall or something, that we don’t know how to do a shot. It’s not like that. We always know how to achieve the shot. [But] the look of the frame is always the most important part. The challenge is to achieve the final image David has in mind.

You know, I did a lot of Star Wars films, for example, when I was at ILM. On tentpole movies, it’s always directors saying, “Give me the best. Knock people’s socks off.” So, gradually, you’re kind of brainwashed. Like, “Okay, the shot needs to be spectacular.” But for David, it’s not [like that]. David is more realism, more believable. In this project, for quite a few shots, I mocked up something and thought, “Oh, that’s really cool.” David liked it, but would comment, “Keep it simple.” So sometimes, the simple thing is the hardest thing to do in a scene.

He has a much higher standard, in terms of aesthetics. You know, what is a beautiful image? So, on every show I’m working for him [on], I’ll always try to spend most time, mentally, on [thinking through], “Oh, I need to give him something, which in his eye, looks good.” Rather than just the typical, “Wow, spectacular.” That’s something we always try to achieve, to get David’s imagination on the frame.

For a closer look at the work done on Mank by Zheng and his collaborators at Artemple Hollywood, click on the video below.