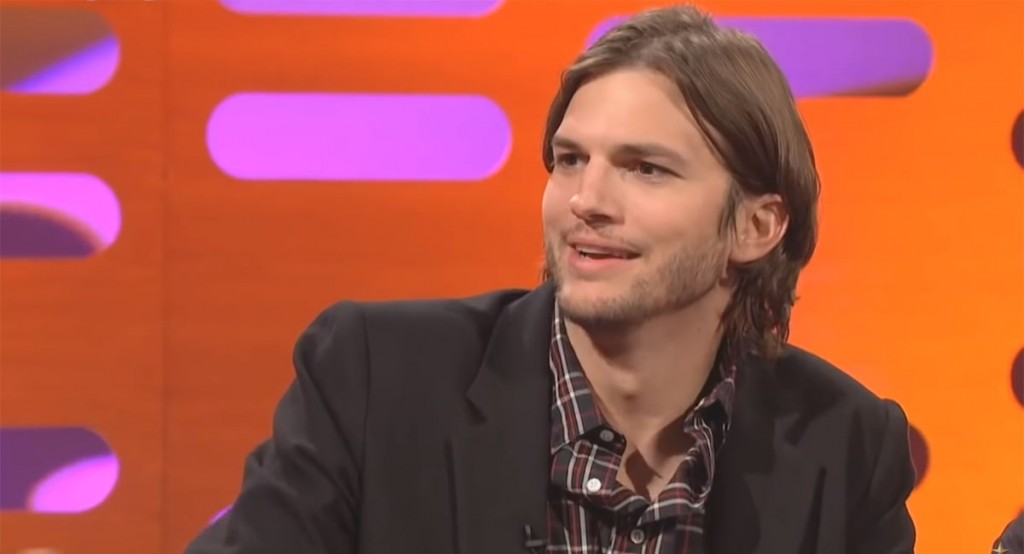 Ashton Kutcher was on The Graham Norton show last week. I’m going by the clip on YouTube, so I didn’t see the whole thing and assume that he was promoting The Ranch on Netflix. (Is anyone watching that? I have heard no buzz about it.) He told a story I’m assuming he thought was funny about making a thousand dollar bet with his buddy back in high school that he would go out with Jennifer Aniston at some point. When he finally became famous and got the chance to meet Aniston she was married to Brad Pitt. So he asked Pitt first for some reason, because men own us, and Pitt was like “whatever man” and kept smoking up (I’m taking creative license with this story). When Kutcher asked Aniston she wisely said “no” though. Can you imagine?

I made a bet when I was in high school. You have to imagine I’m living on a farm in the middle of America, really having no chance of living a happy life. Sitting around a basement with my buddies making bets… I say [to my buddy] ‘I bet you $1,000 dollars that one day I will go on a date with Jennifer Aniston.’ I’m 17 years old, she’s like on my screen saver on my computer. Four or five years later I actually meet Jennifer Aniston. She’s married to Brad Pitt at the time. So I went to Brad Pitt and I asked him permission to ask his wife out.

I said ‘Listen I made this bet with my buddy. You’re a cool guy, you’re going to let this go down, right?’

So I asked her and she turned me down. She’s like ‘That’s not a good idea. No.’

Ashton Kutcher has blocked both Kaiser and me on Twitter so he’s not likely to see this. I get it, he was young and wanted to win this long standing bet and get to know his teenage crush, that part isn’t that bad, but it’s a story that doesn’t age well. A lot of things Kutcher has done don’t age well. He’s matured and grown though, we all have, and I have to say that he looks hot now. What is wrong with me? He needs to get rid of that Shaggy from Scooby Doo beard though.

Comedian Greg Davies was on too. I know him from a show now on Netflix called Cuckoo with Andy Samberg. (That’s mildly funny but it made me cringe too much. I didn’t stick with it. Incidentally Davies is huge, he’s 6’8″.) He told a story about shagging his girlfriend in his parents’ garden and his granddad coming around the corner. That’s well worth watching.

Also I think Ashton and Mila are cute together. I said it!

Night out with the wife

Night out with the wife