Barack Obama is sharing his support for the NBA and WNBA athletes and coaches who are making their voices heard. The former president took to Twitter on Wednesday night to express his appreciation.

“I commend the players on the @Bucks for standing up for what they believe in,” Obama wrote, referring to the decision made by the Milwaukee Bucks to boycott their scheduled playoff game against the Orlando Magic in the wake of Jacob Blake’s shooting by police.

Obama went on to commend “coaches like @DocRivers, and the @NBA and @WNBA for setting an example.”

“It’s going to take all our institutions to stand up for our values,” the 59-year-old added.

I commend the players on the @Bucks for standing up for what they believe in, coaches like @DocRivers, and the @NBA and @WNBA for setting an example. It’s going to take all our institutions to stand up for our values. pic.twitter.com/rUGETgAt7P

Following the Bucks’ strike, the NBA announced that Wednesday’s three games — Bucks vs. Magic, Houston Rockets vs. Oklahoma City Thunder and Los Angeles Lakers vs. Portland Trail Blazers — have been postponed. Game 5 of each series will be rescheduled.

This being said, LeBron James took to Instagram to clarify the use of the term “postponed” in media coverage, to emphasize the significance of the protest. Sharing a screenshot of a news report, James wrote, “Boycotted not *postponed.” 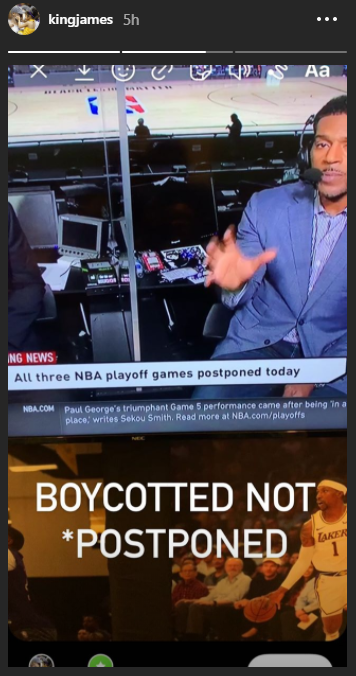 Soon after, Major League Baseball joined the cause when Milwaukee Brewers and Cincinnati Reds players became the first to sit out of their games on Wednesday.

WNBA games between the Washington Mystics and the Atlanta Dream, the Los Angeles Sparks and Minnesota Lynx, and Connecticut Sun against Phoenix Mercury were also postponed, the league tweeted.

Blake, a 29-year-old Wisconsin man, was shot in the back multiple times by police in Kenosha, Wisconsin, on Sunday. Graphic video footage of the incident shows Blake — who was reportedly trying to break up a fight when police arrived on the scene — walking away from officers, who have their weapons drawn.

When Blake approached the driver’s side door of a parked SUV, one officer reached out to grab his shirt and fired multiple shots into his back, the video shows. Civil rights attorney Benjamin Crump, who has been retained by Blake’s family, revealed in a statement that three of Blake’s children — ages 3, 7, and 8 — were inside the SUV at the time of the shooting.

Blake was rushed to a nearby hospital for emergency treatment. The family’s attorney stated on Tuesday that doctors believe Blake will be left paralyzed by the incident.

The shooting sparked a wave of demonstrations and marches that at times turned violent when protesters were met with armed police forces.

Early Wednesday morning, a gunman fatally shot two protesters in the streets and injured a third. The suspect is a 17-year-old white male who was arrested by police after the shootings.