BLACKPINK is one of the most popular music groups out there, and it’s not hard to see why. Between dropping chart-topping singles, collaborating with huge U.S. names like Cardi B and Selena Gomez, and wearing some of the coolest clothes out there, it’s pretty much impossible not to fall down the BLACKPINK rabbit hole. And one aspect that will keep you up all night in a YouTube hole is searching BLACKPINK’s Jisoo’s best outfits. The singer knows how to pull off every look whether she’s at an interview, in a music video, or just rocking some casual clothes.

2020 has been a big year for BLACKPINK. After being on hiatus for a little more than a year, the K Pop group has come back with a vengeance. They started their comeback with a feature on Lady Gaga’s “Sour Candy” before dropping their own single “How You Like That.” To say BLINKs missed their girls is a massive understatement. The “How You Like That” music video broke the Guinness World Record for most view YouTube video in 24 hours. As for what’s to come, the group is teasing a collab with Selena Gomez and set to release a new studio album in September.

Even with so much BLACKPINK content this year, it isn’t enough. So, to help you get all the BLACKPINK fixes you need, I’ve compiled a list of Jisoo’s most iconic outfits. 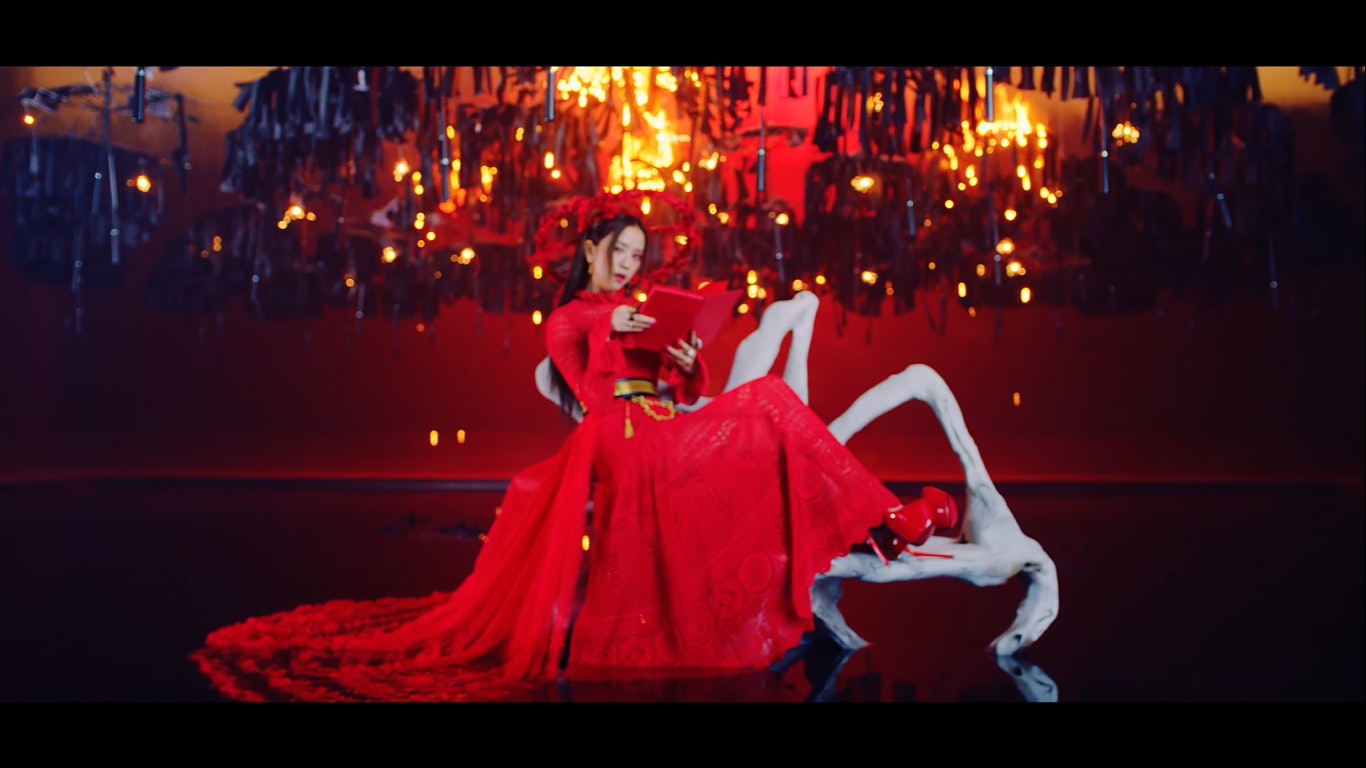 Jisoo looks like a queen in the blood-red, lacy Alexander McQueen gown she wore in the "How You Like That" music video. She even has a matching red book and coordinated headpiece for this outfit. It is a peak glam look.

"Ice Cream" is dropped on Aug. 28, and this ’90s-tastic outfit only got fans more excited about it. Jisoo’s rainbow, flower-power, crocheted top packs a serious punch.

"As If It’s Your Last" Music Video 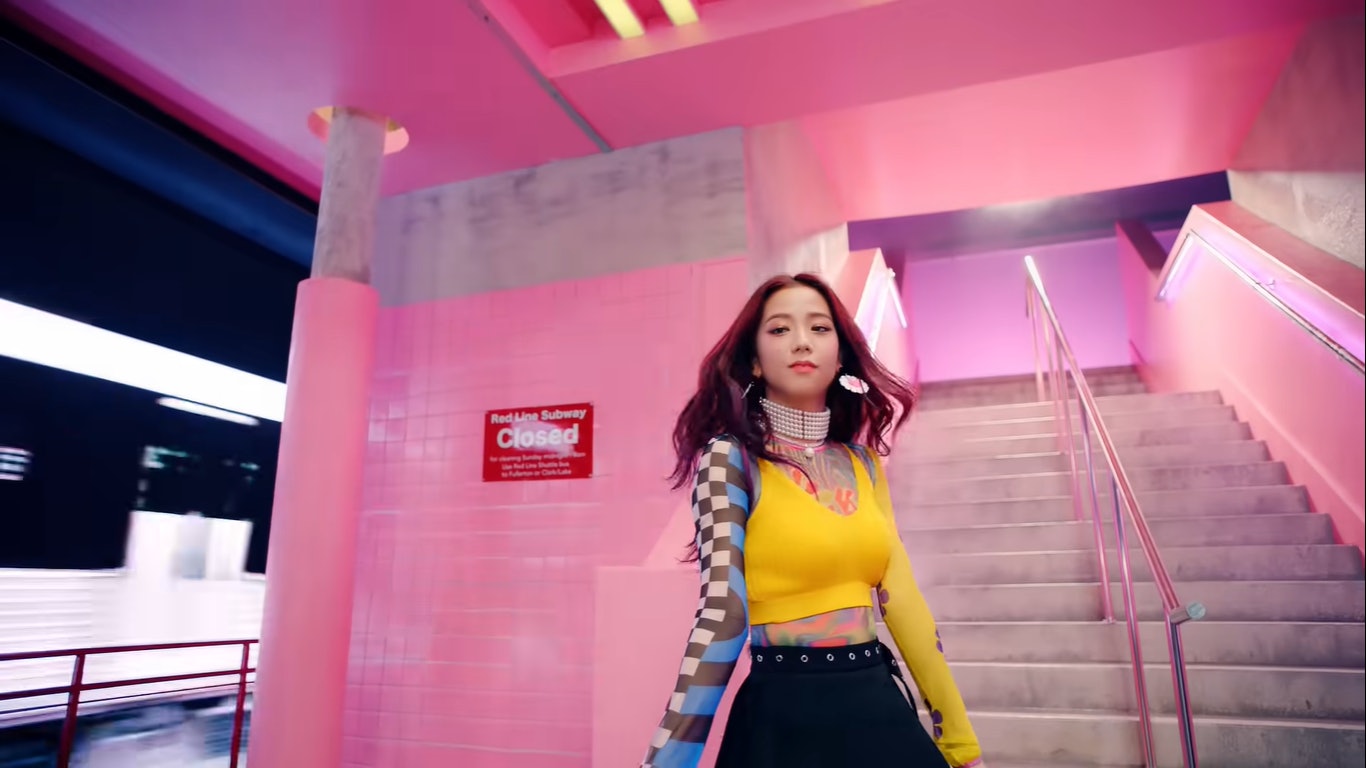 In the "As If It’s Your Last" music video, Jisoo proves that less is not always more. She rocks a see-through shirt that’s one half black-, white-, and blue-checkered and the other half yellow with flowers. Over the pattern-blocked sheer shirt, she has a yellow, cropped tank top. For jewelry, Jisoo wore a pearl drop necklace and a pearl choker that took up her whole neck. Everyone loves a matching set, and Jisoo’s bedazzled top and skort set from BLACKPINK’s 2019 Coachella performance is truly breathtaking. The embellishments and detail work of the outfit made each one of her dance moves pop.

When Jisoo isn’t in her fancy gowns or well-fitted pieces, she looks like an absolute style icon in her oversized t-shirt and striped jeans. For the above look, she went for the full Canadian tuxedo vibe with a jean jacket around her arms.

On Strahan and Sara 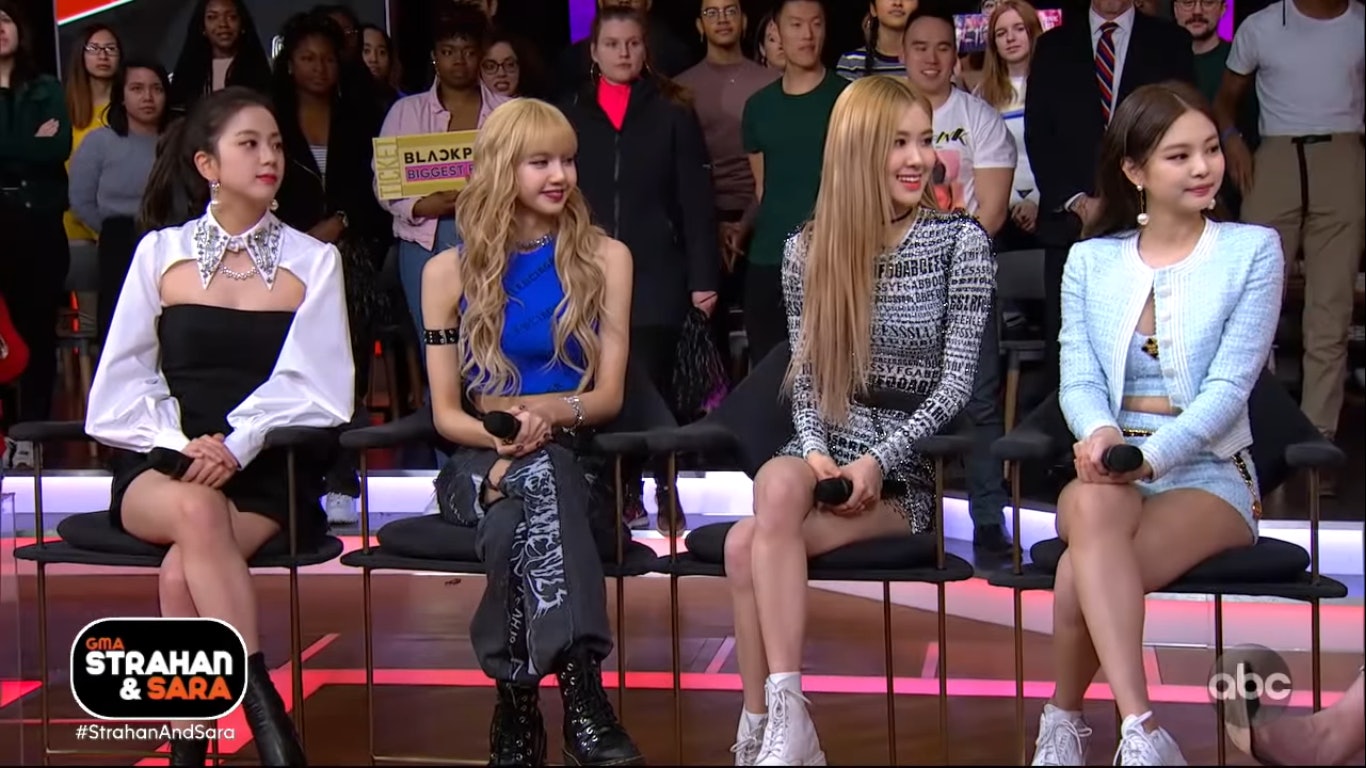 For BLACKPINK’s interview on Strahan and Sara, Jisoo’s dress combines a white button with a little black dress. However, the embellished collar, puffy sleeves, and open chest give this look a romantic, grandiose vibe. 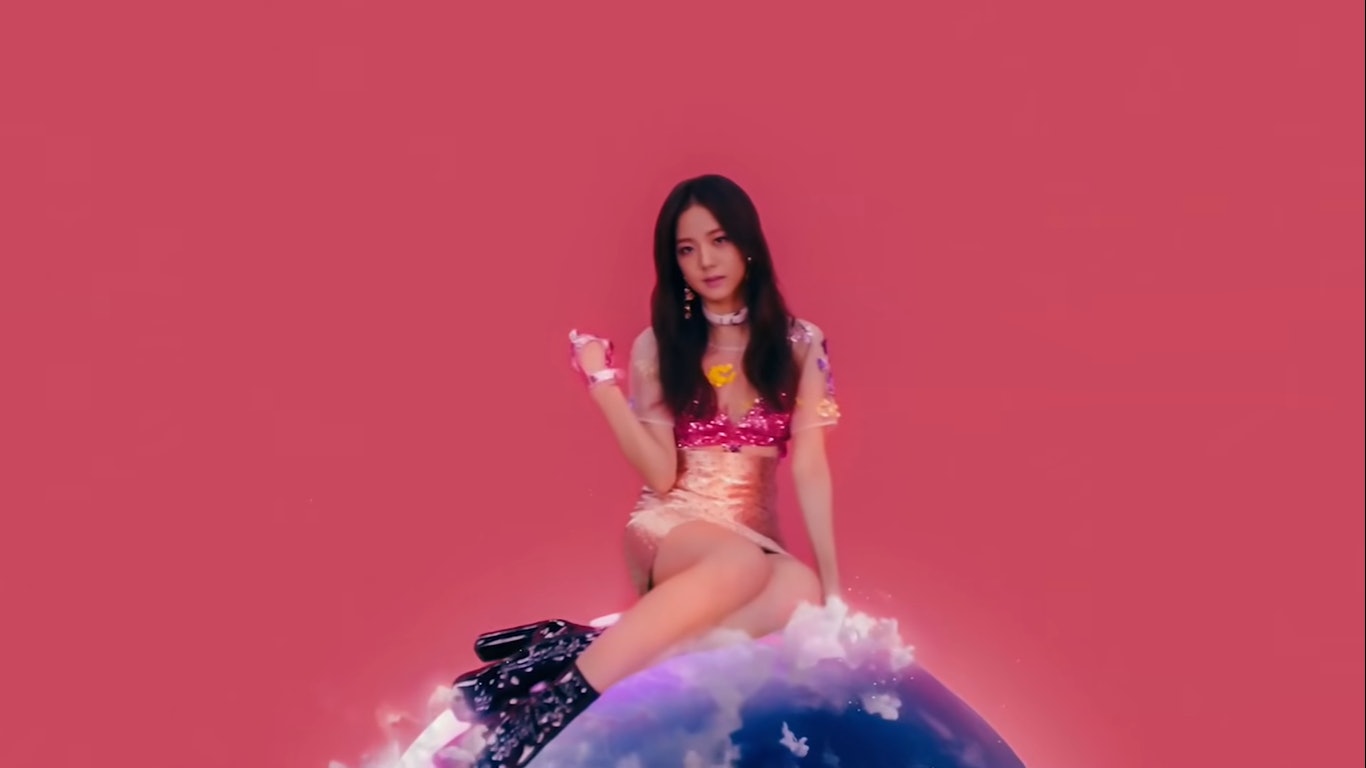 Jisoo should be ruling the world in the "Whistle" music video. Her gold pencil skirt, sheer white top with embroidered flowers, and glittery pink bra sound like pieces from three different outfits, but together, they are simply *chef’s kiss*. 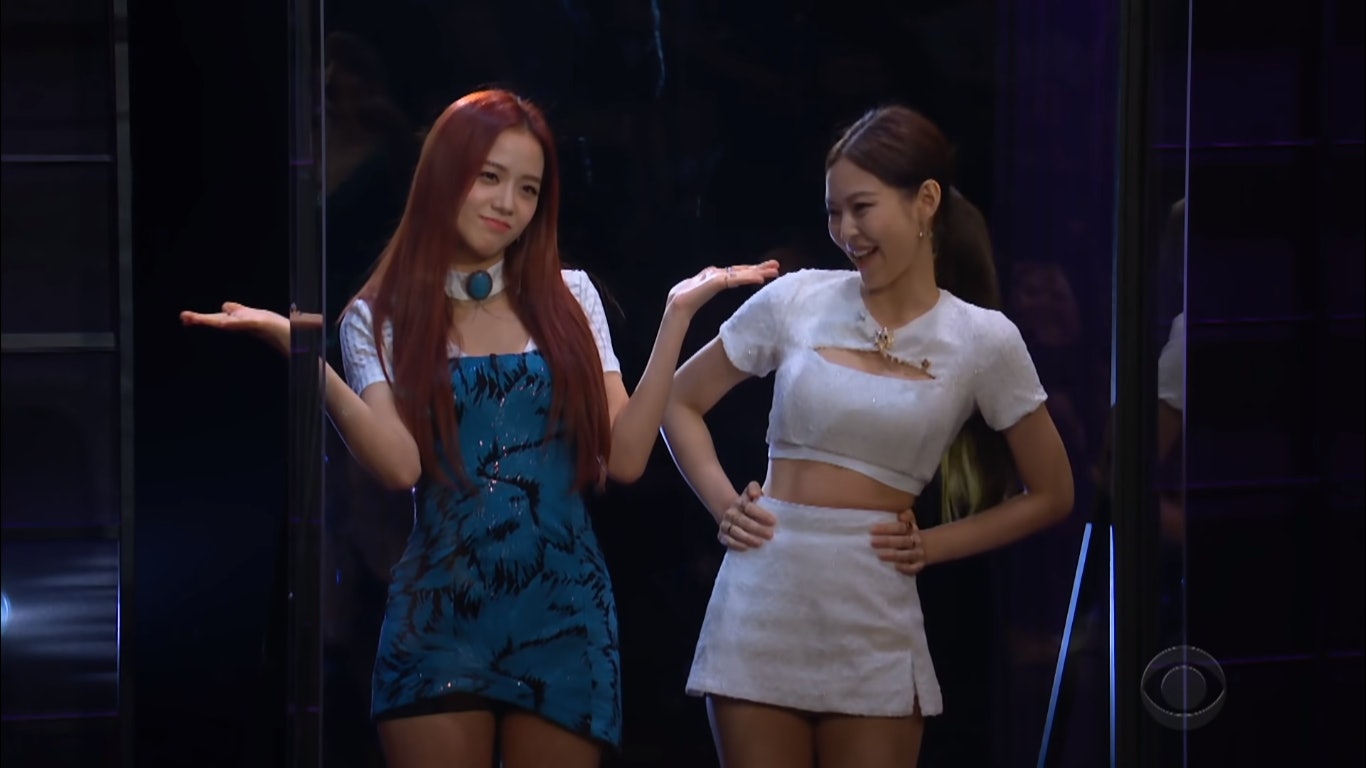 There are a lot of things that are iconic about Jisoo in when BLACKPINK went on The Late Late Show with James Corden, including her asymmetrical Halpern dress with subtle sparkles and an abstract design. The other extremely powerful moment is how Jisoo doesn’t flinch or even blink when the fruit smashes against the glass right in front of her face. She’s stone cold.

During the group’s appearance on South Korean music program Inkigayo in 2019, Jisoo looked like the most stylish in her all-black outfit with a sparkly, black harness that connects to her garter. Her shirt was one half cropped and one half oversized button-down, so she looked both streamlined and flouncy as she danced. In short, I’d let her murder me in this look. 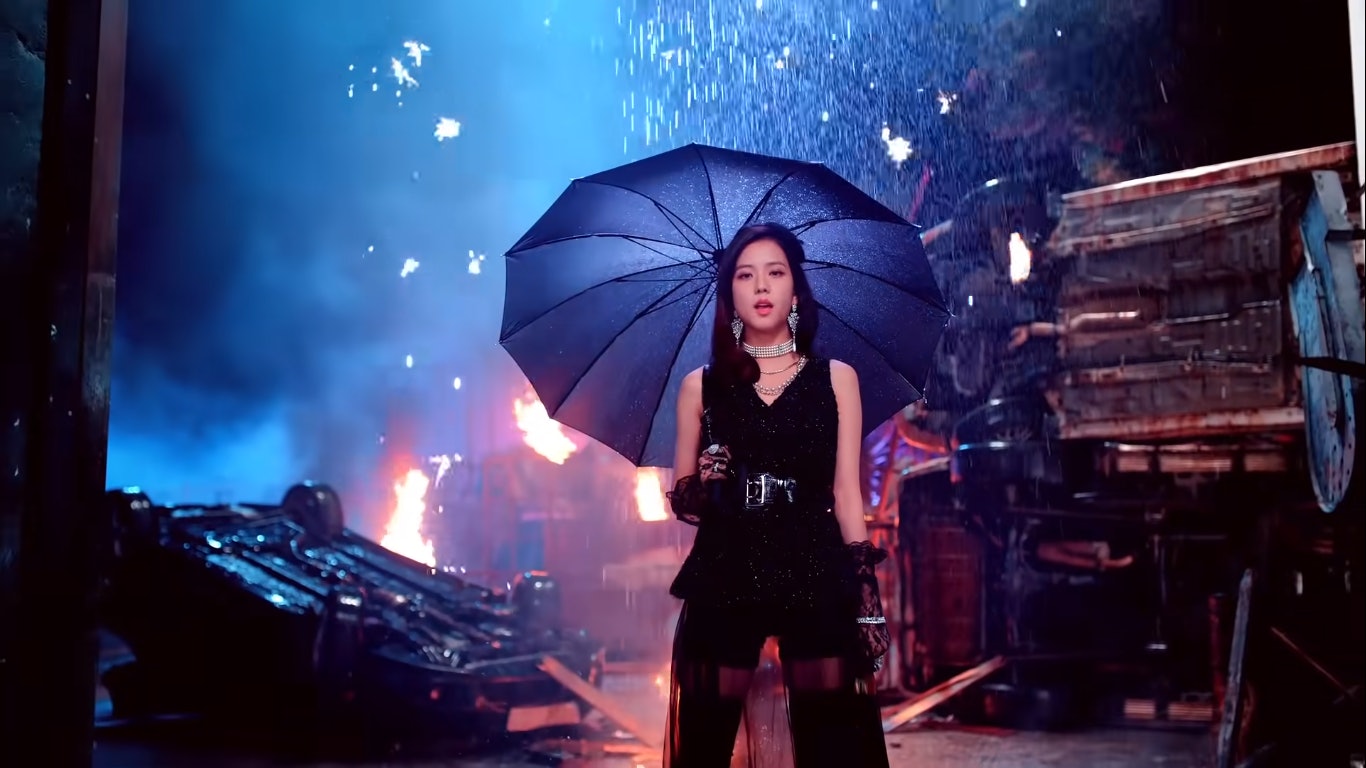 Jisoo is dripping in crystals in the "DDU-DU DDU-DU" music video. Seriously, the sparks raining down have nothing on her dress. And the sheer skirt adds more drama while showing off her thigh-high boots.

It is hard to believe that a year has passed since Meghan, Duchess of Sussex and Prince Harry announced that they had made the decision…

Man, 41, who got so out of breath walking his dogs at 30st that he ‘thought he was going to die’ reveals he’s shed 16st…