Well, this is just awful.

Once again, we have the unfortunate task of reporting that Nicholas Brendon has been arrested. The Buffy The Vampire Slayer star has faced a truly troubled road since the end of the show, including multiple arrests on various charges.

This time he reportedly was arrested for obtaining prescription drugs by fraud, resulting in a heartbreaking mugshot barely recognizable to his fans.

According to the arrest report, as first obtained by TMZ, police in Vigo County, Indiana say he was swerving all over the road — so when he failed to signal they pulled him over. It was at this time they observed the actor was sweating profusely and “appeared nervous due to a visibly racing pulse on his neck and shaking hands.”

Then the ID he gave them didn’t match — it said Kelton Schultz. Nicholas then explained, say the officers, that it was his twin brother’s ID. That checks out. As fans know, Nicholas does have an identical twin who appeared on an episode of Buffy as Xander’s clone, credited as Kelly Donovan — but Schultz is their real last name.

Unfortunately that wasn’t the only fake ID involved. Police say they searched the vehicle and found a “small plastic bag that contained crystal/powder residue” as well as a bottle of pills. However, the prescription was written to a third name, one that sounds like a bad joke: “Nicholas Bender.”

There was also a prescription for amphetamine salts written out to Kelton Schultz; Brendon reportedly told the cops he and his twin “have the same prescription and they fill each other’s prescription.” He admitted to them that he had taken the medication despite it being prescribed to his brother.

Cops called the K-9 unit to search the car and found more empty plastic baggies but no other contraband.

Police said they noted “signs in the vehicle that narcotics were potentially being trafficked” — for instance, it seemed despite the car being new and in good condition otherwise, there were flaps cut out of the carpeting and  screws removed from the paneling underneath. Like smuggling cavities.

Ultimately the police could not determine whether he was selling pills or just abusing them — but they believe “he was using his brother’s ID to procure more” and that the ID he gave them was “fraudulent.” They arrested him on charges of failure to identify for the fake ID and obtaining a prescription by fraud.

Prescription drug fraud is a serious crime. In Indiana, the first offense is a Class D felony — punishable by up to 18 months in prison. For a subsequent offense, we’re talking three to five years. 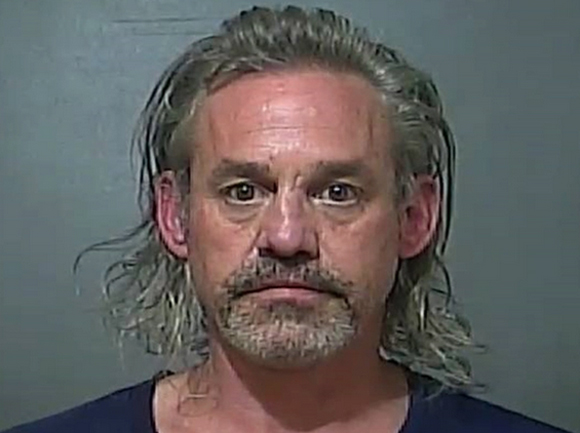 As we said above, Nicholas, who turned 50 years old this year, has been arrested several times before, most recently in 2017 on a charge of felony domestic violence after allegedly pulling his girlfriend around by the hair.

His history with alcoholism has led to many problems over the years, such as arrests for violent outbursts. He’s been open about how the drinking was a way to escape the pain he’s gone through his entire life after being sexually abused as a child. In 2015, after a shocking suicide attempt, he entered rehab. Unfortunately it just didn’t take.

We sincerely hope Nicholas finds peace one day, someday soon. While it’s too late to undo many of these mistakes, it’s not too late to turn it around.