You’re (not) the one that I want! Billionaire who paid £185,000 at charity auction for leather jacket worn by Olivia Newton-John in Grease returns it to the singer 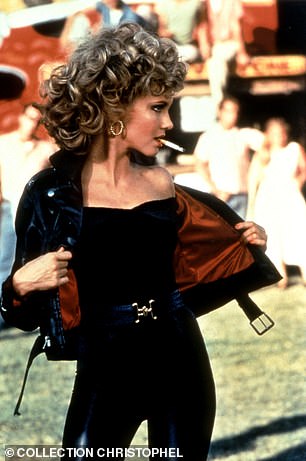 A man who bought the iconic leather jacket Olivia Newton-John wore in Grease at a charity auction for £185,000 has returned it to the singer.

Miss Newton-John had put the jacket and matching skin-tight trousers in which she sang You’re The One That I Want with John Travolta in the 1978 musical up for sale in Beverly Hills last month.

They went to separate bidders and fetched more than double the expected price in aid of her cancer treatment centre.

The anonymous buyer of the jacket presented the singer with the jacket during a meeting with her in California at the weekend, telling her: ‘It should not sit in a billionaire’s closet for country club bragging rights.’

He said he was Miss Newton-John’s ‘No 1 fan’ and wished her ‘God speed for a quick recovery’ in her latest battle with breast cancer.

The British-born star, 71, said earlier this month she had been diagnosed with the disease for the third time.

She will put the jacket on display at the Olivia Newton-John Cancer Wellness and Research Centre in Melbourne, which she co-founded after her first bout of cancer in 1992.

‘That is the most incredibly generous thing to do for me,’ she told the bidder. ‘I am just blown away.’