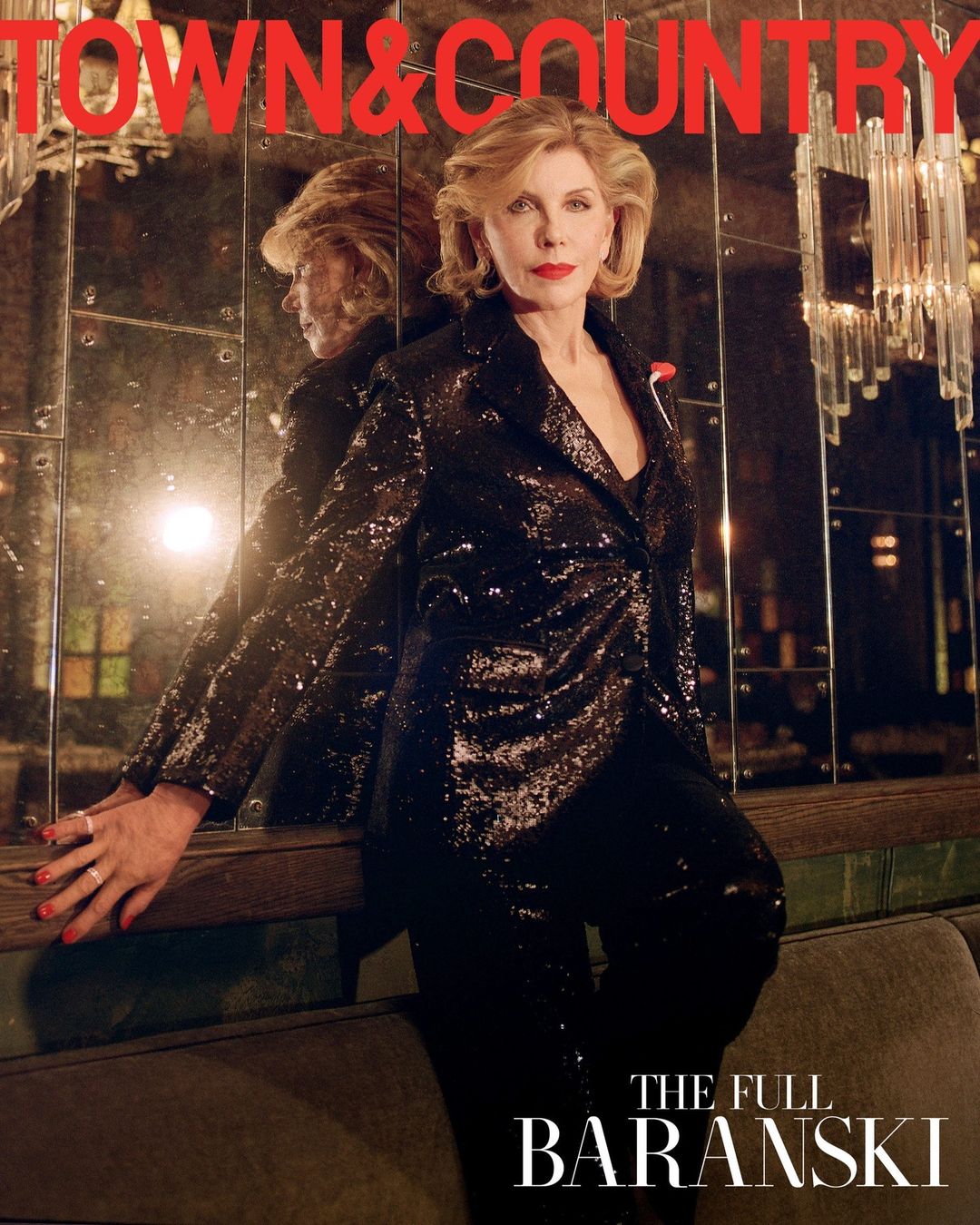 Christine Baranski had a very full career on stage for decades before she really became “famous” for her TV and film work. I love her because of Diane Lockhart, the character she played on The Good Wife, and now on The Good Fight. She’s very, very good at playing posh, cultured, educated American women, so much so that I thought that was her background. Like, I thought maybe she grew up in a well-to-do Connecticut family and she went to all of the best private schools. She did not! She grew up in a working-class family in Buffalo, New York. That was one of the most shocking things I learned from her excellent Town & Country cover story. She’s promoting The Gilded Age, which is basically “Downton Abbey, but in America.” Julian Fellowes created it and cast Christine as the Maggie Smith-esque snobby matriarch. Some highlights:

Playing a high-class grande dame: “It’s funny because I’m from this blue-collar neighborhood in Buffalo. I don’t know how it happened but… I always wanted to play queens or ladies rather than victims. I was never good at playing victims. I was always better at playing the character of the woman who was more in command of her life.”

She still loves Buffalo: “I love Buffalo. I’m a sports fan. I lived through four years of the Buffalo Bills losing the Super Bowl. I even have a T-shirt somewhere that says, ‘Buffalo, a drinking town with a football problem.’ I couldn’t wait to get out when I was 18. I had 12 years of Catholic school and the nuns. Now that I’m older, and I look back, I was part of a community, a tightly-knit Polish American community with traditions.”

Going to Julliard in the early ‘70s: “It was so exciting to be at Juilliard at that time,” she says, remembering how she would get cheap tickets to the ballet, the opera, and the Philharmonic. “It was before Wall Street appropriated New York and turned it into a city where you couldn’t afford to live. I didn’t have any money and somehow I saw great things and had a wonderful time.”

Her film/TV career: “My television career started late, when I was in my 40s. I didn’t really want to go into television, I wanted to stay and work in the theater, but it wasn’t paying bills. The script I read was written by a man named Chuck Lorre, who’s now one of the most successful men in television,” she says. It was for a sitcom starring Cybill Shepherd on CBS. Baranski’s character? A “divorcée with a wicked sense of humor” named Maryann. “I think people will always be intrigued by a sophisticated, witty woman. Look at Stephen Sondheim. Look at Company, the character that Patti [LuPone] is playing, that’s that woman, you know? Angry, kind of bitter, but turning it into humor and a kind of attitude about life. It’s kind of a fabulous construct. I’m glad to have been the first on television to do it.”

Wearing a corset: “One of the things about The Gilded Age that excited me most was that I would get to use training I haven’t used in so long because I’ve played contemporary characters.” The corsets, though, she says, “are just as uncomfortable as I remember.”

In the profile, Christine also speaks about what she calls “the Drexel connection” of The Gilded Age. Her late husband Matthew Cowles was from the Drexel family, one of the wealthiest and most well-connected banking families in New York during the so-called gilded age. Her late husband’s family established the Drexel Banking company WITH JP Morgan. Crazy. As she researched her role in the show, she ended up doing wider research into Cowles’s family. Which is pretty cool. Especially since a Polish-American girl from Buffalo married into that family!

Can I just admit something? While I get what Julian Fellowes is doing with The Gilded Age, my qualms are: no matter what, American high society was never a carbon copy of British high society. Fellowes’s cultural references and British-aristocratic milieu cannot be transferred to America directly, even if this was a time period where there were more of these society gatekeepers and angst about “new money.”