Christopher Meloni was spotted wearing a pair of very tight pants while shooting ‘SVU’, which led to one user calling him ‘thicc.’

Christopher Meloni, 60, was sure rocking the heck out of these tight navy pants! The bottoms in question just happened to be part of his wardrobe as character Detective Elliot Stabler while shooting Law & Order: Organized Crime in NYC on Tuesday, April 6. While Chris already looks incredible at 60, the photo caused a bit of a viral response — leading to one epic response from the actor himself!

“@Chris_Meloni you wanna explain why you have so much cake???’ one user wrote on Twitter, leading Chris to swiftly reply: “‘Sure— big birthday(60), big boy(200 lbs), big cake.” The actor recently celebrated his milestone 60th on April 2. As if his response wasn’t enough, the post also came along with a hilarious .GIF of Sponge Bob‘s famous starfish Patrick flexing his derrière muscles.

Other responds certainly brought the laughs on Twitter, including a post from journalist Peter Hess. “SVU is filming in park slope this week and someone in the neighborhood facebook group posted this photo of chris meloni,” he posted, along with a sweaty emoji — adding, “Law and Ardor: Special Thicctims Unit.” As if that wasn’t funny enough, several others shared the photo — which showed Chris talking to co-star Danielle Moné Truitt. “How do you think they make that donk-donk sound in each episode,” another penned, while a third went on to compare him to superhero icon Captain America. “Steve Rogers might have America’s A–, but that right there is New York City’s A–,” they added. 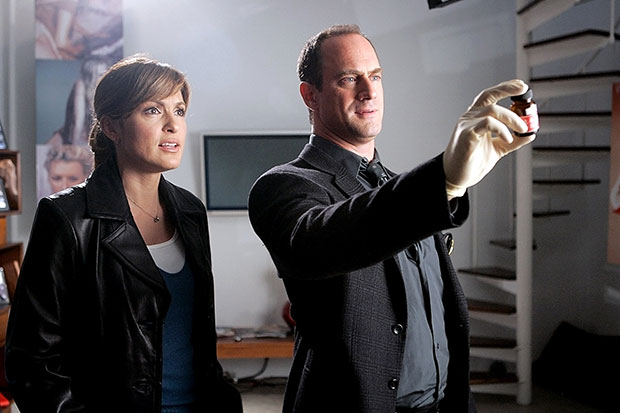 Fans have been waiting patiently for the upcoming Law & Order spinoff, which reunites him with his longtime co-star Mariska Hargitay. Chris departed Law & Order: SVU back in 2011 after character was put on leave following a squad room shootout where he shot and killed the young daughter of a rape victim. The character later retired from the NYPD, but has seemingly returned to service as part of NYPD’s organized crime division. Christopher and Mariska posted a selfie from their first day back on set, adding to even more buzz for the show which counts Taylor Swift as a fan (she named two of her cats for the characters).

Back in June, Chris reflected on where Stabler is at in his life a decade since fans last saw him. “I think he’s in a good place now with his family,” he said on SiriusXM’s The Jess Cagle Show. “I think he’s at a much better place with himself vis-à-vis the world. I think where we’re going to find him though, however, because he hasn’t been working in New York, NYPD in New York, I think he’s going to be coming back into a world that, I think as we’re all experiencing right now, has really changed with policing and the citizenry. It’s a new day and there are new ways of going about things. I think those are all issues to address in the show and I think it’s going to be a challenge for Elliot, one that I think he’ll meet,” he added.