What’s going on here?! Diddy and Yung Miami attended a party together on June 2, and she posted a picture of them holding hands at the event.

Diddy, 51, has sparked romance rumors with City Girls singer, Yung Miami, 27, after being photographed holding her hand. Both stars attended a birthday party for Quality Control’s CEO, Pierre “Pee” Thomas, and Yung Miami, who’s real name is Caresha, posted the photo of them together at the event. In the pic, they’re both in their formal, black tie ensembles while cascading down a suitcase — with their hands interlocked!

While most of the comments on the photo were flooded with fire emojis, letting Caresha know how good she looked, many fans also couldn’t help but wonder what she was doing so close to Diddy. “Hold on, why y’all holding hands?” one person wondered. The picture also immediately went viral on Twitter.

“Caresha looks good by why is she holding Diddy’s hand?” one fan tweeted, while another wrote, “Is Caresha dating Diddy???????” Most fans were totally confused by what the photo meant — are these two in a relationship, or was this just for a photo opp!? So far, both Diddy and Yung Miami have not commented on he status of their relationship, so we’ll just have to wait and see if more photos surface!

Yung Miami was most recently known to be in a relationship with a producer named Southside. She gave birth to the pair’s daughter, Summer Miami, in October 2019. However, in Sept. 2020, Caresha confirmed that she had split from the producer by posting a video of herself saying, “Here’s to Yung Miami being single!” Caresha also has a son named Jai, born in 2014, whose father was fatally shot in 2020. 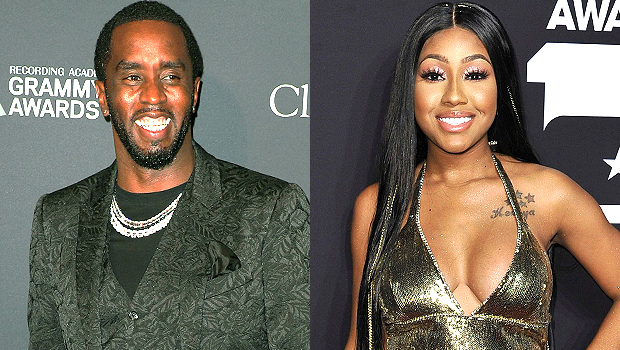 Meanwhile, Diddy has six children. He had his oldest son, Justin Combs, with Misa Hylon-Brim in 1993. With his ex Kim Porter, who he dated on and off from 1994 until 2007, he had three kids: Christian Combs and twins D’Lila and Jessie Combs. He also adopted Kim’s son, Quincy, from a previous relationship. While he was with Kim, Diddy also had a daughter named Chance with Sarah Chapman.

Interestingly, it was just last week that Diddy seemed to be hinting that be wanted to get back together with his ex, Jennifer Lopez. Amidst public buzz over Jen’s rekindled relationship with Ben Affleck, Diddy took to Twitter to share various photos of himself and J.Lo when they were an item back in the day. The Internet cracked up at his trolling, but also couldn’t help but wonder if it was his way of trying to get the singer/actress’ attention, as well!