The current stay-at-home guidelines may be leaving you a little stir crazy these days, but to borrow a line from his hit single, “Summertime,” DJ Jazzy Jeff is hoping to provide “just a little something to break the monotony.”

The DJ, producer and actor is the brainchild behind the “Break the Monotony Block Party,” an all-day virtual event happening May 9th, as part of the yearlong 30th anniversary celebrations for The Fresh Prince of Bel-Air while serving as a fundraiser for COVID-19 relief.

The event, which will be streamed via Instagram Live, will feature 90-minute sets from DJ D-Nice, Just Blaze, A-Trak, DJ Clark Kent and a headlining set by DJ Jazzy Jeff, among others. The online party will also serve as the launch for a new, limited-edition merch collection dubbed, “Fresh Prince/Summertime.” The 10-piece unisex collection is inspired by the Fresh Prince himself, Will Smith, as well as his Grammy Award-winning music catalog with DJ Jazzy Jeff. Twenty percent of all May 9th sales from the collection will be donated to No Kid Hungry, which works to provide healthy meals for children who have been affected by the COVID-19 pandemic.

“It’s humbling to see how The Fresh Prince of Bel-Air and our music has transcended time and continued to shape pop culture,” DJ Jazzy Jeff says. “I am blown away that 30 years later, this [show] is still on television and making a new generation of people happy.”

The DJ, who’s currently quarantining at home in Philadelphia, spoke to Rolling Stone about organizing the online block party, his recent reunion with his Fresh Prince castmates, and how his own experience with COVID-19 has empowered him to speak up in favor of staying home.

You collaborated on the development of the new Fresh Prince capsule collection. How would you describe the aesthetic?

A lot of the ideas and concepts are a mixture of nostalgia and today. There’s a bright, neon palette, and fans of the series will appreciate the nod to some of the imagery from the show’s opening credits with the graffiti pattern.

The beauty of it is we all know how things go in cycles. That shirt I wore on the show that I got thrown out in (referring to the recurring gag where his character is repeatedly kicked out of the house), I can wear that shirt 30 years later, and no one’s thinking, “He’s got this old Nineties shirt on.” In fact, they’re probably like, “Wow, it’s pretty cool.”

How did the idea for the block party come about?

I started live-streaming from home a month ago, every Saturday on IG live and Facebook. I thought, “I’m going to DJ and you’re going to dance in your kitchen with your significant other and we’re going to have a good Saturday.” But the idea came up that it would be cool to do a block party with not just me DJ-ing, but have a full day of some of the best DJs in the world. So I called up some of my friends and said, “Let’s make this an all-day thing;” let’s stay in the house, cook some food, make some drinks, and dance in the kitchen together.

How is this different from the DJ and producer battles we’ve been seeing on Instagram?

My wife and I have been front and center for the Instagram producer “battles” that have been taking place, but I wouldn’t necessarily do that; I’m very uncomfortable with the competition thing. I enjoyed how Babyface and Teddy Riley turned it into a celebration. When we signed off, we didn’t look back and say, “Babyface won,” or “Teddy Riley won;” we looked at it like we all won. 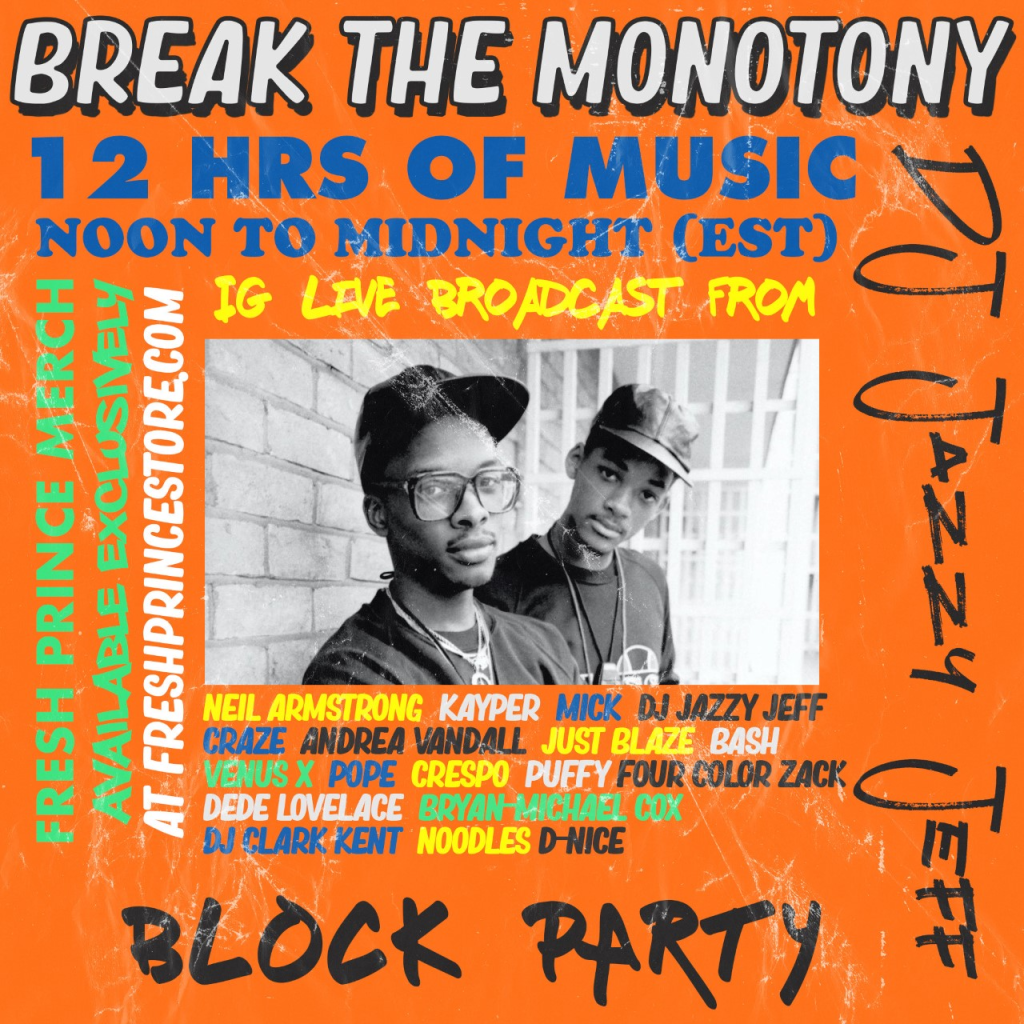 What was it like reuniting with your Fresh Prince castmates on Will Smith’s Snapchat show last month?

That was so much fun, and it offered people a great level of joy and entertainment. When Will called and said, “I’m going to get the cast together,” I immediately said yes. It was the first time all of us have gotten together since the show ended, but that would have never happened if it wasn’t for the quarantine. That’s what it took to get us together — us all quarantined in the house. It just goes to show [that] when we are sitting at home, the things we can come up with can be amazing.

You were open about experiencing coronavirus symptoms back in March. How are you feeling now?

I am feeling a lot better and quarantining at home, thank goodness. It drives me crazy though, to see how many people aren’t taking this [pandemic] seriously, because I understand the severity of this, and got through it, and I don’t wish this on anyone.

I tell people it’s like if a lion has been killing thousands of people in the streets and two to three months later, the government says it’s safe to go back outside. But did you catch the lion? Where is the lion? I’m terrified to go outside right now.

What advice do you have for people who might be feeling a little stir crazy or anxious right now?

I know this is a rough time but we need to all be in this together. Take your time, stay in the house; don’t go outside and try to find the lion. Practice social distancing, and if I can provide any level of entertainment for people to forget some of the stuff they’re going through, I’m gladly here to do it.

The “Break the Monotony Block Party” takes place this Saturday, from 12pm to midnight EST. DJ Jazzy Jeff will be hosting the stream from his Instagram Live account. The new merch collection will be made available exclusively on freshprincestore.com the same day.