The following article includes mention of sexual harassment and misconduct.

Only days after New York Attorney General Letitia James released the official findings of a months-long investigation confirming that Governor Andrew Cuomo had engaged in sexual misconduct and harassment against at least 11 women, it seems the career politician is finding fewer and fewer options that don’t directly lead to impeachment. As Mother Jones quoted in their own breakdown of the matter, James’ report listed the litany of offenses Cuomo had purportedly committed during his years in office, which included “sexually [harassing] a number of current and former New York State employees,” “engaging in unwelcome and nonconsensual touching,” and “making numerous offensive comments of a suggestive and sexual nature.” In addition to this, the Daily Beast noted that the state’s General Assembly gave Cuomo eight days to come up with any “additional evidence” to argue against a possible impeachment on August 6, three days after James’ results were made public.

While only time will tell whether or not Cuomo, who has served as New York’s governor for three terms, will be booted out of office (and, as Politico pointed out, possibly permanently prohibit him from running for governor in the future), it seems at least one person has been taking full advantage of the situation to castigate Cuomo publicly: ex-President Donald Trump, the only commander-in-chief in U.S. history to be impeached (and acquitted) twice. So what has Trump said about Cuomo? Read on after the jump to find out.

Cuomo has been getting Trump comparisons 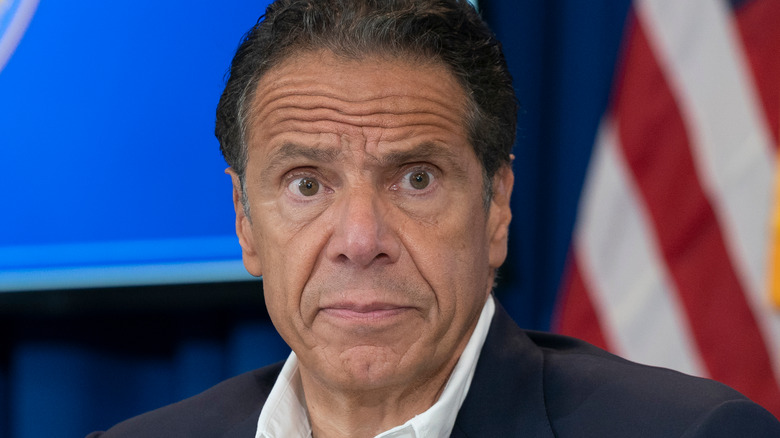 As the Daily Mail reported on August 6, Donald Trump took the opportunity at a conservative fundraiser held in New York the night before to go off on a tirade against Governor Andrew Cuomo, in which he appeared to gleefully slam the Democrat over the possibility of impeachment (and seemingly failed to recognize the irony of his comments as a twice-impeached president). “Cuomo’s got real problems,” remarked Trump, before uttering a number of chiding pull quotes. Among those included mentions of how “it’s going to be a hot couple of weeks in Albany,” the state’s capital where the impeachment trial will presumably take place, before mentioning how Senate Republican Minority Robert Ortt “is going to have a great time” at the proceedings.

Despite his commentary on August 5, Mother Jones reporter Nathalie Baptiste previously noted in an analysis of the similarities between both Trump and Cuomo, “aside from being powerful men from New York”: that Cuomo and Trump attempted to frame the allegations of sexual harassment against them as the product of “misinterpretation” (or, in the case of Trump, “lying”) by their accusers. Baptiste also pointed out how both men were responsible for disseminating misinformation about the coronavirus pandemic — Cuomo in lying about COVID-19-related nursing home deaths in order to maintain his popularity during the early phases of the pandemic, compared to Trump’s attempts to dismiss the seriousness of the pandemic outright and downplay the importance of masks from the beginning.

If you or someone you know has been the victim of sexual assault, you can call the National Sexual Assault Hotline at 1-800-656-HOPE (4673) or visit RAINN.org for additional resources.