She’s won over state officials, well-wishers, and children all over the world, but today, London’s dogs and cats were on the receiving end of the Duchess of Sussex’s charms.

Duchess Meghan was in the British capital’s Kensal Rise neighborhood for her first official visit to the Mayhew—an animal welfare center for which she is officially royal patron.

And while she met a number of hounds during the brief visit, it was one dog in particular that captured her heart—a Jack Russell named Minnie, who was recently brought into the center’s rehoming program.

As she spoke to staff about the Mayhew’s community outreach schemes, Meghan cradled the cute one-year-old (who loves belly rubs and cuddles), stroking her head and smiling. But though tempted to bring Minnie back to Kensington Palace to join her other two rescue pooches, the duchess lamented, “We can’t take another dog before the baby… our hands are too full!” 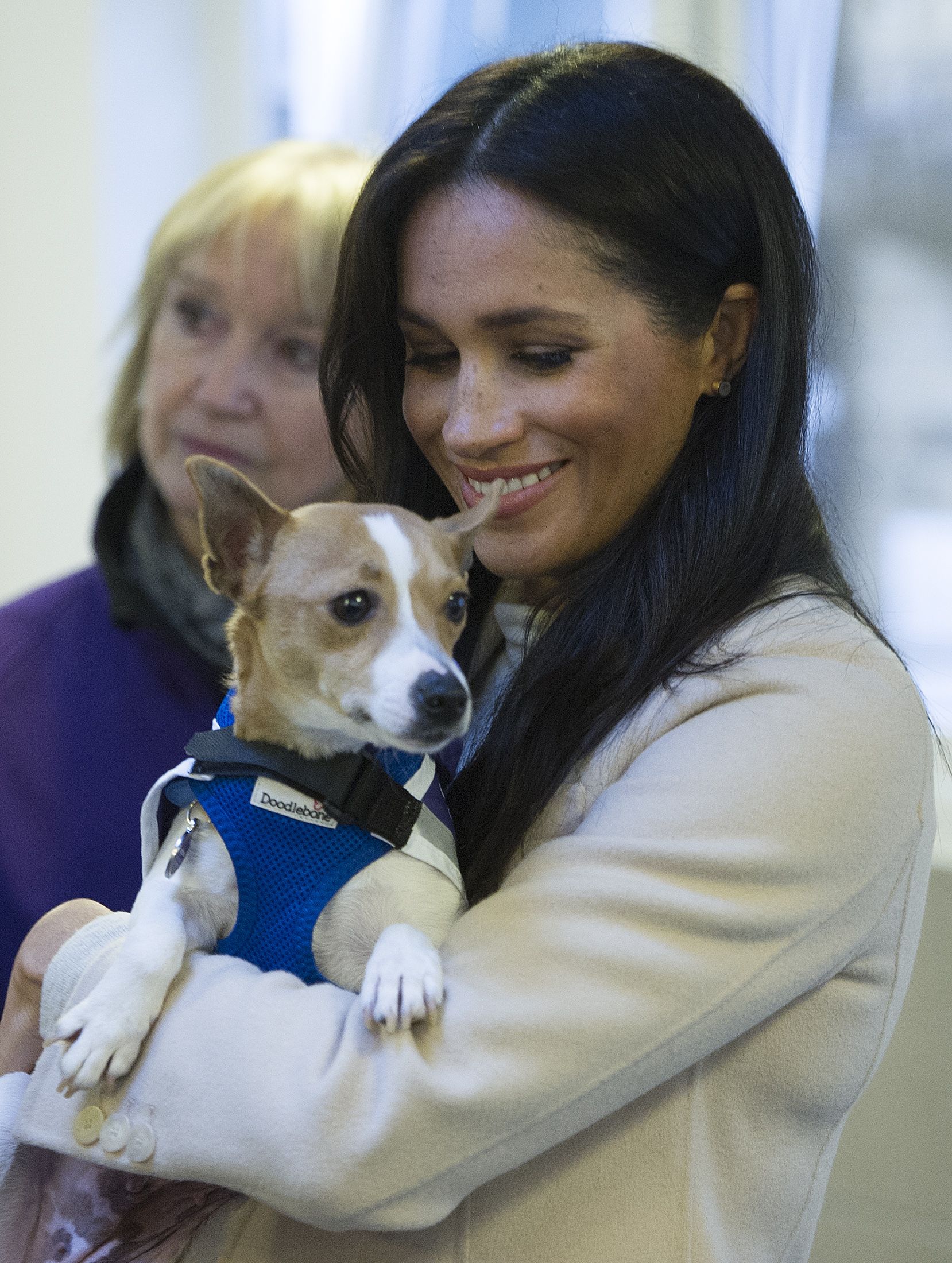 Though Meghan has privately visited the the Mayhew on two previous occasions, her January 16 engagement was an opportunity to meet those who have benefited from the charity’s community work, including care home residents with dementia who have received emotional support from “TheraPaws” dog Roobarb as part of their animal therapy initiative.

Peggy McEachrom told Meghan how the dog had improved her outlook on life through his visits to Lawnfield Care Home, where she currently lives. She also marveled at Meghan’s blossoming bump, jokingly calling her a “fat lady.” Meghan laughed, responding, “I’ll take that!”

In conversation with Wully Struthers, a formerly homeless Pet Refuge service user, Meghan learned more about how the charity supports vulnerable people trying to keep their pets during tough times. His two Staffordshire Bull Terriers, Azzy and Gallis, were cared for by the Mayhew’s animal welfare officers while he worked to change his living circumstances. “They’re like my babies,” Wully told the duchess. “That I understand! That I understand,” she responded, smiling.

Wednesday also offered a chance for the duchess to reunite with dogs she met on previous visits. Foxy, a four-year-old Pomeranian, had just come into care when she last visited, but is now getting ready to leave with a new owner. Cooed Meghan, “She’s so, so sweet.”

When meeting the dogs, Meghan spoke about her own experience of adopting. Guy, her beagle, was days away from being euthanized when she rescued him from Toronto’s A Dog’s Dream Rescue in 2015. And Bogart, a Labrador-shepherd mix who is too old to travel and currently lives in Canada with a close friend, was from a shelter in Los Angeles. Harry and Meghan also adopted a black Labrador last summer.

“He had been in a kill shelter before,” she said of Guy, who she walks without fail every day. “I remember getting this dog home and he was petrified of even coming to the front door.”

A longtime advocate of the “adopt, don’t shop” movement, Meghan’s support of the Mayhew animal charity was something of a no brainier when first learned about their impressive community work last fall. It took just one visit to their humble headquarters in northwest London for her to move forward with a patronage.

“She had read something about our community outreach work and that resonated with her and she got in touch,” CEO Caroline Yates tells BAZAAR.com. “[Animals] are a very important part of her life. She’s a natural.”

Despite being a small organization, 2018 saw the Mayhew handle 1,061 animal welfare cases, rehousing nearly 500 dogs and cats and vaccinating 32,431 dogs against rabies globally. Their international neutering programs in Afghanistan, Georgia, Russia, and India have neutered over 12,000 cats and dogs so far. Mayhew execs are hoping Meghan’s involvement will help them achieve even more this year.

Says Yates, “We’re not a massive charity at the moment but there are massive demands on our services and there is a massive need for our help in the community. Hopefully it will also help with fundraising… We’ve had a lot of interest [since the announcement] so the profile raising and the name is already getting out there.”

Despite entering her final trimester, Meghan is as active as ever. Following the engagement, she and Prince Harry attended the premiere of Cirque du Soleil’s TOTEM at London’s Royal Albert Hall, raising money for Sentebale. And before the month is over, Meghan will attend engagements for two further patronages—the National Theatre and the Association of Commonwealth Universities.