Facebook on Wednesday said it would temporarily block political ads for one week following U.S. election day in November to safeguard against candidates claiming “premature victory.” The ad suspension will kick in when polls close on November 3, the company said.

The update to Facebook’s election policy, mentioned in an afternoon blog post, said it will also “add more specific information” that “counting is still in progress and no winner has been determined,” if President Donald Trump or Democratic candidate Joe Biden’s pages were to claim an early win. Facebook added that it will direct users to its “voter information center” for up-to-date info on election results.

“If the candidate that is declared the winner by major media outlets is contested by another candidate or party, we will show the name of the declared winning candidate with notifications at the top of Facebook and Instagram, as well as label posts from presidential candidates, with the declared winner’s name and a link to the Voting Information Center,” Facebook VP Guy Rosen said in the blog post.

Instagram users will receive similar election updates on the app. Here’s a look at what users will see as votes are coming in: 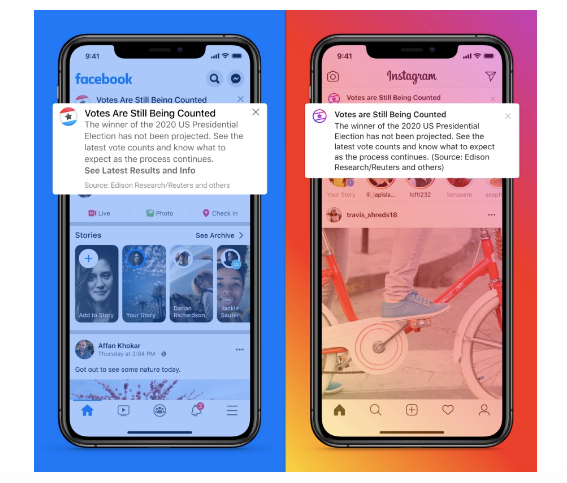 Previously, Facebook’s detractors — Sen. Elizabeth Warren (D-Mass.) being perhaps the most prominent among them — have ripped the company for not doing enough to weed out lies in political ads. In response, Facebook CEO Mark Zuckerberg has said on several occasions he thinks users are better off deciding what is and isn’t true for themselves, rather than having the tech giant do it for them.

During a speech last year at Georgetown University, Zuckerberg said he believed “in a democracy it’s really important that people can see for themselves what politicians are saying, so they can make their own judgments,” before adding he’s doesn’t think “a private company should be censoring politicians or news.”