Bush, the son of Trump rival Jeb Bush, didn’t mention any of the politicians in his storied family — and critics pounced 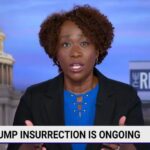 On MSNBC Thursday night, Chris Hayes had a slightly edgier take, musing, “Do you remember how Donald Trump destroyed your father in the 2016 election? ‘Low-energy Jeb?’ So the campaign is, ‘Hi. I’m George P. Bush. My father absolutely sucks. Please vote for me.’”

Bush’s campaign is also distributing beer koozies that feature a quote from Trump himself: “This is the only Bush that likes me! This is the Bush that got it right. I like him.”

Republican strategist Tara Setmayer called the koozies “utterly pathetic” while Pod Save America host Dan Pfeiffer mused, “George P. Bush choosing Trump over his own family in Texas says everything about where the GOP is right now.”

A column in conservative outlet The Bulwark said Bush is a “dynastic legacy case who’s so ambitious that he’s selling out his own family. And not even selling them out for a good cause — he’s doing it to suck up to an aspiring authoritarian strongman.”

MSNBC’s Lawrence O’Donnell tweeted, “What does a father have to do to deserve a son like George P. Bush?”

It went on like that and is likely to continue going on like that considering the election is months away. For now, watch Hayes’ Thursday night segment above and Bush’s campaign video below.