Jussie Smollett appeared publicly for the first time after being reportedly attacked in Chicago earlier this week. 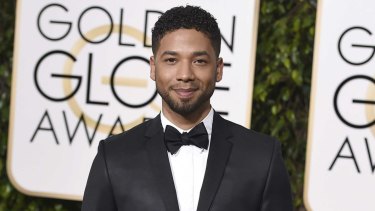 Actor Jussie Smollett told police he was the victim of a brutal homophobic and racist attack.Credit:AP

The actor appeared despite his family reportedly cautioning him against performing.

"If I'm honest, as his big brother, I wanted Jussie to sit this one out," Joel Smollett Jr. told People. "I sincerely wanted him to stay out of the public until he heals. Then, after much debate, some arguing and many tears, my family and I realised that tonight is an important part of Jussie's healing."

But Smollett said he "had to be here tonight," adding that he couldn't let his attackers win. "I will always stand for love, I will never stand for anything other than that. Regardless of what anyone else says, I will only stand for love. I hope that you all stand with me."

"Love is too short not to love who you want to love, and life is too long to not love who you love," he later added.

He played several emotional songs in the course of the night, including Heavy, which includes the lyrics "Strong back, strong shoulders / Cause I'm holding up a lot… I refuse to let my people down. I'm the boss, I'm the leader."

Throughout the night, the actor offered a message of love in the face of pain.

"In times of trauma or hurt or grief, we still have a responsibility to lead with love," Smollett said at one point. "If we don't, then we just die inside, and we've got to… live, ya'll."

He later added: "The hateful rhetoric has to stop and it stops when you believe in love. People who celebrate love get wrapped up in so much hate. We cannot let that happen. We are destined to fail to even exist. Take love back. We have to take it back because it was ours to begin with. Hurt people hurt people, they don't know why."

After finishing his set, the crowd roared until he returned to play a song titled Powerful. During the encore, he also clarified reports about the attacks – which varied wildly as the news broke Wednesday morning.

"Just because there has been a lot of stuff that has been said about me that is absolutely not true," Smollett told the crowd. "There are just a couple of points that I wanted to make really quick… I was bruised, but my ribs were not cracked. I went to the doctor immediately – I was not hospitalised. Both my doctors in L.A. and Chicago cleared me to perform but said to take it easy, obviously. And, above all, I fought the f— back. I'm the gay Tupac."

Smollett first spoke out about the attack on Friday in a statement to Essence magazine, and his comments Saturday echoed that message.

"Let me start by saying that I'm OK," Smollett told Essence. "My body is strong but my soul is stronger. More importantly I want to say thank you. The outpouring of love and support from my village has meant more than I will ever be able to truly put into words. "

"As my family stated, these types of cowardly attacks are happening to my sisters, brothers and non-gender conforming siblings daily. I am not and should not be looked upon as an isolated incident. We will talk soon and I will address all details of this horrific incident, but I need a moment to process," he continued.

"Most importantly, during times of trauma, grief and pain, there is still a responsibility to lead with love. It's all I know. And that can't be kicked out of me."