Prince Charles will be taking the throne as the king of England one day, as he’s the eldest son of Queen Elizabeth II and the late Prince Philip. As the heir to the British throne, the Prince of Wales will have a lot of decisions to make. Though Charles has yet to succeed his parents, it appears he’s already thinking about who he’s going to give the “Duke of Edinburgh” title to.

The U.K. native was expected to pass down the title to his younger brother Prince Edward, but according to a new report from The Sunday Times, that might not be the case. Charles currently holds the title as it was immediately reverted to him following Philip’s death in April 2021. However, the appellation will merge with the crown upon Charles’ future accession, meaning the title can either be regranted to another member or he can leave it in abeyance.

Aside from the Duke of Edinburgh title, many royal admirers are wondering if Charles will acknowledge Prince Harry and Meghan Markle’s kids, Archie and Lilibet, as members of the monarchy. People reported in June that he most likely won’t “make the unpopular and hostile move of removing the royal status of his grandchildren.” While it’s unclear exactly how Charles will handle the situations, if one thing is for sure: It definitely can’t be easy being the head of a big family. To find out why Charles is reportedly refusing to give Edward the Duke of Edinburgh title, keep scrolling. 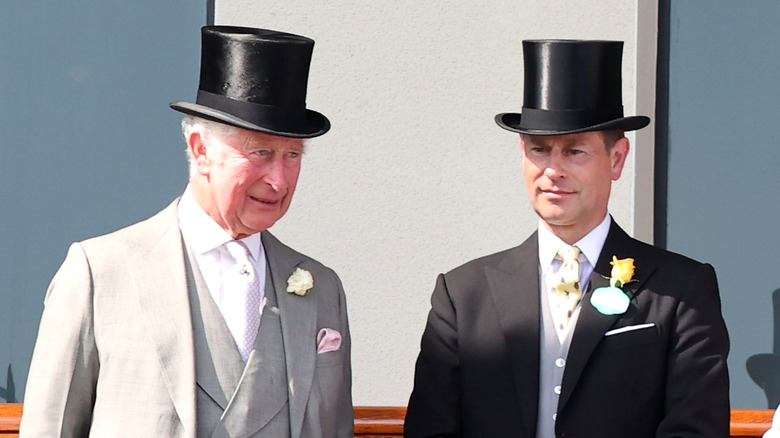 Prince Charles will be deciding on who receives the title of Duke of Edinburgh when he becomes the eventual king of England, and even though the status was supposed to be granted to Prince Edward, The Sunday Times reported that might not be the actual outcome. According to a source, “the prince is the Duke of Edinburgh as it stands, and it is up to him what happens to the title. It will not go to Edward.”

The U.K. publication reported the news on July 11, revealing Charles’ younger brother won’t become the Duke of Edinburgh “as far as [Charles] is concerned,” another insider said. The news comes as a shock for longtime royal admirers, as Edward was said to be the one to inherit it more than two decades ago. Per the Daily Mail, Buckingham Palace announced in 1999 that he would succeed his father’s dukedom “in due course.”

However, Edward was given the title of Earl of Wessex by Queen Elizabeth II following his June 1999 wedding that same year. While he was slated to become the Duke of Edinburgh with his parents’ blessings, “Edinburgh won’t go to [the Wessexes]” if Charles has his way, the second source told The Sunday Times. Because the title will merge when Charles becomes king, he’ll either temporarily suspend the title of Duke of Edinburgh or grant it to another family member.