For the better part of Donald Trump’s presidency, former New York City Mayor Rudy Giuliani was considered, if not his right-hand man, then one of his most devoted disciples. Giuliani, who had his law license revoked in June for making false statements about the November 2020 election results in an effort to have them overturned, was one of the major forces behind supporting Trump’s evidence-less claims that his defeat in the race was a result of fraud. Now, however, it seems that an ever-widening rift has formed between both Trump and Giuliani, one that, according to at least one author, might be difficult to ever repair (via Business Insider).

So what exactly caused the break between Giuliani’s devotion to Trump? And how has it affected Giuliani in other areas of his life, including the multi-billion dollar lawsuits that have been brought against him over the course of 2021? And lastly, is it possible that this underlying issue can ever be resolved? Keep scrolling to find out more. 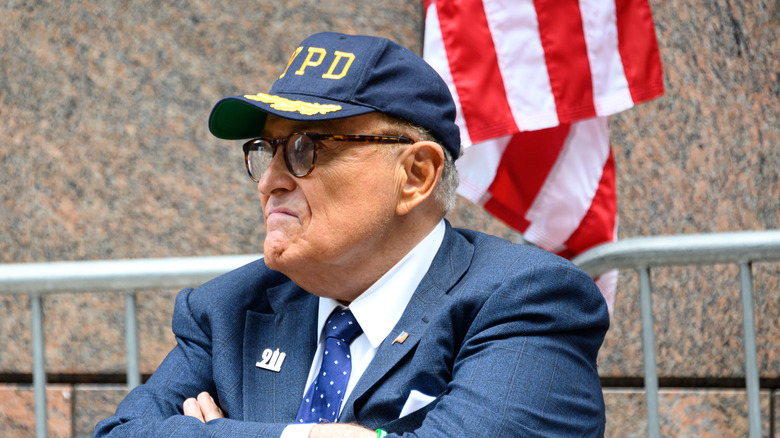 As Business Insider reported on July 5, author Michael Wolff wrote in his upcoming book, “Landslide: The Final Days of the Trump Presidency,” that the purported feud between disgraced former attorney Rudy Giuliani and ex-President Donald Trump stems from a disagreement concerning payment — one which Giuliani feels he is owed. According to Wolff (per the Times of London), “Trump is annoyed that [Giuliani] tried to get paid for his election challenge work,” in reference to Trump’s repeated, unsubstantiated claims that the November 2020 election was fraudulent, as well as current President Joe Biden’s subsequent victory.

Per Insider, Giuliani allegedly charged Trump at a rate of $20,000 per day in order to help aid the twice-impeached president in finding evidence of election fraud or tampering — evidence that, in the end, didn’t actually exist. Considering Giuliani attempted to contest the election results for a number of weeks, if not months, the sum total Giuliani feels he is owed, if not on the public record, is still somewhat easy to speculate as a sizable chunk of change. According to Insider, the dispute over payment led to Giuliani being “cut off” from access to Trump, as well as “cast off” by unnamed members of the Trump family. It’s also possible that Giuliani’s fixation on his supposed lost income could in part be fueled by two lawsuits brought against him — lawsuits worth billions of dollars.