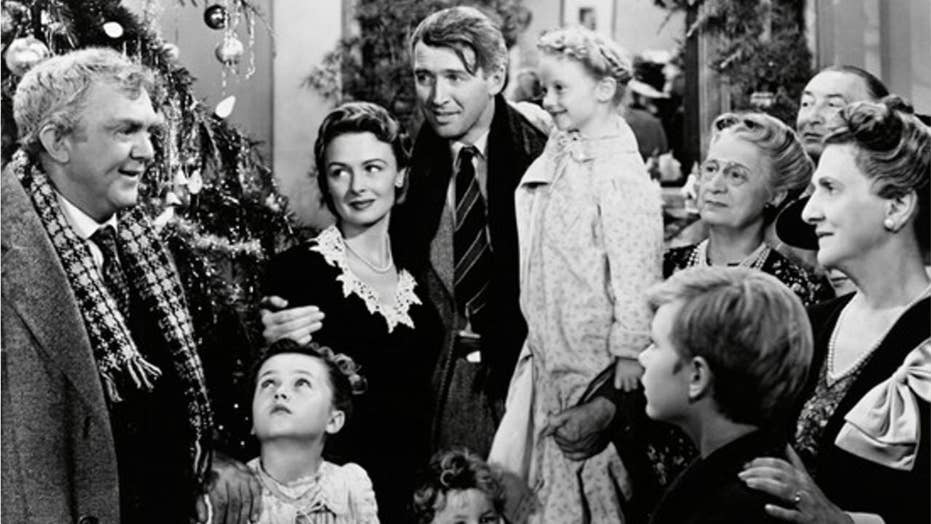 Frank Capra’s Christmas classic, ‘It’s a Wonderful Life,’ starring James Stewart is one of the most iconic films ever made. Author Jeremy Arnold shares some fun movie secrets you may not have known.

There are plenty of reasons why “It’s a Wonderful Life,” which first premiered in 1946, is still considered to be one of the most popular Christmas films of all time.

The beloved drama, directed by Frank Capra, tells the story of an angel named Clarence (Henry Travers) who is sent from heaven to help George Bailey (James Stewart), a desperately frustrated businessman on the verge of suicide. Clarence then shows George what life would really have been like if he had never existed.

The black-and-white classic has become a staple during the holiday season and is still recognized as one of Stewart’s most iconic films.

Jeremy Arnold, a film historian who recently published “Christmas in the Movies: 30 Classics to Celebrate the Season,” in partnership with Turner Classic Movies, said “It’s a Wonderful Life” is one of his personal favorites. And it’s a film longtime fans can still learn plenty from.

’Tis the season to tune in once more. And in time for the festivities, Arnold shared his favorite fun facts about “It’s a Wonderful Life”:

“It’s a Wonderful Life” had a different title.

“A writer named Philip Van Doren Stern came up with the idea of what became ‘It’s a Wonderful Life’ in 1938,” explained Arnold. “He said in an interview that he got the idea while he was shaving. He turned it into a two-page outline, but he could never really flesh it out. Five years later, he thought to add a Christmas setting to the story. He called it ‘The Greatest Gift.’ Then he [turned] it into a short story in 1943. He couldn’t sell it to anyone, so he printed up a few dozen copies himself as a little pamphlet, and he sent it out as his Christmas card that year.”

A lucky agent earned big bucks for his discovery.

“One of those cards with this story found its way to an agent who wound up selling it to RKO for I believe $10,000. RKO tried to turn it into a screenplay and they went through several writers, but no one could really do it. They gave it up and they sold it to Frank Capra.”

Frank Capra was inspired by the film’s darkness.

“Frank Capra had been making World War II training documentaries, which are very famous,” said Arnold. “He was looking now, after World War II, to get back into making Hollywood features. ‘It’s a Wonderful Life’ was a story that came to him and he liked it. He felt something had changed in American society because of World War II.

“The darkness of the story was something he thought was appropriate and interested him to explore. His experience witnessing a lot of the horrors of the war had transformed him, too. Ironically, we remember the film for its lightness and joy, but it was this darkness that attracted Capra to it.”

James Stewart was craving a challenge.

“This is a very important film in James Stewart’s career because it was a stepping stone into a phase of his career where he played much darker and more obsessed characters,” said Arnold. “He made a series of Western shorts for Anthony Mann a few years later, where he’s practically psychotic. He starred in ‘Vertigo’ where he is extremely disturbed psychologically. ‘It’s a Wonderful Life’ is probably the film where he explores that side of his character to such a degree.” 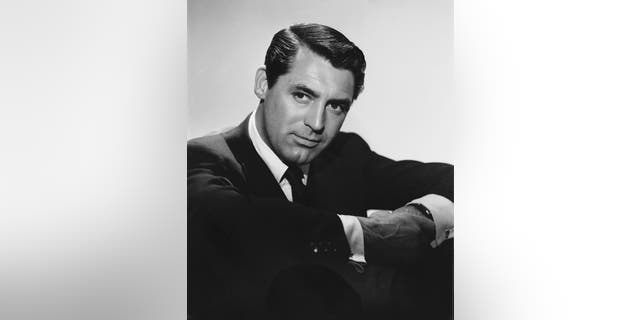 Cary Grant was originally considered for the role of George Bailey.

While the studio was set on having dashing English actor Cary Grant take on the role of George Bailey, it was Stewart whom Capra wanted for his film. “I think the reason Capra thought of him was that when they made ‘Mr. Smith Goes to Washington,’ that movie also has glimmers of this personality we see in George Bailey. There are some scenes in that movie where James Stewart goes kind of crazy. It’s a little messily unhinged, not to the degree here or in ‘Vertigo,’ but there was a hint of it there and Capra noticed it.

A new snow was born.

Before “It’s a Wonderful Life,” snow in movies were usually created with cornflakes painted white. However, the sound they created when actors stepped on them was so loud that it often disrupted filming. This resulted in scenes frequently being re-shot and re-dubbing dialogue. However, Russell Shearman, who led the special effects team for “It’s a Wonderful Life,” had an idea. “They created a new way of doing snow, which combined water, sulfite, flakes of soap and I believe sugar,” said Arnold. “They found a way to create realistic-looking snow that did not crunch when you stepped on it.

“That was a big deal at the time. The snow is really beautiful in ‘It’s a Wonderful Life’ and there’s a lot of it. I think that’s one subtle reason we love the movie so much. Because elements like that really create a cozy feeling when you’re watching it, whether in a theater or with your family.”

The swimming pool scene was real.

“The swimming pool scene, where the floor of the high school gym opens up to reveal a swimming pool underneath and everyone falls in or jumps in?” said Arnold. “That was real. It’s still there at the Beverly Hills High School.”

Actress Donna Reed served as the leading lady opposite Stewart in “It’s a Wonderful Life” as Mary Hatch and the pair naturally delivered a believable, astonishing performance. “The audience has to believe and feel the love between her and Jimmy Stewart because that is really what ultimately saves him in a sense,” said Arnold. “The connection that they forge and the screen chemistry that they gave is remarkable and it’s easy to take for granted. If we didn’t feel the connection he has with Mary, played by Donna Reed, really the story wouldn’t work."

The film was shot during a heat wave.

“It’s a Wonderful Life” may be an iconic Christmas movie, but it was actually shot during the midst of a heat wave in the summer of 1946. It was so steamy at times Capra was forced to shut filming down for a day. In key moments of the film, you can see Stewart breaking a sweat when it’s supposed to be snowing and chilly. 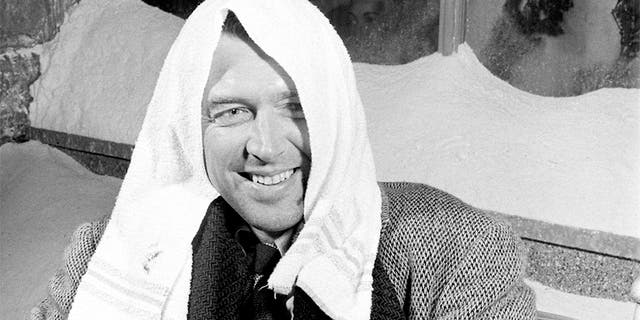 Actor Jimmy Stewart smiling during a break in filming on the set of the movie "It’s A Wonderful Life." — Getty

“The wonderful actress, Beulah Bondi, who plays Jimmy Stewart’s mother — she had played his mother before on screen,” said Arnold. “She would do so five times throughout their careers. The last time was in 1971, in an episode of ‘The Jimmy Stewart Show’ on TV.”

The movie’s Bert and Ernie have no relation to “Sesame Street.”

Over the years, fans have pointed out the cop and cab driver in “It’s a Wonderful Life” are named Bert and Ernie, just like the stripe-wearing buds on the hit children’s television series. However, Arnold insisted the film characters did not inspire “Sesame Street” in any way. “That’s a rumor that has been dispelled by the makers of ‘Sesame Street’ many times,” said Arnold. “One of the Hensons clearly said no and it’s just a coincidence.”

When the film initially premiered in theaters, it wasn’t exactly a box office bomb, but it also didn’t do so great either. Arnold said there were several factors that explain why the movie wasn’t an instant success. “The advertising did not stress the Christmas element very much,” he said. “Instead, it portrayed the film more as a purely warm romance… almost a screwball comedy. But the film isn’t really that, and it’s possible audiences were turned off by its bleaker side.”

Arnold added that during the time of the film’s release there was also terrible weather impacting the eastern U.S. with bitter cold and ice. Consequently, box office numbers were down across the board. Also, reviews may have played a role. “The reviews were not ‘bad,’ as it’s sometimes reported,” said Arnold. “They were positive, but not effusive.”

“It’s a Wonderful Life” was rediscovered in the 1970s.

The film may be a sought-after favorite now, but it was seemingly forgotten after its release until it was rediscovered decades later. “The film fell into public domain in the early 1970s I believe due to a clerical error,” explained Arnold. “The copyright was not renewed, so that meant any TV station, if they could get their hands on a print, or a copy of it, they could show it as many times as they wanted without having to pay anyone.

“For about 20 years, every year in December, it was on about 50 times in any viewing area on many channels. Republic ultimately reacquired the rights to the short story and they renewed the rights to the music. All the multitudes of television airings stopped, and for quite a number of years now, the only place you can see it on TV every year is on NBC at Thanksgiving and Christmas. It’s never been on Turner Classic Movies, simply because they don’t have the rights to air it.”

Frank Capra and James Stewart were thrilled over the film’s reemergence.

“Capra and Stewart considered this film among their finest work, so they were very, very proud of it,” said Arnold. “Jimmy Stewart often told the story of accepting the role after Capra pitched it to him simply because it was a chance to work with Frank Capra again, whom he had done a few films with before World War II.

“Stewart said Capra described the film as about an angel who comes to Earth, and he doesn’t have his wings and he helps prevent someone from taking his own life, and then the man goes off with the angel to see what his life would have been like. The way he was describing it, it sounded absolutely terrible, bizarre and ridiculous. But Stewart said ‘I’m in,’ because it was Capra who was proposing it. And the rest is history."