James Martin, 47, was less than impressed when an ITV producer interrupted him while he was decorating his towering dessert topped with layers of meringue and summer fruits. The Saturday Morning host was adding the finishing touches to his delectable dish with his guests Jane Seymour, 68, and Nick Nairn, 60, when he suddenly addressed the producer’s comments. The chef exclaimed: “Now I’ve been told in my ear, ‘How do we eat it?’ “I don’t care either, it’s not my problem. I’m just here to cook it, that’s it.”

Now if this person in my ear wouldn’t stop whinging, I would keep going.

In an attempt to resolve the issue, James explained: “They have this thing in America, you know the ice box cakes they do with biscuits and cream.

“And you leave it in the fridge for two or three days. I don’t think this would manage probably getting out of this door with this crew to be honest with you, they’ll find a way.”

The star then proceeded to cover the dessert with berry flavoured sauce.

The team completed the show-stopping sweet treat by adding fresh strawberries on the top.

However, James became distracted again by a crew member “whinging” in his ear.

Speaking out about the disturbance while adding extra sauce to his dish, the ITV favourite said: “Now if this person in my ear wouldn’t stop whinging, I would keep going.” 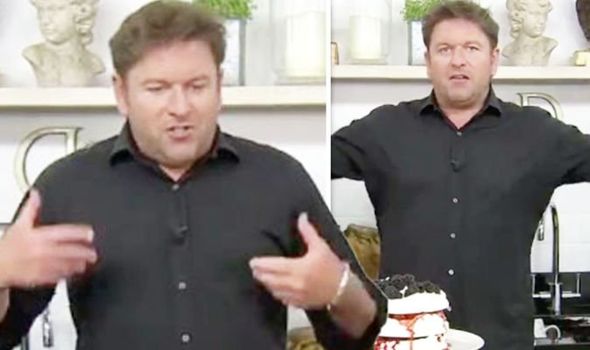 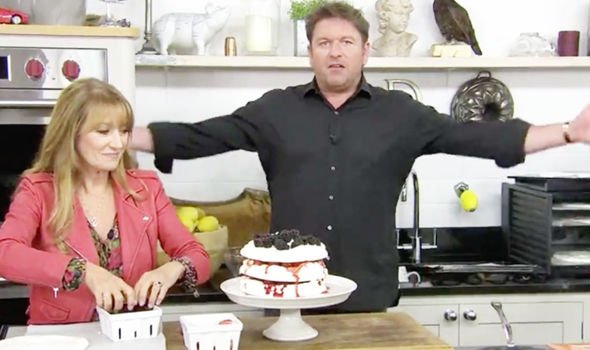 Elsewhere, James Martin gave a warning to Saturday Morning viewers last weekend when he made a calorific cheesecake.

The presenter began preparing the decadent treat on the programme and explained: “So this is really simple, we’ve got cream cheese…”

He then paused as he jokingly insisted fans of low fat cooking would not want to hear further details about the recipe.

James admitted: “If you’re into low fat cooking you might as well switch over.

“Because this is gonna depress ya, because it’s gonna get worse! 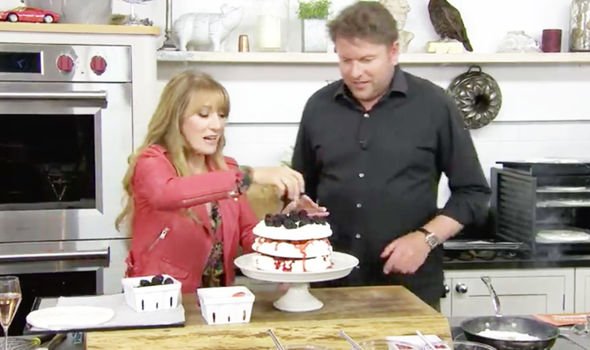 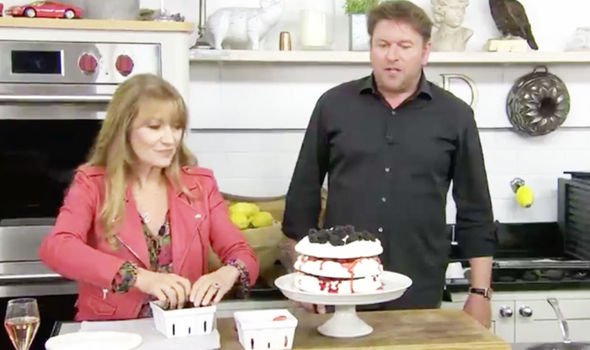 “You cannot make this out of low-fat anything.”

Later in the show, James made an inventive chicken dish stuffed with beer cans to give a unique flavour.

As James walked over to the BBQ to proudly unveil the finished result, he said: “Here’s the money shot…”

“Don’t mess this up lads! Particularly him on the camera over there.”

James Martin’s Saturday Morning airs today on ITV from 9.25am.