The hits just keep on coming. Jenelle Evans capped off her roller coaster of a week — in the hospital!

“Hopefully we will get some answers for my health now,” the Teen Mom 2 star, 27, captioned a photo of herself wearing a yellow hospital bracelet on her left wrist on Friday, December 21. 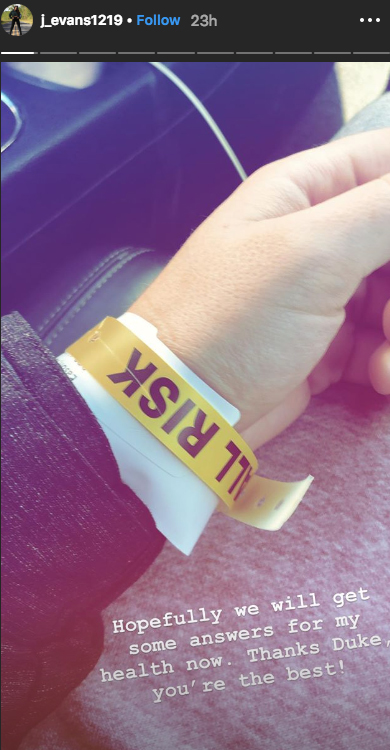 Hours later, the MTV personality posted a followup photo of herself on a stretcher wearing a hospital gown and red cap. “Had biopsies done everywhere today,” she wrote followed by the hashtag #wishmeluck. 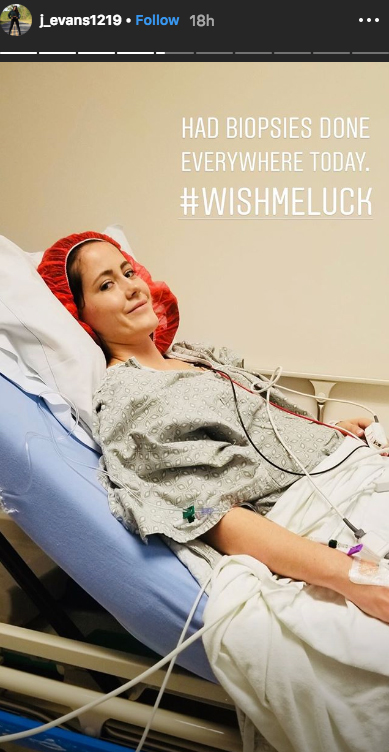 Evans’ husband, David Eason, had his own issues to deal with that same day. A man named Terry Hill decided to press charges against the former reality TV star, 30, after he shared a video — taken by Evans — that showed him illegally towing a white truck, which belongs to Hill. “I went home last night, and I was talking with my wife, and she says, ‘Somebody has to stop this guy,’ and the viewers that we talked to on her computer, they said, ‘Y’all need to press charges,’ and so I decided I would,” Hill, 73, said in an interview with Wilmington, North Carolina, station WECT. “I’m going to try to do my best to be a law-abiding citizen, and he needs to do the same thing. From the reports I looked at and the videos I’ve seen, somebody has got to stop him. He’s going to cause a lot of trouble.”

Wilmington Police confirmed Hill’s decision via tweet on Friday: “UPDATE: Hill has decided to press charges. An officer is meeting with him to assist in paperwork/taking a report. Once completed, WPD will take appropriate action to charge Eason.”

“Learn the right way to deal will [sic] a$$holes who think it’s cool to block you in a parking space,” Eason wrote in the description of the video in question on YouTube on Wednesday, December 19. “Good thing my trailer has a folded tongue that allowed me to get my truck out so I can tow him out of the way, in order to move my boat.”

Evans and Eason’s videos frequently cause controversy. On Friday, the Read Between the Lines: From the Diary of a Teenage Mom author posted a video on Instagram that showed her pouring gasoline onto fellow MTV star Kailyn Lowry‘s Pothead Haircare products, which Evans said Lowry sent as a gift. “Hey, Kail. This is to your peace offering,” she quipped before lighting the present on fire.

“Been debating whether to upload this, but I feel like the time is appropriate. Kail Lowry , for years you’ve been super jealous and envious of all us girls on the show,” Evans captioned the post. “You try to make your way into the group, then turn into a mean ass person when it came down to me.”

Costar Briana DeJesus, who previously dated Lowry’s ex-husband, Javi Marroquin, sided with Evans in the feud, telling In Touch, “To Jenelle, I say kudos and let the motherf–ker burn.”