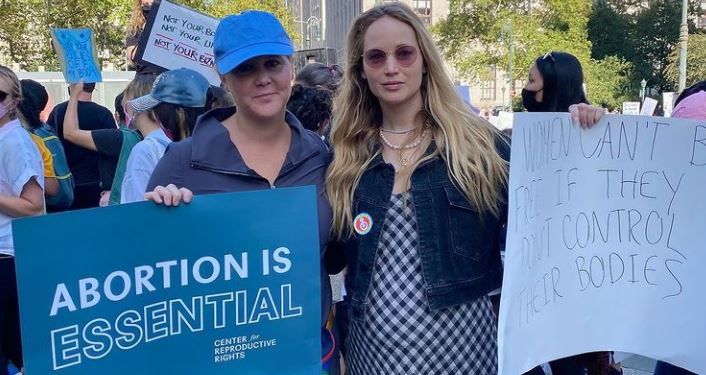 Jennifer Lawrence and Amy Schumer joined forces to protest against the controversial abortion law this weekend.

The Hollywood stars joined campaigners at the Rally For Abortion Justice in Washington DC on Saturday, to make their voices heard about women’s rights to reproduce.

It comes after Texas recently passed a law that bans women from having abortions once they are past the six-week mark in pregnancy.

Trainwreck actress Amy shared a photo of her and Hunger Games star Jennifer posing in the middle of the crowds, and holding up signs.

Jennifer’s banner read: ‘Women can’t be free if they don’t control their bodies,’ while Amy’s said: ‘Abortion is essential.’

In the caption, Amy wrote: ‘I don’t have a uterus and she is pregnant but we out here @womensmarch @plannedparenthood #rallyforabortionjustice 🙌🏼🙌🏼🙌🏼.’

Jennifer, 31, is currently expecting her first child with husband Cooke Maroney, while Amy, 40, recently underwent surgery for endometriosis which removed her uterus.

Comedian Chelsea Handler joked: ‘I have your uterus.’

Actress Ali Wentworth chimed in: ‘March for my ovaries!’

Rosanna previously released a statement about the event to Variety, and said: ‘Enough is enough. It’s time to kick this whole movement into another gear.

‘We deserve sovereignty over our own bodies. To have come this far and to go backwards in 2021 is insanity. We will not allow it.’

Texas’ so-called Heartbeat Act is one of the most restrictive American laws and is also imposed in the states of Georgia, Mississippi, Kentucky and Ohio. It has received severe backlash from the people of Texas, along with being condemned by US President Joe Biden, who described it as ‘extreme’.