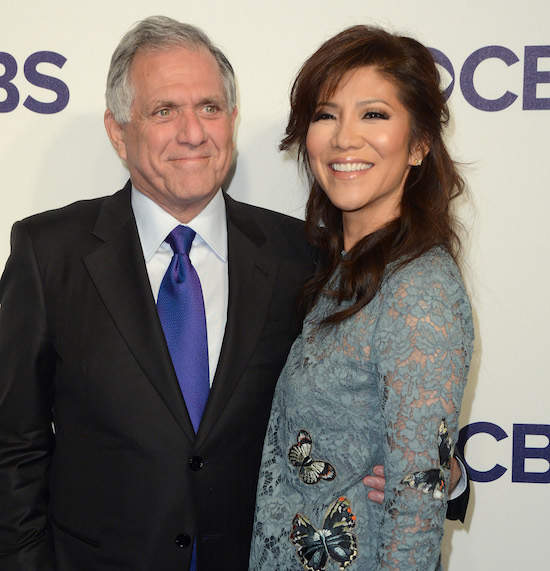 Get ready for a lot more “and I’m Julie Chen Moonves” from Julie Chen on future seasons of Big Brother because it sounds like she won’t be giving a divorce lawyer a boatload of cash. Her husband, Les Moonves, is sitting around waiting to figure out if CBS is going to fork over $120 million in a severance package to him after her was booted from the network in light of all sorts of horrific #metoo allegations. The Chenbot left her perch on The Talk (and is being replaced by Carrie Ann Inaba) in order to be with her family/not take questions from Sharon Osbourne about what it’s like to sleep in bed next to a monster. Well, a whole new round of tawdry tales about Les came out this week, but Julie ain’t going anywhere.

Page Six says Julie and Les are “closer than ever” despite continued reports of him being a real asshole to female employees and potential actresses at CBS. Julie is said to have believed Les that people were out to get him, but the latest accusation – that he kept an employee around for oral sex – has definitely made her twitch a bit. A Julie spokesperson said otherwise.

“Julie remains committed to her marriage and is focused on her family.In fact, this has drawn Julie and her husband as well as their entire family closer than ever. As for recent media reports, they are based on leaks that can’t be responded to.”

Les reportedly got Julie to believe everyone is just out to get him, so she stood by her man. All his bad behavior is said to have happened before Julie came along, so at least she and Catherine Zeta Jones have something to bond over at the next “I married a perv” luncheon at the Beverly Hills Hotel. Another source backed up the part about it all happening before Les and Julie got married, but that person wondered how Julie could still stay with him. I have a good idea why.

Les is worth roughly $700 million, and he could get a $120 million payout from CBS for booting his ass to the curb. Of course, CBS may not have to do that if they find out he violated the terms of his employment agreement. Somehow, I think if/when CBS doesn’t pay Les his lump sum, the producers at The Talk are suddenly going to get calls from Julie that go, “Hey, uhhhh, can I take back that whole thing I said about Carrie Ann Inaba replacing me?”