Chicago: A Cook County grand jury has indicted "Empire" actor Jussie Smollett on 16 counts of disorderly conduct for allegedly lying to police about being the victim of a racist and homophobic attack.

The multiple counts highlight different aspects of Smollett's allegedly phony story, including claims that his attackers beat him, poured a chemical substance on him and put a rope around his neck. 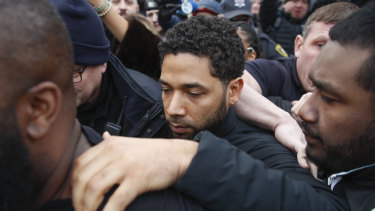 The indictment comes a little more than two weeks after prosecutors charged Smollett with a single felony count and he was released from Cook County Jail after a friend posted his $US100,000 ($141,000) bond.

Smollett is scheduled to appear in the court on Thursday so a judge can be assigned to preside over his case and he can plead not guilty to the 16 counts.

The actor, 36, is accused of staging a phony attack on himself, then telling police he was the victim of a hate crime.

Smollett, who is African-American and openly gay, has said he was walking from a Subway sandwich shop to his apartment in downtown Chicago around 2am on January 29 when two men walked up, yelled racial and homophobic slurs, hit him and wrapped a noose around his neck.

Police initially treated the incident as a hate crime, but their focus turned to Smollett after two brothers who were alleged to have been his attackers told police that Smollett had paid them $3500 to stage the attack, with a promise of another $500 later.

Police pieced together much of their evidence by reviewing footage from about 55 police and private surveillance cameras showing the brothers' movements before and after the attack.

The shift in the investigation came amid often bitter public debate and stinging scepticism on social media – doubts that Smollett addressed in a national TV interview and in a strongly worded statement after the brothers were released from custody after questioning by police. 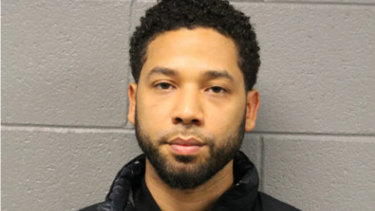 A week before the alleged attack, Smollett told police he received a threatening letter at work. Witnesses told police a postal worker dropped off the letter at the Chicago studio where "Empire" is filmed. It was postmarked in Bedford Park, a southwest Chicago suburb, on January 18 and bore two American flag stamps. The letters "MAGA" were handwritten in the upper left corner of the envelope.

Prosecutors said Smollett staged the attack because he was unhappy with the studio's response to the threatening letter. Chicago police took it a step further, accusing Smollett of faking the letter as well.

The letter is the subject of a separate federal investigation.