Royals — they’re just like us! Well, sort of. While Kate Middleton might mix her designer duds with “High Street” fashion that we can all emulate, there are aspects of the royals that differentiate them from regular citizens. One of those differences comes courtesy of their upper-class past-times.

Per the Mirror, the late Prince Philip enjoyed horse riding and carriage riding, and he passed down a love of both to his granddaughter, Lady Louise Windsor. Upon his death, the Duke of Edinburgh bequeathed his custom, dark green four-wheeled carriage to Louise, underscoring the special bond they’d shared. Zara Tindall is another avid horse rider, and she nabbed silver at the 2012 Summer Olympics, according to Hello Magazine. Likewise, Princess Anne was the first member of the British royal family to compete in the Olympics years earlier. Clearly, equestrian talents run deep in the Windsor bloodline!

The next generation of royals are already showing some serious promise when it comes to another one of the monarchy’s passions. Per People, Kate Middleton paid a visit to the RAF Brize Norton airbase on September 15 to thank team members who had aided in the evacuation of Afghan civilians. As she spoke with servicemen and women, the Duchess of Cambridge shared that her three children are displaying a budding interest in one of their dad and uncle’s top interests. Here’s what she said. 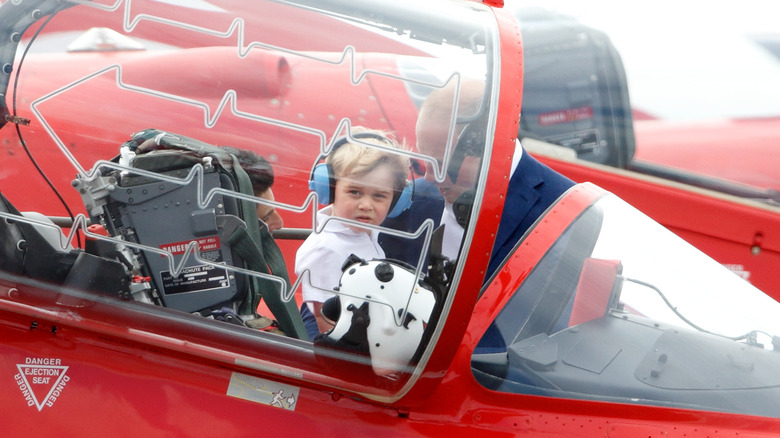 Kate Middleton’s visit to the airbase proved fruitful in more ways than one. That’s because “she did mention that her children are very interested in aircraft,” Loadmaster Sergeant Mark Curtis told People. But the fact that Prince George, Princess Charlotte, and Prince Louis are into aviation makes sense, given military service is a sacred royal tradition.

Kate and William have also been fostering a love for planes and helicopters by taking their kids to the Royal International Air Tattoo at RAF (Royal Air Force) as far back as 2016. And when the Cambridges made their way to Hamburg as part of a royal tour in 2017, Prince George could hardly contain his excitement when he spotted all the helicopters (just look at these cute photos!)

The adorable trio come by their passion for aviation naturally, as Prince William served as a search and rescue captain in the RAF. Their uncle, Prince Harry is a 10-year military veteran, who underwent two tours in Afghanistan, per Vanity Fair. In June, Harry issued a statement in honor of those killed in an attack in the war-torn country. “These workers put their lives on the line every day to make the world a safer place. This brutal act reminds us that we must stand in solidarity with humanitarian aid workers and the communities they serve,” he said. Something tells us Kate and William’s children might be more comfortable in the cockpit than on horseback.