Not only did Katherine Waterston attend the premiere for the next ‘Fantastic Beasts’ film, but she gave her first interview hinting at what Tina will be up to, after being mysteriously missing from the movie’s promos.

Call off the search, we have found Tina Goldstein! Fans of the Wizarding World are eagerly awaiting the premiere of the next big, magical epic from the Harry Potter spin-off franchise, Fantastic Beasts and The Secrets of Dumbledore. After years of waiting, many of their burning questions will be finally be answered. However, the biggest question plaguing those devoted to the films was answered on March 29th, when Katherine Waterston , who plays the aforementioned Tina in the movies, arrived on the red carpet premiere in London. 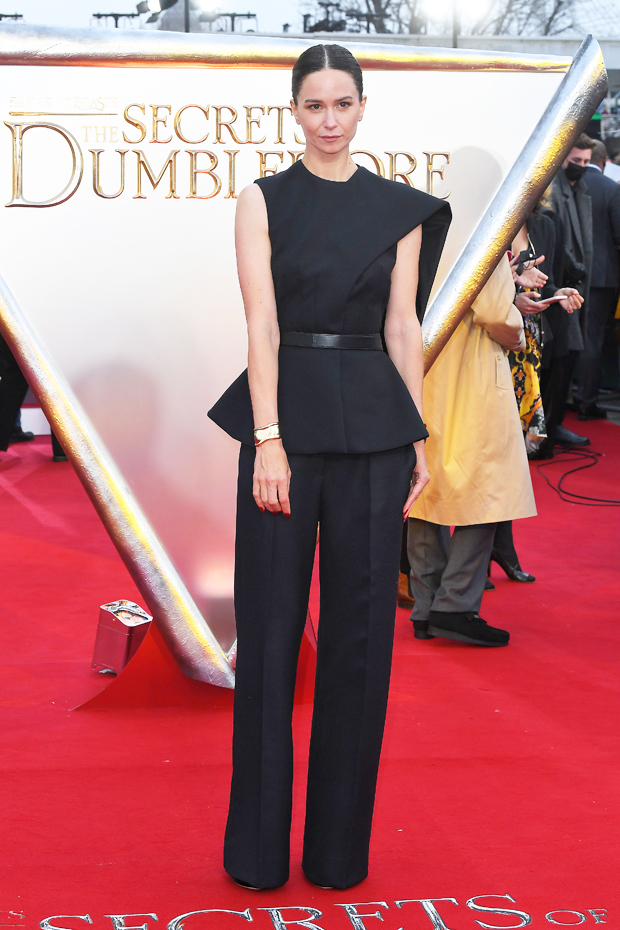 As the female lead of the previous two films, fans became concerned when Katherine was mysteriously absent from all of the film’s promotional materials; no character poster released, no mention of her in commercials, and with the exception of a blink-and-you’ll-miss it snippet in one of the international trailers, no scenes featuring Tina, the future wife of Eddie Redmayne‘s Newt, have been seen by anyone yet. So, what’s the deal?!

Well, we finally have some answers! During a brief interview on the red carpet premiere in London, Katherine confirmed that Tina will be in the next film and that it feels “great” to be back for another Fantastic Beasts. “It feels a long time coming,” she added. The interviewer then asked her straight up where Tina is in the film, hinting that they oldest Goldstein sister has perhaps gotten a “promotion” since the last film. But Katherine quickly sidestepped the question. “I’m not going to talk about it,” she teased. “You can’t get me to talk about it. We’re well-trained for the premieres.”

Refusing to give any hint at Tina’s role to play in the next film, Katherine did take a moment to recognize the “exciting” new cast members to the franchise, and talk up the people who really make the movies so special: the fans. “They are so supportive,” she said. “It’s really galvanizing because we are all trying to do our best for them. When we feel their support, it makes us feel that we can do it.”

Fantastic Beasts: The Secrets of Dumbledore is set to hit theaters on April 15th, but it comes in the middle of fresh scandal concerning the cast. Noticeably absent from the red carpet was Ezra Miller, who plays Credence Barebone/Aurelius Dumbledore, Dumbledore’s lost brother. Ezra was actually arrested in Hilo, Hawaii, and charged with disorderly conduct and harassment following an alleged incident inside a bar. But this is just the latest issue concerning the creatives involved with the 3rd film in the Fantastic Beasts franchise.

From the get go, the film made headlines, beginning with Johnny Depp being removed from the film due to his legal battle with ex Amber Heard. The role of Gellert Grindelwald has now been taken over by Mads Mikkelsen. Following that announcement, creator of the Wizarding World and Harry Potter franchise, J.K. Rowling, made what are being considered by most as transphobic comments, which she tried to justify with a nearly 4,000-word blog post that was not well received.

Like many stars in the Wizarding World films, Katherine made her position clear in support of trans rights immediately after Rowling’s comments. “Because I was associated with Fantastic Beasts, it felt important to communicate my position,” she explained in an interview with the Independent. “One wondered if they might be grouped in with other people’s views by association.”