To get revenge on Tristan Thompson for his alleged misdeeds, Khloe Kardashian is reportedly hitting him where it hurts the most: the fruit of his loins.

According to a RadarOnline source, the 34-year-old KUWTK star is “trying to prevent” her 27-year-old baby daddy from seeing their daughter True Thompson just weeks after he was allegedly caught cheating on her with Jordyn Woods.

The insiders revealed that KoKo “does not want Tristan anywhere near her or their baby,” adding:

“Khloe is trying to prevent Tristan from seeing True and it is really starting to p**s him off.”

It’s unclear when the Cleveland Cavaliers star last saw baby True, but they haven’t been photographed together since Thanksgiving.

Ch-ch-check out their last pic together (below): 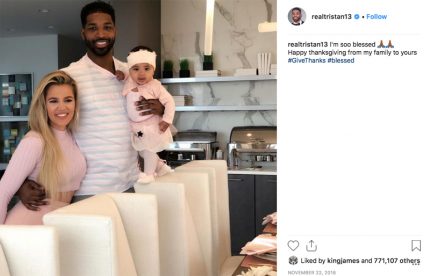 Unsurprisingly, not being able to see his daughter is really upsetting the father of two — who, according to the source, understands that he wronged Khloe by reportedly cheating on her, but feels like using their daughter to get back at him is crossing the line.

“He is her father and he is furious that she is trying to use True as a pawn in her game! Tristan understands what he did wrong but he just really feels like it is unfair of Khloe to try and put True in the middle.”

While Khloe initially blamed Kylie Jenner’s bestie for “breaking up” her family, she’s since redirected her anger and blame at the athlete.

But if this Kardashian wants to use their daughter as a pawn for revenge, Tristan is willing to play dirty, too — in court! The source added:

“Tristan will take Khloe to court if he has to and he knows that he will win if it gets to that point.”

What’s especially interesting here though is that it was first reported the 34-year-old momma of one wouldn’t keep the basketball star from the little one. At the time, a source confessed:

“She’s very good at compartmentalizing and at the end of the day, she wants True to have a happy relationship with both of her parents. She’s not one to seek revenge or hold onto negativity.”

So, either feelings have changed since she unfollowed her ex on Instagram OR Khloe is going back-and-forth on how she will raise True!

What do U believe?? Sound off in the comments (below)!