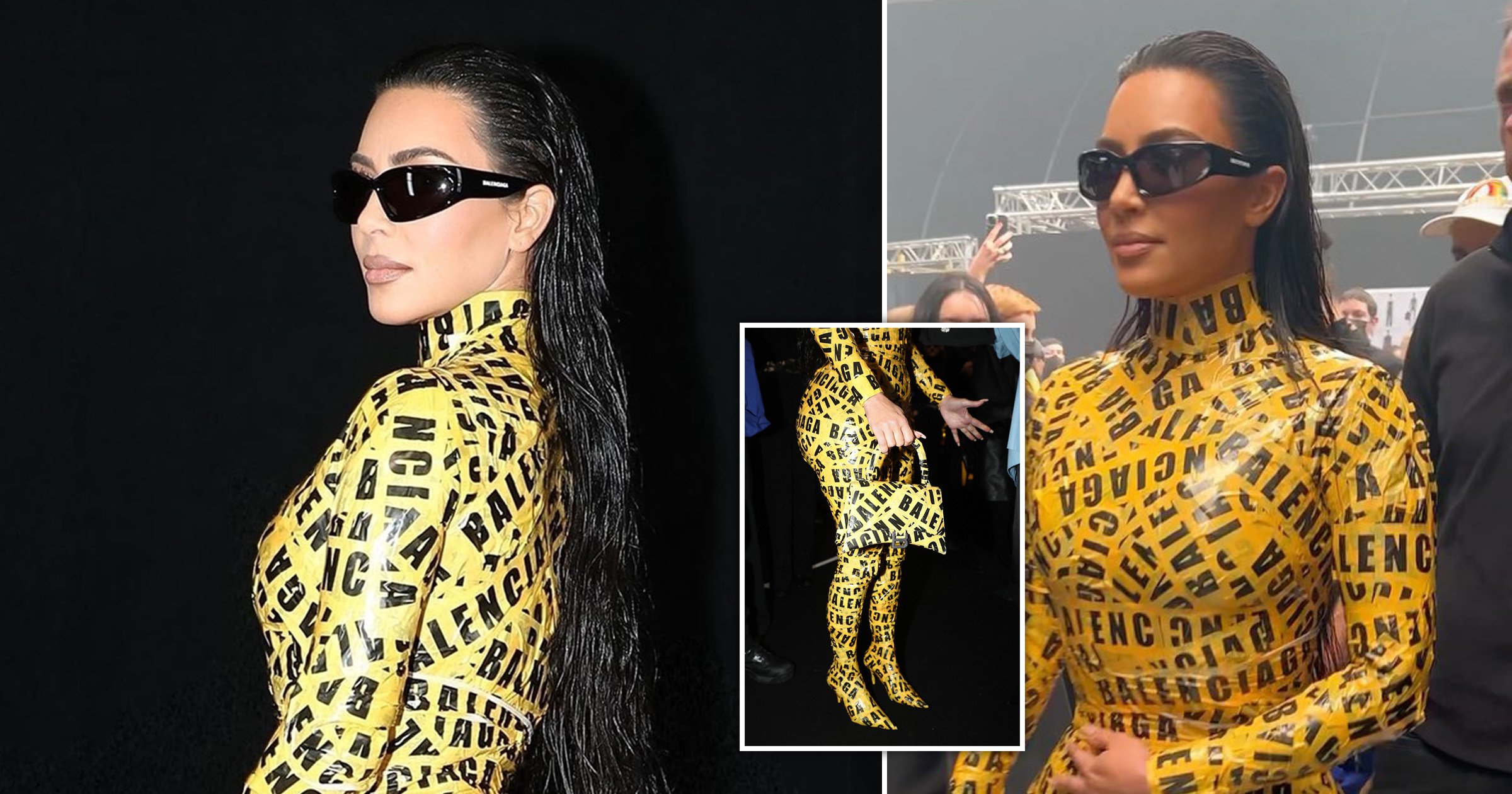 Kim Kardashian has attended the Balenciaga show in Paris completely wrapped in tape – as you do.

The Skims business mogul, 41, didn’t fail to turn heads as she appeared at the show wrapped in bright yellow tape emblazoned with Balenciaga, and her hair pulled back from her face.

She also had a matching handbag and finished the outfit off with a pair of dark sunglasses, and neutral make up.

Firstly, we have so many questions – Is it actual tape? How did she get into the outfit and how is she getting out? Can we make it ourselves at home?

Best of luck to Kim’s stylist later when she’s ready to get changed.

We salute you, hun.

The star kept a low profile earlier on Sunday morning as she entered the show, shielded by a navy umbrella as she looked chic in a white coat and black shades.

The daring look comes amid ongoing drama with her ex-husband Kanye West, 44, and her new beau Pete Davidson, 28.

On Tuesday, Kanye shared the new music video, which featured an animated version of the rapper kidnapping a cartoon Pete, throwing a bag over his head, before tossing him onto the back of a car.

The animated Kanye then buried Pete alive, keeping his head above the ground, before growing flowers on top of him.

Ending the clip, the God Digger hitmaker issued a direct message to the Saturday Night Star, saying: ‘Everyone lived happily ever after, except Skete’ before crossing out the name and writing, ‘You know who.’

A source told People on Friday that Kim was ‘very upset’ about Kanye’s behaviour.

They said: ‘She’s really upset with Kanye that he’d do this. She’s completely over all of this and she wants it to stop.’

However, Pete is said to have found the clip ‘hysterical’.

A source close to Pete told Entertainment Tonight: ‘The fact that Kanye included a cartoon version of him in his music video hysterical’.

‘He is almost flattered by it all because it is so ridiculous to him.’

They added that Pete is ‘not threatened by Kanye in any way, shape or form.’

Kanye’s estranged wife made her feelings on the video clear again, as she liked a tweet from James Gunn, in which he defended her boyfriend.

The Suicide Squad director wrote on social media: ‘For the record, Pete Davidson is one of the nicest, sweetest guys I know.

‘A truly generous, tender & funny spirit, he treats everyone around him with respect.’