Kourtney Kardashian took to Instagram to share a gorgeous pic of herself taking in the beautiful scenery of clear blue water while wearing a flattering red thong bikini and baseball cap.

Kourtney Kardashian, 41, is an incredible sight to see in her latest Instagram pic! The Keeping Up with the Kardashians star is sitting outside on a brown cushion in a red thong bikini and black baseball cap in the snapshot and a pretty view of clear blue water can be seen in front of her. Her long locks are down and appear to be wet while under the cap as the sun shines down on her.

“I think one day I’ll slip away,” she wrote in the caption. Once the pic was shared, her fans quickly replied with comments that proved they loved it. “You are charming,” one wrote while another called her “so beautiful.”

A third gushed that she was a “hottie” and many more shared hearts and heart-eyed emojis. Another fan fearlessly pointed out that “Travis is a lucky guy”, referring to Kourtney’s new boyfriend, Travis Barker, 45. 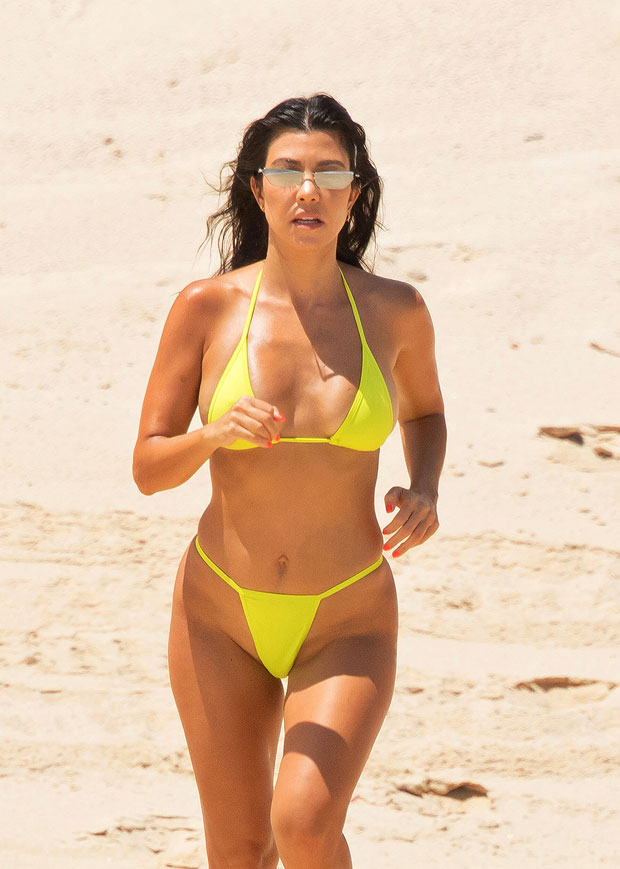 Kourtney and Travis have been friends for years and after on-again, off-again romance rumors, they finally confirmed their relationship with a pic of them holding hands last month. Since then, they’ve been seen enjoying dates together and are not afraid to openly flirt on social media. The Blink 182 drummer opened up about his new lady love in an interview on The Drew Barrymore Show and even called her “a great mom” to her three kids, Mason, 11, Penelope, 8, and Reign, 6, who she shares with ex Scott Disick, 37.

“I’m spending time with a woman who’s a great mom; who’s, like, a great friend,” he said in the Mar. 4 interview. “And I just, you don’t have to worry about any of those things. It just comes natural. It’s like a maturity thing.”

“I also really like missing someone and cherishing the time that I spend with them instead of, you know, every day being with them,” he continued. “Especially in the beginning of the relationship, I think missing someone is so important.”

Before he gushed over Kourtney in the interview, he also proved their romance is full of fun and flirtation when he shared a love note the beauty gave to him on Instagram. “To lots of fun adventures. May we destroy each other completely. Love, Kourtney,” it read.