‘Gordon Ramsay should take himself the hell out of Cornwall’: Local residents SLAM chef for leaving London and spending lockdown with his family at £4m beachfront home

Furious residents have slammed Gordon Ramsay for moving to his £4.4million mansion in Cornwall amid the coronavirus outbreak.

Nearby villages are reportedly furious with the chef, 53, after he moved there with his family in order to isolate amid the ongoing pandemic.

It comes as locals in the West Country called for tougher action to be taken on people fleeing to their holiday homes amid the coronavirus pandemic.

Second home owners were accused of sneaking into the area in the dead of night, and local authorities have now asked for road blocks to be put in place in order to stop people getting into tourist hot spots this weekend. 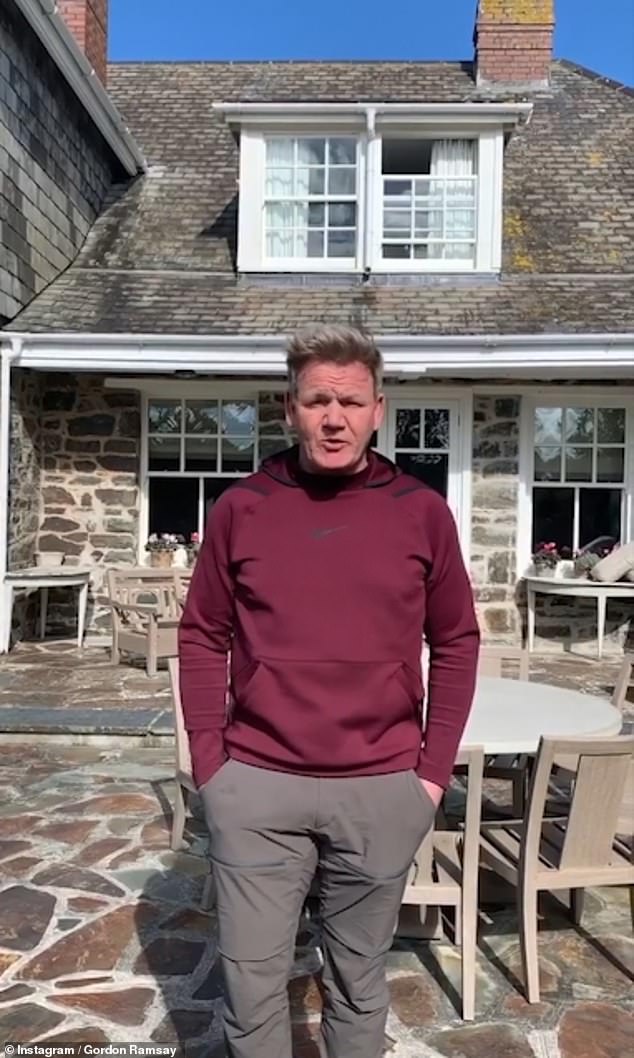 Not happy: Furious residents have slammed Gordon Ramsay for moving to his £4.4million mansion in Cornwall amid the coronavirus outbreak

According to The Sun, villagers are worried Gordon may have brought the virus with him from London and want him ‘the hell out of Cornwall’ and have even threatened to expose his address if he doesn’t leave.

In messages seen by the newspaper, nearby residents vented their frustration in a Facebook group called You Shouldn’t Be Here.

One user wrote: ‘The big s*** should take himself and his family the hell out of Cornwall.’

Another said: ‘Wealthy second homers think making a few quid means they are immune from the virus and any rules. They are arrogant at this best of times, this has shown how bad some of them are.’

One local accused Gordon of flouting government orders to stay in his primary location.

They wrote: ‘He’s swanning around the shops as if nothing is wrong.’

MailOnline has contacted a representative for Gordon for comment.

The Telegraph also reported that North Devon MP Selaine Saxby had raised concerns with ministers about second home owners sneaking into their properties to get away.

She warned that local service could be swamped if people continue to flout the rules implemented by the UK government.

She said: ‘I am deeply dissapointed at reports I have heard over the weekend of the ongoing arrival of second home owners over the cover of darkness across the country to avoid roadblocks and I’ve raised this matter directly with the police’.

Gordon, his wife Tana and their five children have been residing on the Cornish coast since the outbreak began.

The businessman recently admitted that his extended family time has proved to be anything but relaxing, as he’s constantly cooking for his sizeable brood. 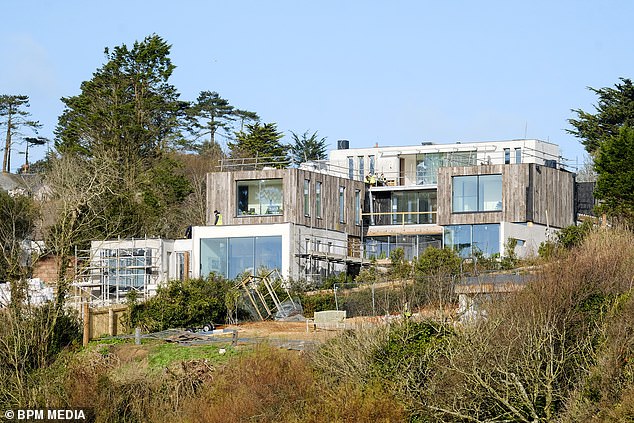 Home: Villagers are worried Gordon may have brought the virus with him from London (Gordon’s property in Cornwall pictured under construction in 2015)

In an interview with Capital FM’s Roman Kemp, the celebrity chef said: ‘Being stuck in my house with these five ravenous kids is a living nightmare. Can you please tell me when all of this will end?

‘Every single day is the same. I’m the resident kitchen porter, working my fingers to the bone. I have honestly cooked more food in the past ten days than I have in the past ten years of my career.’

The TV personality revealed he is slaving over the stove around the clock for Megan, 22; twins Holly and Jack, 20; Tilly, 18, and son Oscar, who turned one on Saturday.

He said: ‘As soon as I get up in the morning, I’m off down to the local butchers to buy some meat for their dinner. When I get home, I make the breakfast straight away. 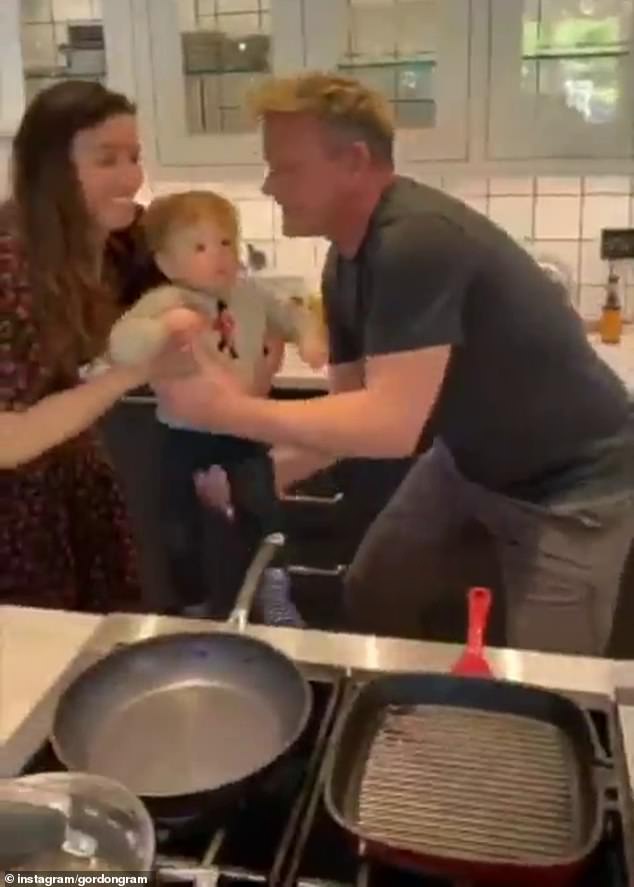 Busy: Gordon recently admitted that his extended family time has proved to be anything but relaxing, as he’s constantly cooking for his sizeable brood (pictured with Tana and son Oscar)

‘After that, I’m back over the stove cooking lunch. After they have gobbled up their grub, I try to escape for a quick run every day just to get away, and after that I’m back in the kitchen making bl**dy dinner again.

‘I swear that I have blisters on my bl**dy hands from cooking so much.’

However, while the star shared his tongue-in-cheek gripes with Roman, he also said that spending time at home has afforded the family many benefits.

‘We have been eating so well,’ he explained. ‘Now that I have all the time in the world, I have the opportunity to put even more effort in.

‘We’ve had some of the best curries of our lives, and I’ve been able to curate some fantastic new recipes. So I guess it’s not all that bad actually.’ 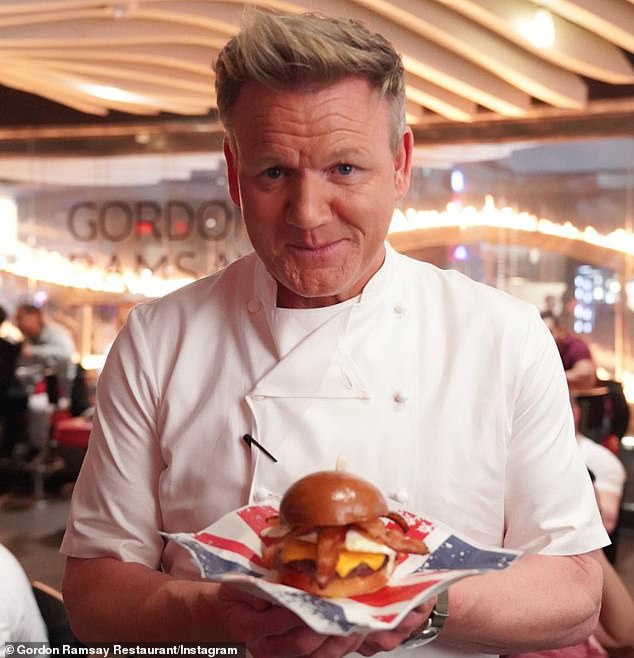 Blisters: ‘I swear that I have blisters on my bl**dy hands from cooking so much,’ the star said

On Saturday, the star had much to celebrate as the family marked his baby son Oscar’s first birthday.

Adorable tot Oscar featured in a slew of snaps posted by his siblings to mark the occasion, including one from the chef himself with his little boy.

In his snap, Gordon had Oscar happily perched on top of his head, with the caption reading: ‘Happy Happy 1st Birthday to this little Boy have a great day Oscar love you Daddy.’

The TV star’s wife Tana shared an equally sweet post of little Oscar in makeshift den at their home, along with a gushing post to mark his birthday.

She penned: ‘Happy happy 1st Birthday little man x this year has flown by and we are just so grateful to share it with you – our absolute joy x have the best day little one x.’ 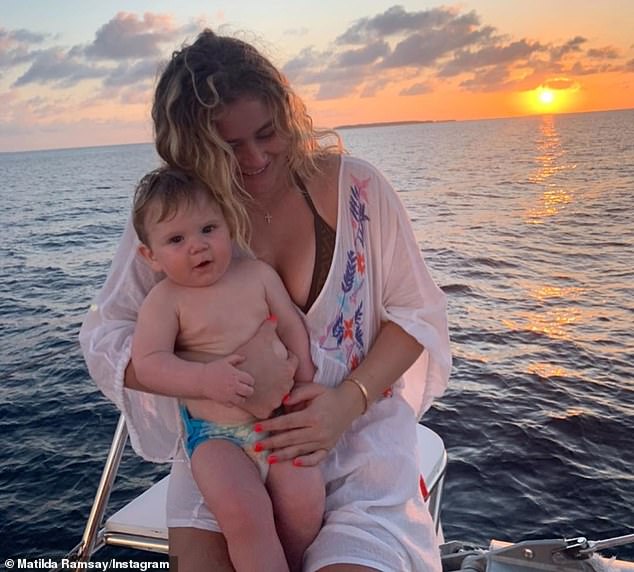 Sweet: Gordon’s son Oscar has celebrated his first birthday, and his family marked the occasion with a slew of adorable social media snaps

Gordon’s daughter Megan, 22, shared a slew of snaps with her little brother, displaying his array of cute expressions.

She wrote: ‘Happiest happiest 1st birthday to my little best friend no idea where a year has gone but all I know is that you make everyday amazing and we all love you so much.’

Tilly, 18, shared her own heartwarming image from a family holiday with little Oscar in her arms, as she wrote: ‘Happy 1st birthday to the best. I love you so much.’

Gordon revealed last month that he would be doing his part to help stop the spread of the disease by shutting all 13 of his UK restaurants in line with government orders.

Posting a statement on social media, Gordon wrote: ‘To all our Gordon Ramsay family, friends and colleagues. 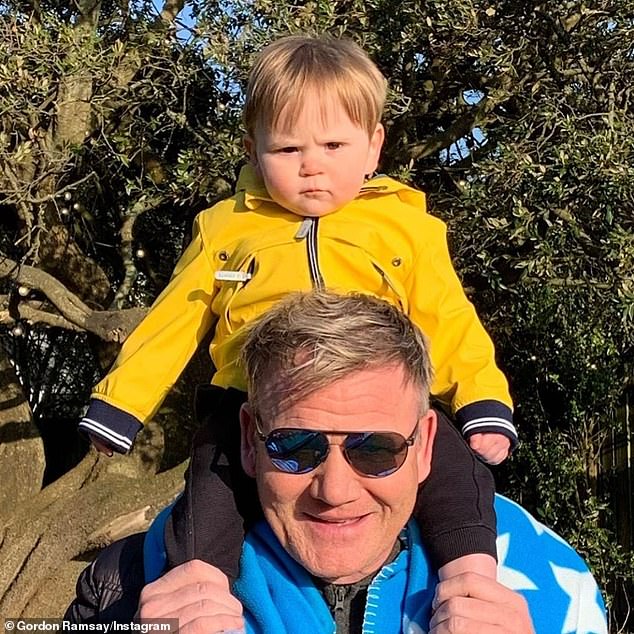 Cute: The TV chef shared one with his son perched on his head to mark the occasion during the coronavirus lockdown

‘In this time of great uncertainty, we hope that you all are looking out for each other and staying as safe as possible.

‘As the situation changes daily out focus has to be on the health and safety of our employees, guest and community and to do our part in slowing the spread of the virus, from Saturday 21st March 2020, all our London restaurants will temporarily close.’

He added: ‘Whilst we don’t know when we will re-open, what we do know is by supporting each other through this terribly challenging time, we will come through this stronger than ever!’

‘Huge love and thanks to our amazing staff across the restaurants for all their passion and support. I truly hope we are all back together very soon. Gordon.’ 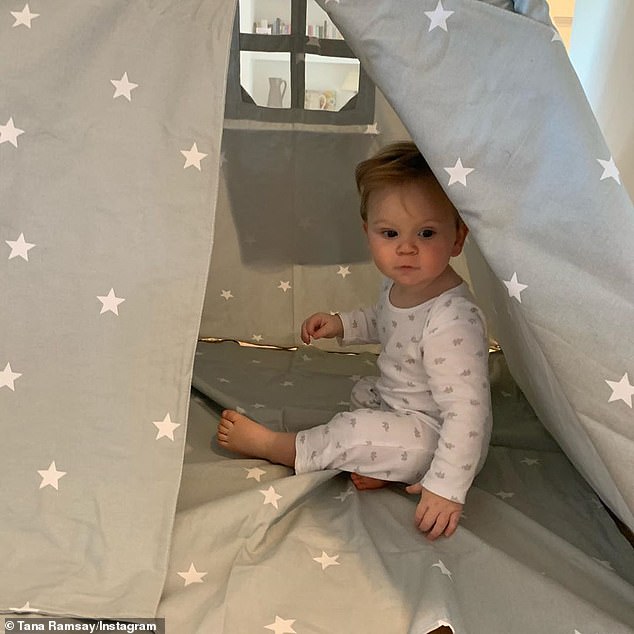 Adorable: Gordon’s wife Tana shared her own lovely image of Oscar dressed in a cute white baby grow in a makeshift den 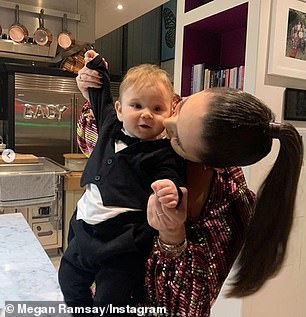 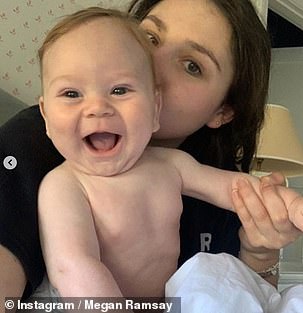 Cuddles: Gordon’s daughter Megan, 22, posted a gallery of snaps from Oscar’s first year along with a gushing caption describing as ‘her little best friend’