Logan Paul DISMANTLED the entire Gronkowski family — in front of their dad — and the violence was all captured on video!

As we previously reported, Logan invited Rob and his 4 bros to a training session as he gears up for his big June 6 match against Floyd Mayweather.

The bros — Glenn, Dan, Chris and Gordie — all agreed to take go 1 round each with Logan … full speed, fun strength with Rob serving as referee.

First up was Glenn … a 6’3″, 234-pound former NFL player who spent time with the Patriots.

Look, Glenn put up a good fight but it was clear he was just outmatched by Logan who dominated until they stopped the fight.

Round 2 was Chris Gronkowski’s turn … the former NFL fullback got rocked right away and the fight was quickly stopped.

Round 3 featured Dan Gronkowski — a former NFL tight end who played for the Lions, Broncos, Pats and Browns.

Dan did not do well — getting rocked hard and dropped. They stopped that pretty quickly, too.

Finally, it was Gordie’s turn … and Logan smothered him with a barrage of power shots until Rob stepped in and pulled them apart. 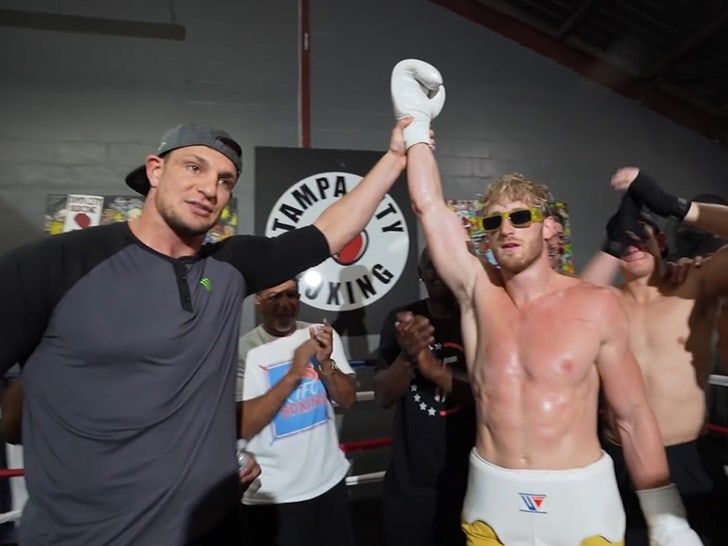 After the session, Rob praised Logan for being a beast — and gave respect to his bros for having the balls to take on a guy who’s been training like a maniac for the past several years.

Bottom line … Logan Paul’s no joke but Floyd Mayweather is on a whole other level!