The singer, 62, was joined by five of her six children to mark her father’s special day in Suttons Bay. She also shared the occasion via a video on social media. The popstar joined her father with children Lourdes Leon, 24, David Banda, 15, Mercy James, 15, and twin daughters Stella Ciccone and Estere Ciccone, eight. Son Rocco Ritchie, 20, by ex-husband Guy Ritchie, did not appear to be in attendance. Posting a video of the family reunion, Madonna told how her father had “lived through many traumas” after growing up in the US as an Italian immigrant. 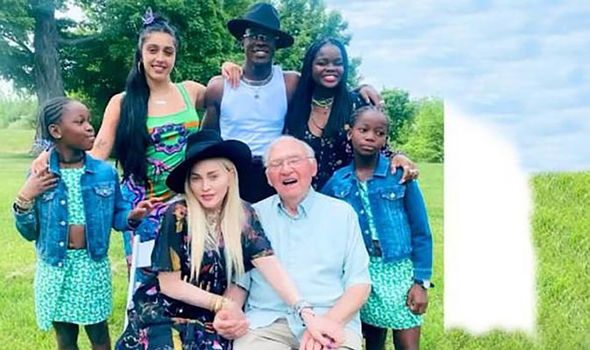 Madonna wrote: “My father is a survivor, growing up as an Italian Immigrant in the US and living through many traumas but always working hard for everything he had.

“He taught me the importance of hard work and earning one’s way in life. Again, I thank you.

“It was so special to spend your 90th birthday with you and my children in your vineyard.”

Ciccone Vineyard and Winery, which was established in 1995, is run by Silvio and his wife Joan.

The Crazy For You singer also shared a black-and-white snapshot of her hugging her father from behind and an image of herself as a baby alongside her parents.