Marjorie Taylor Greene complained on Twitter that the platform “censored” her 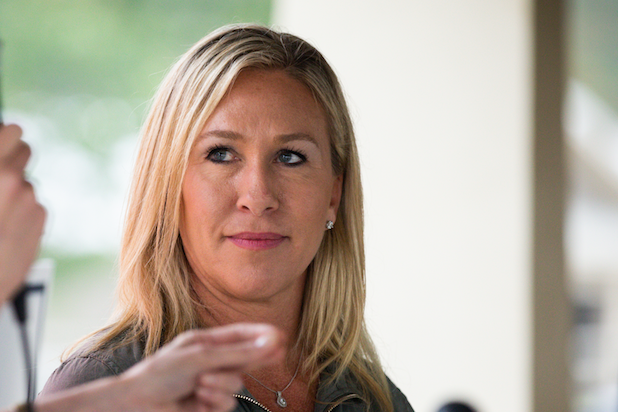 Marjorie Taylor Greene, a Georgia Republican elected to the U.S. House of Representatives this week who supports the QAnon conspiracy theory, is accusing Twitter of censorship after the social media giant labeled 20 of her tweets as “misleading” since Election Day.

She joins President Donald Trump and many of his allies in having her tweets about the election labeled by the company because the content “might be misleading about an election or other civic process.”

“Twitter censored me ALL day yesterday,” Greene wrote Thursday, urging her followers to sign a petition against what she called the theft of the election. She and Trump are among those claiming Democratic nominee Joe Biden is being assisted in somehow stealing the election because the mail-in votes that are still being counted tend to have gone to the Democrat. There is no basis for the claim that the election is being stolen.

In another tweet railing against her labels, Greene wrote, “The Silicon Valley Cartel MUST BE STOPPED!”

In one of her labeled tweets, she claimed Georgia “belongs” to the president. The primary theme of the tweets that were dubbed “misleading” was the so-called “steal” she said Democrats are attempting to pull off.

On Wednesday morning, as mail-in ballots were still being counted in a handful of key states, the president baselessly tweeted, “Last night I was leading, often solidly, in many key States, in almost all instances Democrat run & controlled. Then, one by one, they started to magically disappear as surprise ballot dumps were counted. VERY STRANGE, and the ‘pollsters’ got it completely & historically wrong!”

A rep for Twitter did not immediately respond to a request for comment about Greene’s complaints. On Wednesday, a spokesperson explained its labeling policy: “As votes are still being counted across the country, our teams continue to take enforcement action on tweets that prematurely declare victory or contain misleading information about the election broadly. This is in line with our Civic Integrity Policy and our recent guidance on labeling election results.” The company added that numerous tweets had been labeled and seen their engagement limited.