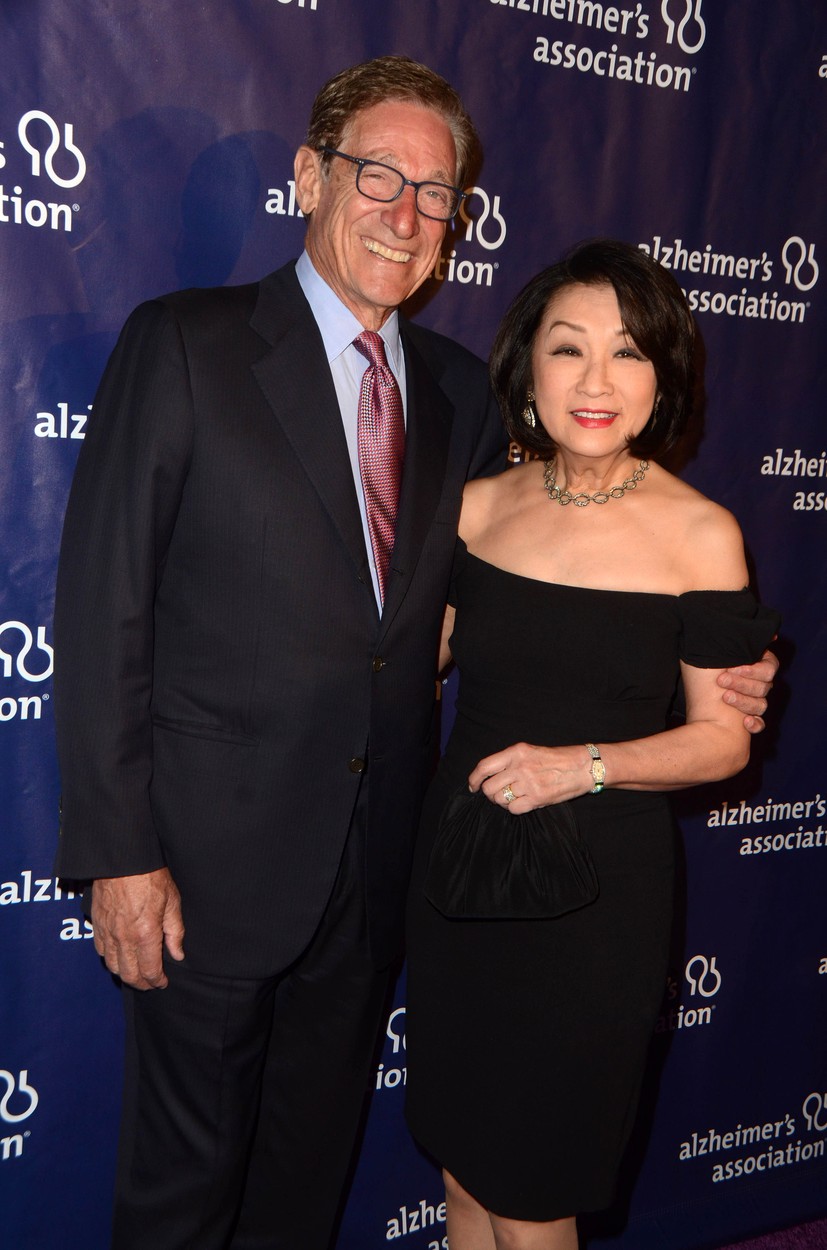 Connie Chung, 74, and Maury Povich, 81, did an interview with Access. They were standing in front of a door for some reason. It was one of the weirdest backdrops I’ve seen on a Zoom interview. These two have been married for 42 years, People Magazine has a new article about it, and they’re one of those bickering couples you can tell. Maury complained about Connie reading newspapers in bed and she said that she does that so she’s not kept awake by her phone. Connie complained about Maury going to bed and forgetting their arguments and Maury said Connie holds grudges. Sometimes you wonder why people like that are married, but it works for them and they’ll talk about it. Maury and Connie admitted that they dated non-exclusively for seven YEARS when he was in Philadelphia and she was in Los Angeles for their careers. They were both seeing other people and hooking up occasionally. At one point they went to Italy and Maury proposed. Connie said no, but accepted three weeks later when she found a wedding dress she liked. They may have told this story before but it’s news to me and I wanted to talk about it. They really gave each other sh-t.

Connie on marriage:
Every day it’s a pain. You know you gotta work on it.

Connie on dating for seven years non-exclusively
I thought it was great seven years of total freedom but being able to see each other hook up once in a while.

Maury and Connie on dating other people
Maury: She was working in LA and she was the big rock star out there… ticking off all the stars she was dating

Connie: You were in Philadelphia. You were such a bad boy. You couldn’t even remember the first names nevermind the last names of the women you slept with. He had to chew off his arm. You know when you wake up in the morning and you see someone you’ve never seen before. Get out of there.

Connie said she’s working on her memoir and Maury bitched that she hasn’t let him read it. Towards the end of the interview Connie said she succeeded in her career thanks to the Civil Rights Act and that she just thought of herself as a white man at the time. She seemed really serious about that too, like it wasn’t just a metaphor.

I did the math and Connie was 38 when they got married and Maury was 45. They were both focused on their careers before that and they seemed to be fine with the fact that they were seeing other people. It was hilarious when Connie joked that Maury was hooking up with women who would make him want to chew his arm off to escape when he woke up. (Sidenote Mario Lopez claimed that “coyote ugly” refers to someone who is so ugly you’ll bite your arm off to get rid of them. I googled it and I don’t think that’s what it means.) I would not have accepted a hookup situation in my 30s, but I did that in my 20s a little. I do not sleep with more than one person at a time as I’m a monogamist and it grosses me out. This is the first time I’ve heard of an arrangement like that ending in marriage. I do wonder though, if they were faithful to each other after they got married. It’s not like a switch flips after marriage. You’re still the same two people.

Also I didn’t realize the Maury Povich show is still airing. It’s been on since 1991!