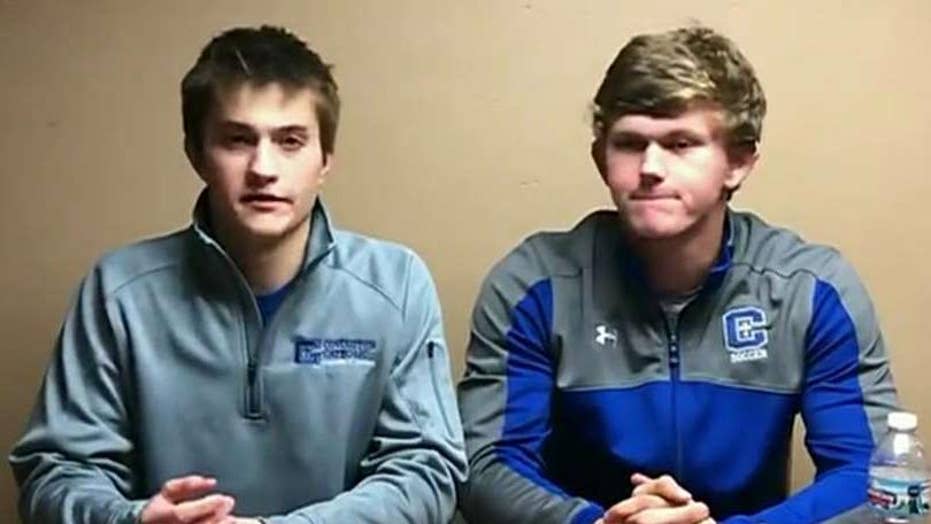 Covington Catholic High School student Nick Sandmann and his classmates have been attacked by everyone from respected journalists to B-, C- and D-list celebrities to the point that a neutral observer might think they’re gunning for a spot on the Supreme Court.

Conservative strategist Chris Barron told Fox News that this is actually “way worse” than the way Supreme Court Justice Brett Kavanaugh was treated.The shocking vitriol directed at the MAGA hat-wearing teens, before video evidence showed they were innocent of instigating the confrontation, has shown a disturbing willingness among some on the left to demonize even children, as long as they are seen as conservative.

TUCKER CARLSON: COVINGTON STORY WAS NOT ABOUT RACE BUT ABOUT PEOPLE IN POWER ATTACKING PEOPLE THEY'VE FAILED

“Not only was there a rush to judgment here, the initial story has been unquestionably debunked and yet some in the media and on the left still refuse to apologize for their initial attacks,” Barron said. “On top of everything else, we are talking about an attack on children. It’s so much worse than Kavanaugh and even more appalling.”

Many members of media and several Hollywood heavyweights rushed to judgment after a video clip emerged Saturday that gave some critics an inaccurate impression that the teens were harassing a Native American man, Nathan Phillips, following the pro-life demonstration. The outrage was swift and harsh — the Kentucky school is now closed due to safety concerns. Fox News’ Tucker Carlson called the situation a “celebration of outrage,” because nothing satisfies critics more than having their own biases confirmed.

Subsequent video footage released over the weekend revealed the students were accosted and yelled at before Phillips and other Native American activists approached them. Another group – the so-called Black Hebrew Israelites – were heard shouting abuse at the students for wearing “Make America Great Again” hats.

Once the second batch of video surfaced, several critics took back their initial remarks and apologized. CNN’s S.E. Cupp even wrote that she wished she had the fuller picture before weighing in. Hollywood producer Jack Morrissey apologized for joking about the “MAGA kids” going “screaming, hats first into the woodchipper,” according to TheWrap.

But not everyone who piled on the students owned up to it once additional information became available.

Some critics quietly deleted criticism from social media without offering an explanation or apology, while others attempted to prove the original narrative instead of simply admitting they overreached.

The New York Times published a story Monday that notes “more videos later emerged complicating the story” and that families said they were receiving death threats yet managed to dig up as much dirt on the community as possible.

The Times report mentioned a former Covington graduate who has been charged with rape, racism at a different Cincinnati-area school, Catholic students’ pro-life stance and a parent from a rival high school noting peer pressure exists. While none of these issues directly link to the incident that occurred over the weekend, they seem aimed at buttressing the narrative that Covington students are bad.

The situation is similar to what occurred when Kavanaugh was accused of sexual misconduct during his confirmation process. Media members looked for scandalous details surrounding anything that occurred at Kavanaugh’s high school at the time of the allegations, much like the Times published a list of wrongdoings in the Covington area.

BUZZFEED WRITER COMPARES COVINGTON STUDENT TO KAVANAUGH: ‘IT'S THE LOOK OF WHITE PATRIARCHY’

The New York Daily News even published an unverified image of possible Covington students in “blackface” from several years ago.

“This won’t help Kentucky student Nick Sandmann’s case,” the Daily News wrote. “A photo said to be featuring Covington Catholic High School students clad in blackface during a 2015 basketball game made the rounds on Twitter Monday.”

It’s unclear why a photo from 2015 would hurt Sandmann’s “case” and the paper did not immediately respond to a request for comment.

The Media Research Center has been monitoring the situation closely and accused “NBC Nightly News” of “refusing to retract” and doubling down on its original report. A study by the MRC’s NewsBusters indicated that CNN and MSNBC spent 53 minutes on the story over the weekend with 29 of the minutes coming before the additional footage surfaced.

“It would have been easy for any individual person on either network to admit on-air Sunday that they were wrong, but that’s of course not what happened,” managing editor Curtis Houck wrote.

BuzzFeed senior culture writer Anne Helen Petersen tweeted an attack on Sandmann, singling out the MAGA hat-wearing teen in a lengthy thread that compared his appearance to a young version of Kavanaugh. A freelance Vulture journalist was fired from his main job at digital company INE Entertainment after wishing death for multiple Covington students and their parents.

Kathy Griffin called for the students to have their identities revealed so that she and others can hold them accountable for their actions.

“I want NAMES. Shame them. If you think these f—–s wouldn’t dox you in a heartbeat, think again,” Griffin wrote.

Griffin then praised the BuzzFeed writer’s attack, calling it “yummy” and “delicious.”

The National Review seemingly deleted an article that said the students “might as well have just spit on the cross.” New York Times star reporter Maggie Haberman suggested the students should be kicked out of school but eventually tweeted an article detailing the “fuller picture” of the situation.

CNN’s Bakari Sellers deleted a tweet that called the teenager “deplorable” and encouraged punching him in the face.

CNN did not immediately respond to a request for comment.

Not everyone deleted their scolding hot takes and several other attacks on the teenagers remain on Twitter.