Kensington Palace has issued a rare statement about a recent alleged argument between Meghan Markle and Kate Middleton. A Palace spokesman denied the claim saying, ‘This never happened.’

Meghan Markle is finding it “frustrating and stressful” that she has “no voice” against a barrage of bad headlines, a new report has claimed.

The pregnant Duchess of Sussex is said to be “fed up” that royal protocol means she isn’t allowed to “stand up for herself”, US Weekly reports.

Since it was announced she and Prince Harry were moving out of Kensington Palace, multiple reports have claimed Meghan is responsible for a rift between the two brothers and had been “demanding” towards staff.

Apart from denying that Kate reprimanded Meghan for giving out to her staff, Kensington Palace has refused to comment on mounting reports of a division between the Cambridges and Sussexes. 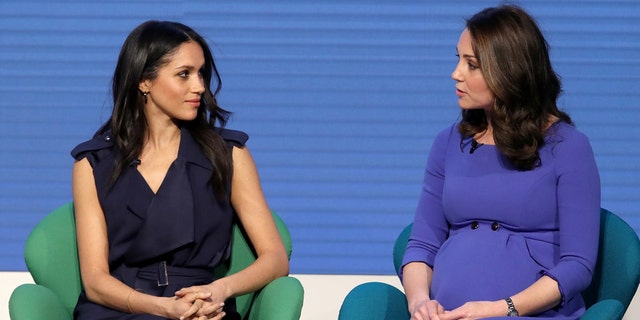 Meghan Markle and Kate share words during an event.
(Reuters)

That Meghan can’t stand up for herself using social media has proved frustrating and has left Harry feeling the pressure too, US Weekly claims.

“She’s always relied on her own voice to stand up for others, and for herself. So not being able to say anything is a debilitating feeling,” a source told the magazine.

In the months before her marriage to Harry, Meghan shut down her Instagram and Twitter, with Hello! magazine reporting working royals aren’t allowed to have their own social media accounts.

But minor non-working royals are permitted to have them, with Princess Eugenie opening a public Instagram account this year.

Before her relationship with Harry Meghan was an avid social media user, posting on everything from politics to glamorous overseas holidays.

Earlier this week, a candid boomerang-style post of Meghan at the British Fashion Awards was mysteriously wiped from Instagram.

A photo of Meghan at the awards posted by her best friend and stylist Jessica Mulroney was also deleted.

This article originally appeared on News.com.au.