Pump really does rule. Miley Cyrus partied hard with the cast of Vanderpump Rules, including Lisa Vanderpump, on Friday, March 22.

The “Wrecking Ball” singer, 26, and Real Housewives of Beverly Hills star, 58, were hanging out with Pump Rules costars Tom Sandoval, Tom Schwartz and Scheana Marie at Tom Tom, a source told Us Weekly. “They FaceTimed with James Kennedy who is deejaying a show [on Saturday] in DC with [Miley’s sister] Brandi Cyrus. And they were dancing and enjoying the night together along with other friends too.”

The source continued, “Then Tom, Scheana and Miley headed to Doheny Room and hung out at a VIP table. They arrived there around 12:30 a.m. and stayed until 2 a.m.”

Kennedy, 27, posted a video of the interaction to his Instagram. In the clip, Cyrus can be seen sending him a heart gesture with her hands, while Scheana blows a kiss and Sandoval talks into the screen (the video is mute). The DJ captioned the video, “@mileycyrus and I on FaceTime?! Thanks @tomsandoval1 can’t wait to play @shamrockfestdc tomorrow with @brandicyrus

@mileycyrus and I on FaceTime?! Thanks @tomsandoval1 can’t wait to play @shamrockfestdc tomorrow with @brandicyrus

The Hannah Montana alum, for her part, shared a video on Instagram Stories of her dancing with a dog alongside the restaurateur and animal activist and Sandoval grooving by himself in the L.A. bar, “This is the definition of GOOPED!!!!” she wrote. 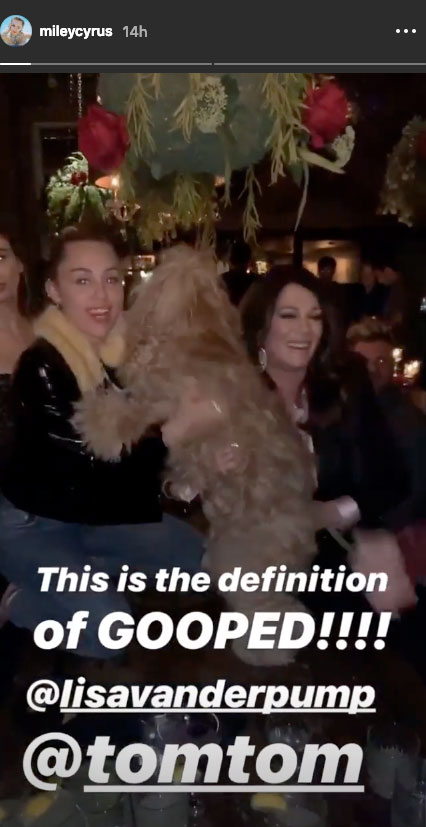 Lisa Vanderpump is no stranger to celebrity visits. On March 17, Lady Gaga hung out with the Bravo star and her husband, Ken Todd at their West Hollywood restaurant PUMP. An eyewitness exclusively told Us the singer, 32, was there around 11 p.m., along with Sandoval, 35, and VPR costar Billie Lee.

“They were all in great spirits, drinking and dancing. I got to dance with Gaga and talk to her. … She was so sweet, and I told her how I’m pursuing acting, and she told me to never give up and [that] she believes in me. She could not have been sweeter,” the source told Us, adding that the group later headed over to Tom Tom.