Myleene Klass proudly displayed her baby bump after she revealed she’s expecting her first child with her beau Simon Motson on Friday.

It is one day after the singer, 40, shared the happy news by posing for a lingerie snap on Instagram on Valentine’s Day, where she is already showing off a large bump.

The smiling pregnant star showcased her growing stomach in a fitted top as she left her workplace at Global studios, in London. 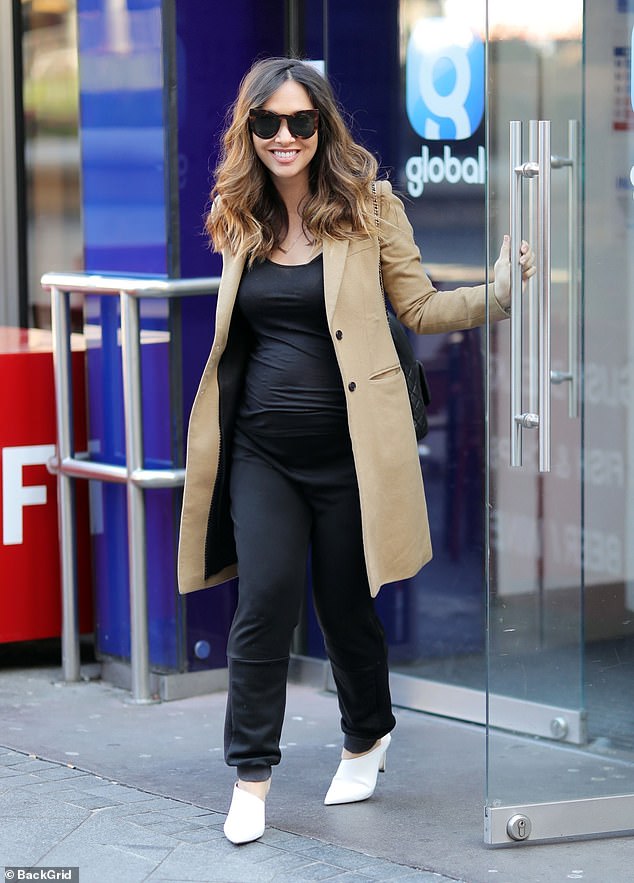 Pregnant again! Myleene Klass proudly showed off her baby bump as she was seen for the first time on Friday since revealing she’s expecting her first baby with beau Simon Motson

Mother-of-two Myleene, who is expecting her third child, sauntered out of the London-based studios in her backless heeled boots.

A natural beauty, Myleene showed pregnancy suited her down to the ground as she only polished off her features with a light dusting of make-up.

The pregnant songstress made a fashion statement with her tortoise shell sunglasses which had huge cat-eye frames. 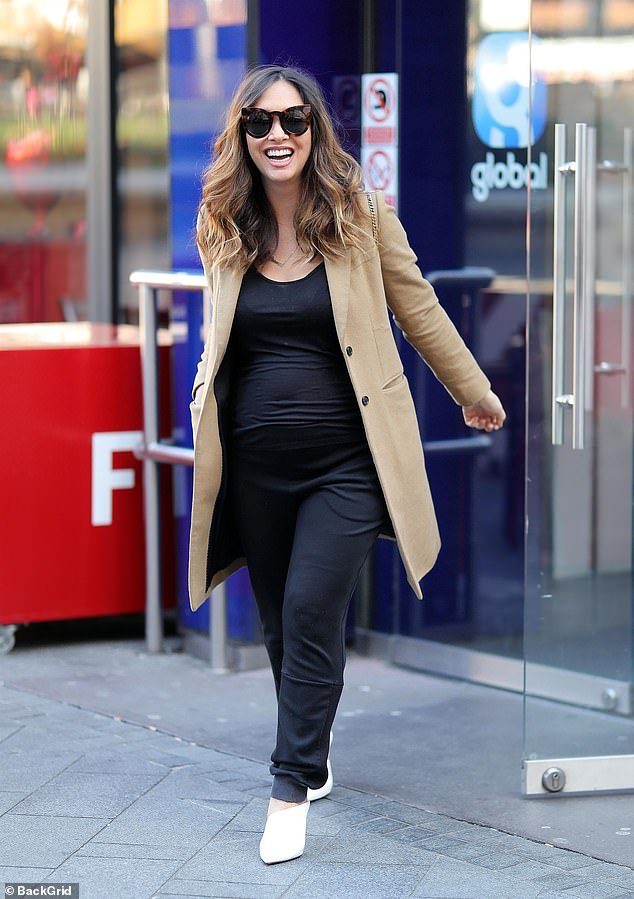 Chic looks: Mother-of-two Myleene, who is expecting her third child, sauntered out of the London-based studios in her backless heeled boots 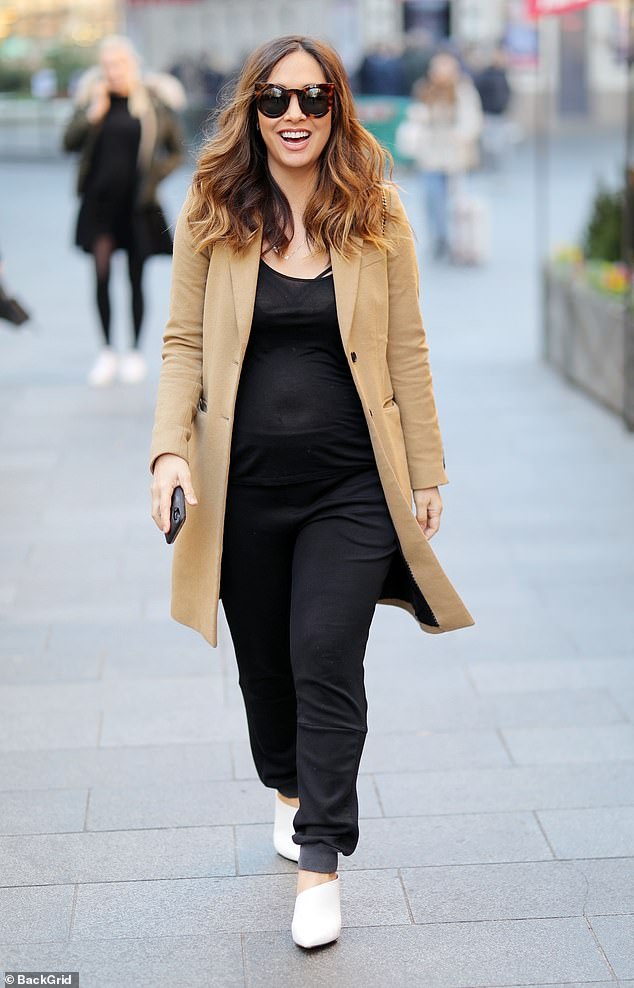 Bumping along: A natural beauty, Myleene showed pregnancy suited her down to the ground as she only polished off her features with a light dusting of make-up

Myleene’s outing comes the day after she broke the news she was expecting her third child but her first with her PR guru boyfriend.

The TV star and fashion PR went public with their relationship in May 2017 and between them share four children from previous relationships.

The Instagram photo posted on Thursday afternoon shows the star posing in black lingerie with her hands lovingly resting on her sizable bump. 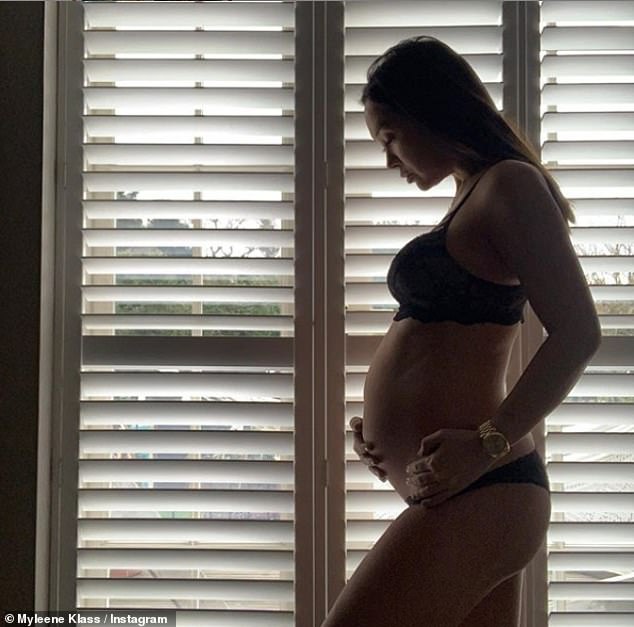 Myleene is a devoted mother to daughters Ava, 11, and Hero, seven, who she shares with her ex-husband Graham Quinn.

They now happily make up a family with Myleene’s boyfriend Simon and his brood, a son and daughter from his previous marriage.

Her new love comes six years after her failed marriage with the father of her two daughters, Graham Quinn, 41. 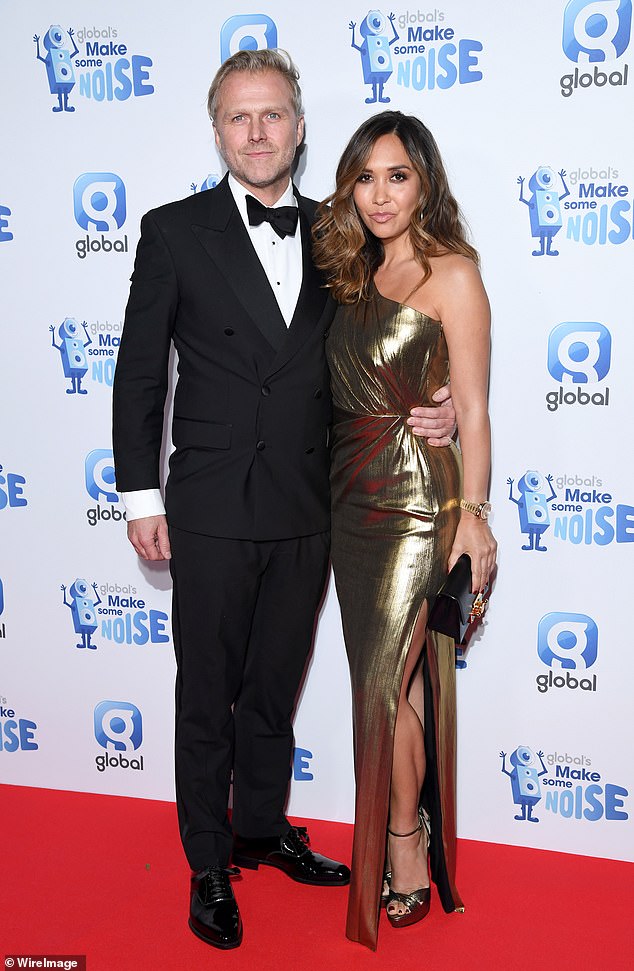 Happy news: Myleene and fashion PR Simon went public with their relationship in May 2017, and between them share four children from previous relationships

The bodyguard walked out on her 34th birthday in April 2012 putting an end to their love, with their divorce finalised in 2013.

Discussing her devastation, she admitted to Woman magazine: ‘I thought I’d never smile or trust anyone ever again’.

But speaking earlier this month to Fabulous Magazine of her romance with Simon, she mused: ‘How awful that I could have gone through my life and not met him. Imagine never getting why people write those crazy love songs or do crazy things.’ 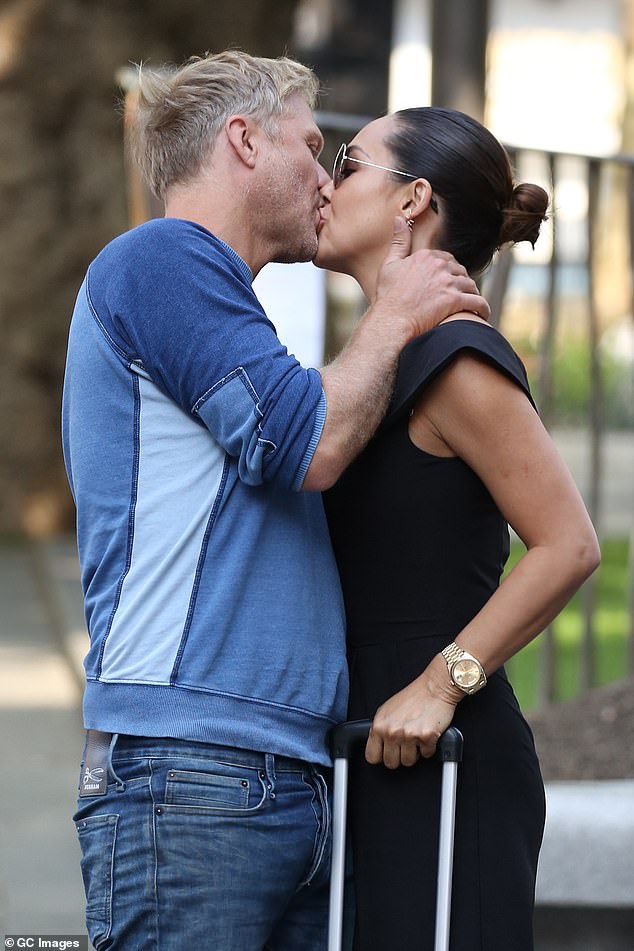 Moved on: Her new love comes six years after her failed marriage with the father of her two daughters, Graham Quinn, 41

‘I get it now as a grown-up, and it’s a lovely, lovely thing. To feel like this is a whole other level, and it’s quite incredible. I’m just very happy. About time, eh?’

Myleene told the publication that a girlfriend rang her and said she knew a guy who had been through a similar situation to her.

He had been single for three years and they have the same aged children and they were both ready to commit. 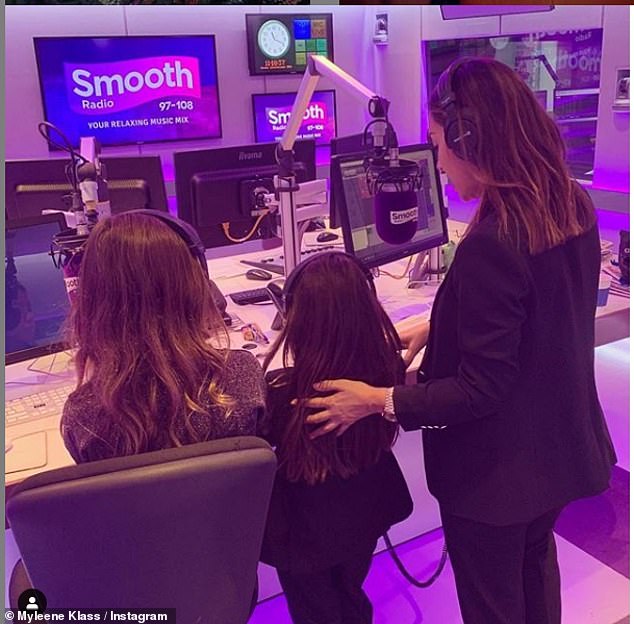 Mum: Myleene is mother to daughters Ava, 11, and Hero, seven, who she shares with her ex-husband Graham Quinn, while Simon has a son and daughter from his previous marriage 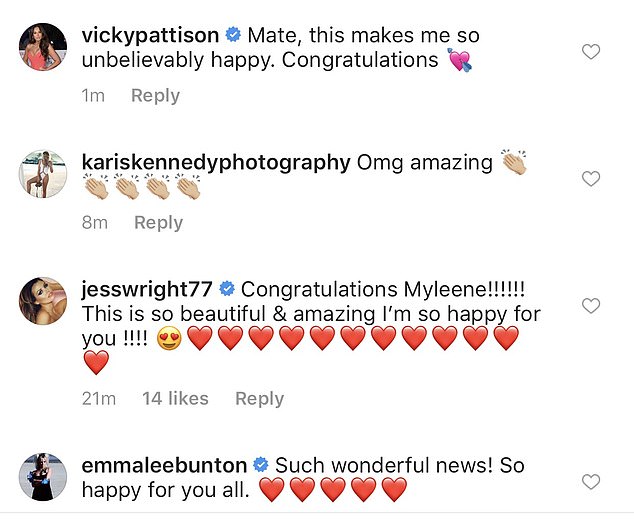 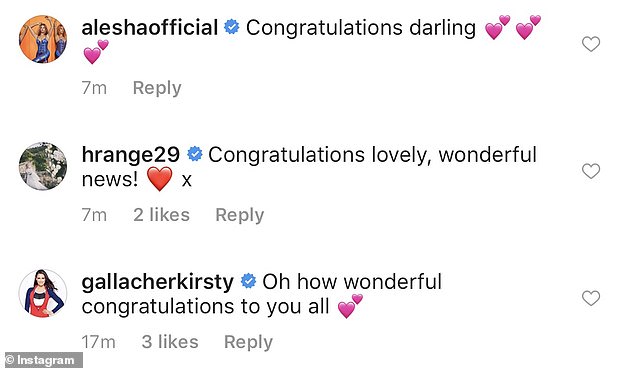 Congrats! A host of stars rushed to congratulate the former Hearsay singer on her pregnancy

She said: ‘And yes, it was instant. You think that only happens when you’re teenagers, but it was genuine and not some knee-jerk reaction.’

They waited a year before meeting each other’s children and now as a blended family and call themselves the Klotsons.

A host of stars rushed to congratulate the former Hearsay singer on her pregnancy. 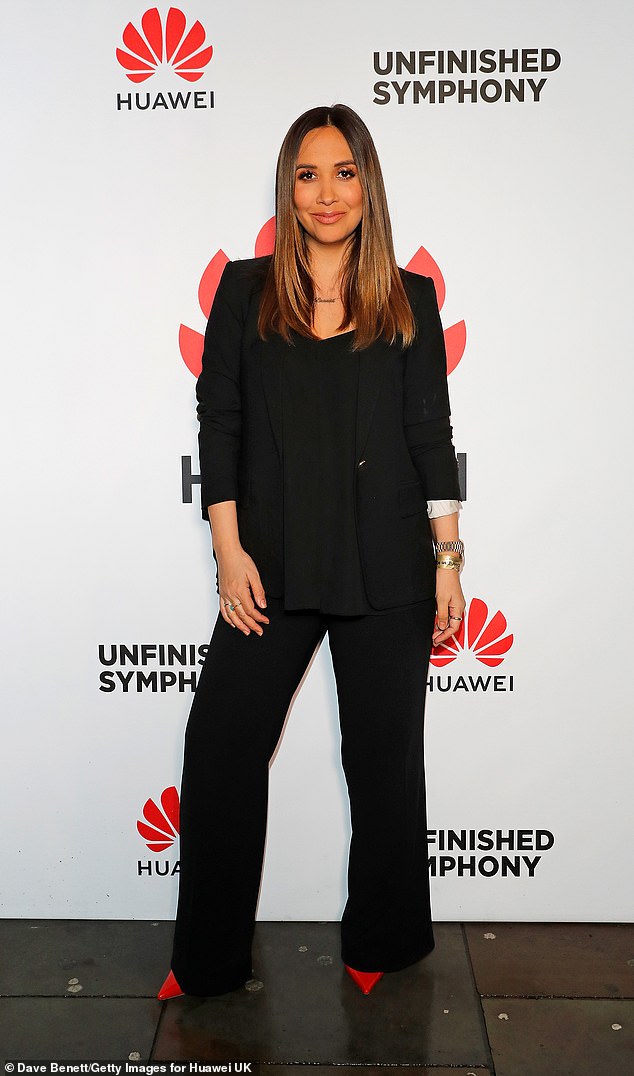 Hiding it well! Myleene has managed to conceal her pregnancy, hiding her bump under a loose top on February 4 at the Huawei Unfinished Symphony event

Jess Wright wrote: ‘Congratulations Myleene!!!!!! This is so beautiful & amazing I’m so happy for you!!!!’

Spice Girl Emma Bunton gushed: ‘Such wonderful news! So happy for you all,’ as Kirsty Gallacher added: ‘Oh how wonderful congratulations to you all.’ 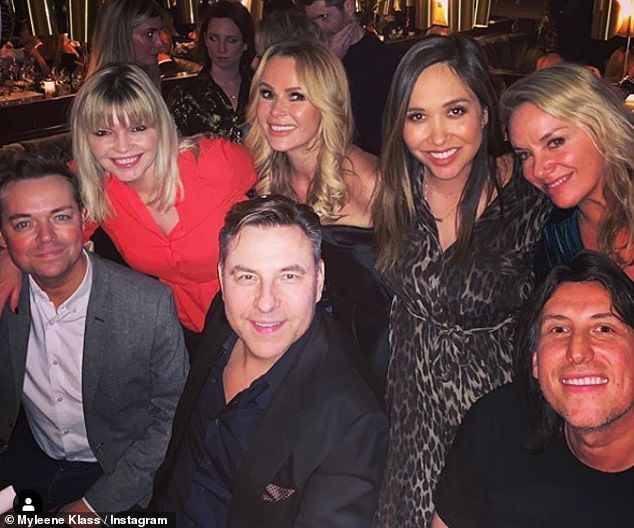 Sharing the news? Myleene was out with her close pals Amanda Holden, Steven Merchant, David Walliams and Kate Thornton on Wednesday night to celebrate Amanda’s birthday

Vicky Pattison shared her excitement for Myleene, writing: ‘Mate, this makes me so unbelievably happy. Congratulations.’

Ever the funny man Keith Lemon joked: ‘What? You’ve been having sex?!!!!! I would never have thought you would do such a thing Myleene you dirty so and so! Well done! Xx

Kate Thornton shared a heartfelt message, which read: ‘How lucky is this baby to have you and @simmotson to love and steer them through life. And thank God I don’t have to keep sticking my handbag over your belly when we’re out anymore! X.’ 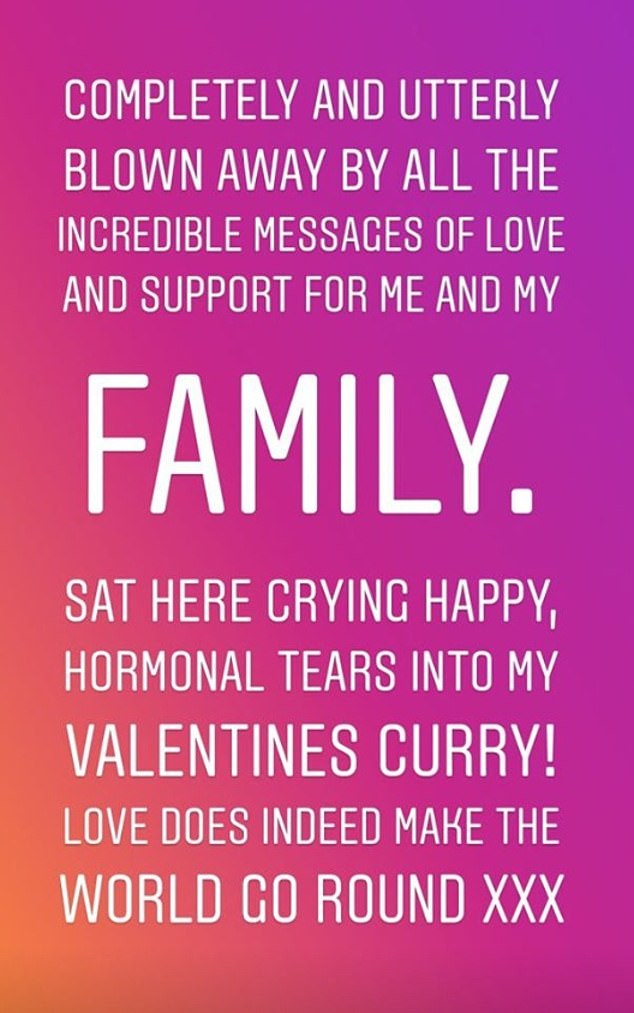 Happiness: Myleene later took to Instagram Stories, admitting she was ‘crying happy hormonal tears’ after reading all the messages

Myleene was out with her close pal Kate on Wednesday night to celebrate Amanda Holden’s birthday, with Amanda also commenting on Myleene’s post that she was ‘thrilled and relieved’ the news was out.

The star later took to Instagram Stories, admitting she was ‘crying happy hormonal tears’ after reading all the messages. 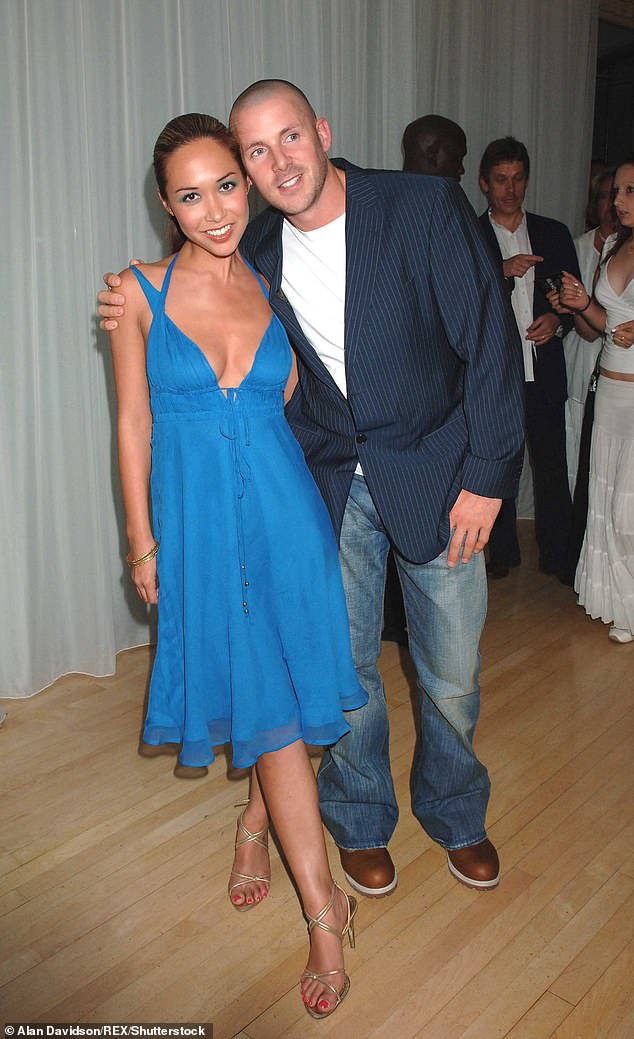 Ex: Myleene recentlydetailed how she developed a dependence on alcohol during her divorce from Graham Quinn in 2013

Myleene recently detailed how she developed a dependence on alcohol during her divorce from Graham Quinn in 2013.

Speaking candidly to Kate Thornton and Tamzin Outhwaite on Yahoo’s White Wine Question Time podcast, she admitted her drinking would start before 11am and she would struggle without alcohol in five hour gaps.

On the split, she said: ‘The humiliation, you’ve got people looking at you, blaming you without a clue as to what the f**k is going on…

‘Lauren (Laverne) came and visited me at 4 in the morning, that’s how low I was. I didn’t want it (divorce) to define me, but it did change me irrevocably. I’ve never ever been in the position where I’ve had to ask people for help.’

On her drinking, Myleene said: ‘I remember waking up and thinking it’s ok to have a drink at 11am, because I hadn’t had a drink in 5 hours’. 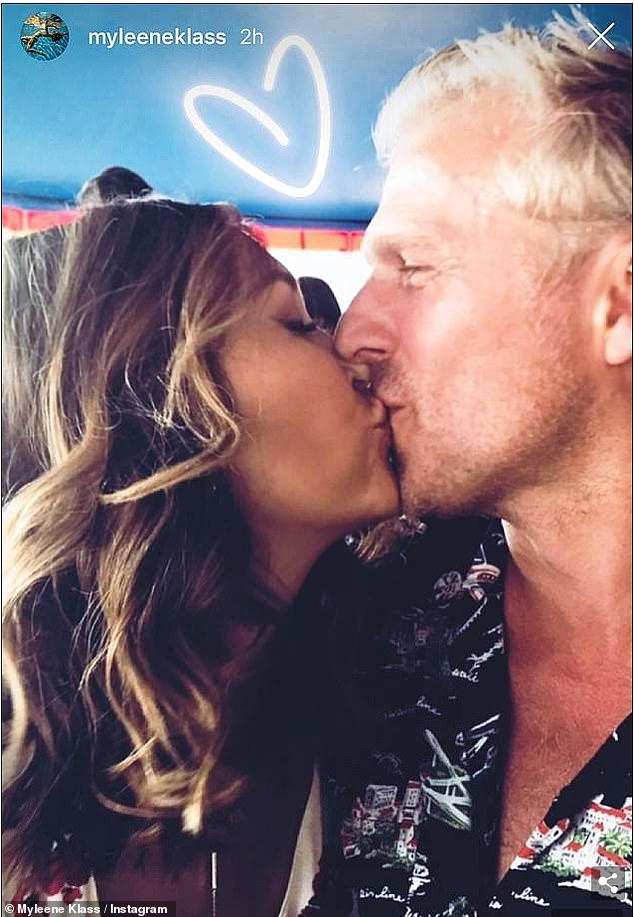 Love at first sight: Myleene has said she fell for Simon ‘instantly’ after they were set up by a mutual friend