Naomi Campbell, Winnie Harlow and Alessandra Ambrosio looked incredible as they took to the runway at the glittering Tommy Hilfiger presentation during London Fashion Week on Sunday.

Supermodel Naomi, 49, covered up her gym-honed frame as she donned a neon and white tracksuit and box fresh trainers as she commanded attention on the TommyNow runway -showing off the Tommy X Lewis Hamilton collection.

The sporty top, which boasted puffed neon sleeves, was paired with a black silk patterned scarf. 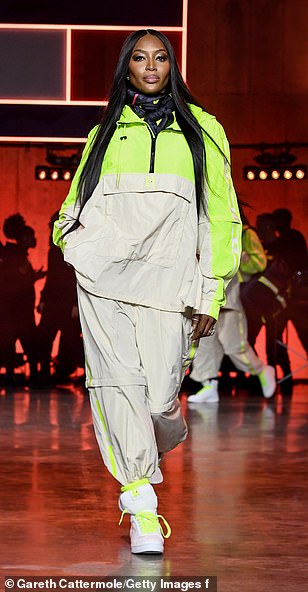 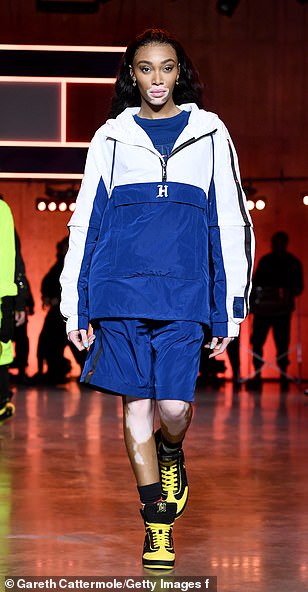 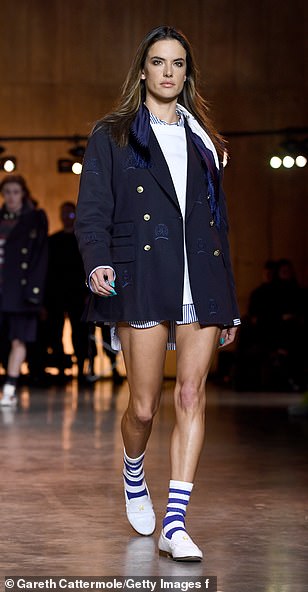 Casual cool: Naomi Campbell, Winnie Harlow and Georgia-May Jagger looked incredible as they took to the runway at the glittering Tommy Hilfiger presentation during London Fashion Week on Sunday

The Vogue coverstar paired this with matching joggers and neon laced high-tops.

Her raven locks were styled sleek and straight while her stunning visage was adorned with metallic shadow, fluttery lashes and berry lipgloss.

Winnie, 25, donned a blue and white sports jacket, worn over a blue shirt and paired with shiny shorts.

Strut: The supermodel, 49, covered up her gym-honed frame as she donned a neon and white tracksuit and box fresh trainers as she commanded attention on the TommyNow runway 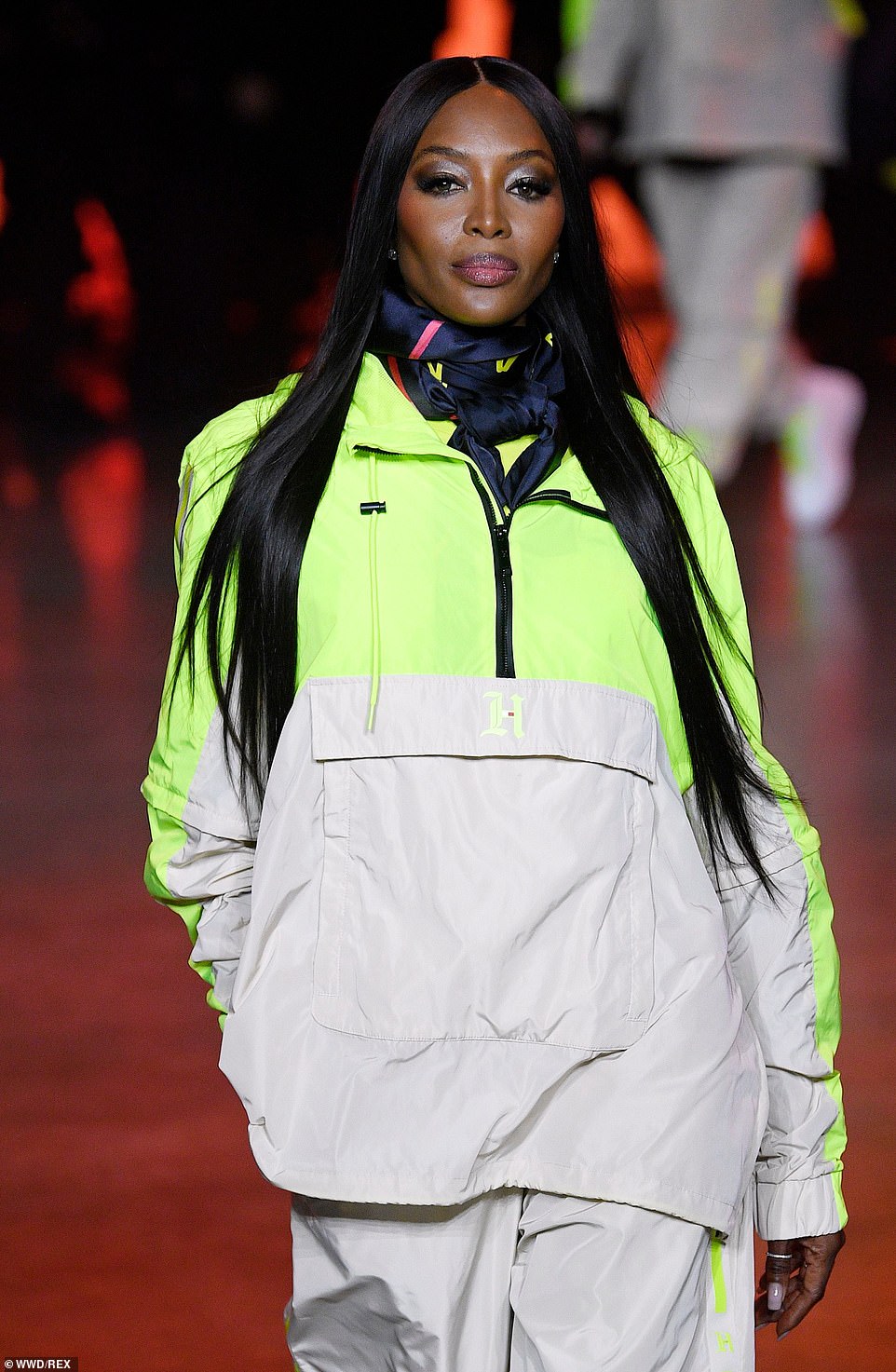 Catwalk queens: The star joined fellow runway veteran Jodie Kidd, 41, on the catwalk, with the blonde beauty wowing in a patterned silk dress for the Tommy Hilfiger show

The America’s Next Top Model star teamed this with black and yellow trainers and wore her raven locks slicked back from her face.

Former Victoria’s Secret Angel Alessandra, 38, displayed her bronzed legs in a nautical-inspired pair of pinstriped shorts paired with a white blouse and a tailored navy blazer.

The star wore a jaunty neckerchief and completed her ensemble with white shoes and striped socks.

Her brunette locks were styled sleek and straight while smoky shadow and lipgloss adorned her visage.

Georgia-May, 28, teased a glimpse of her cleavage in a cream boilersuit emblazoned with the word Unity and neon paint swashes, paired with neon laced trainers. 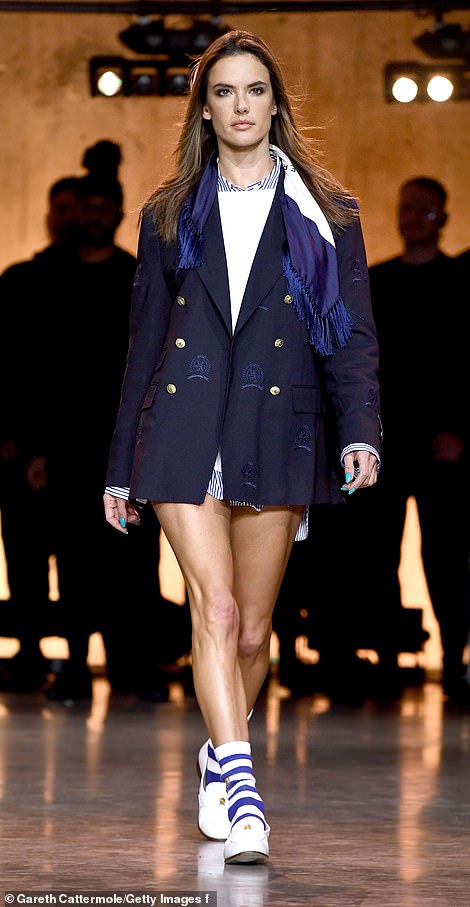 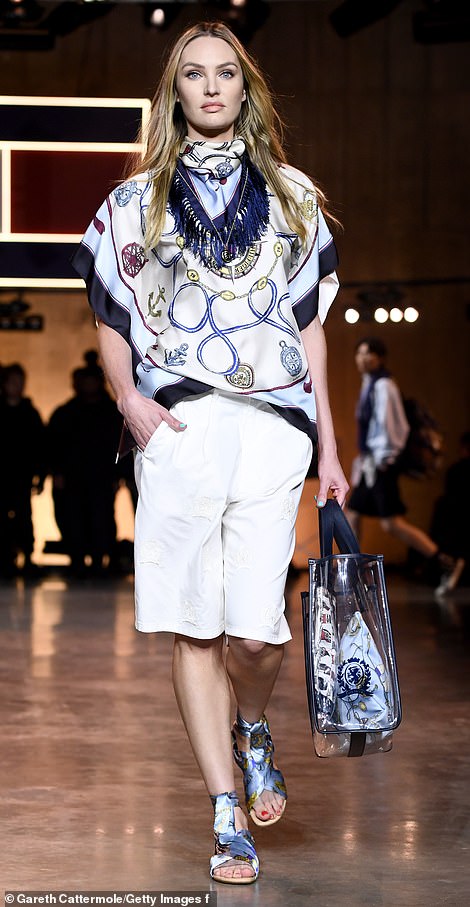 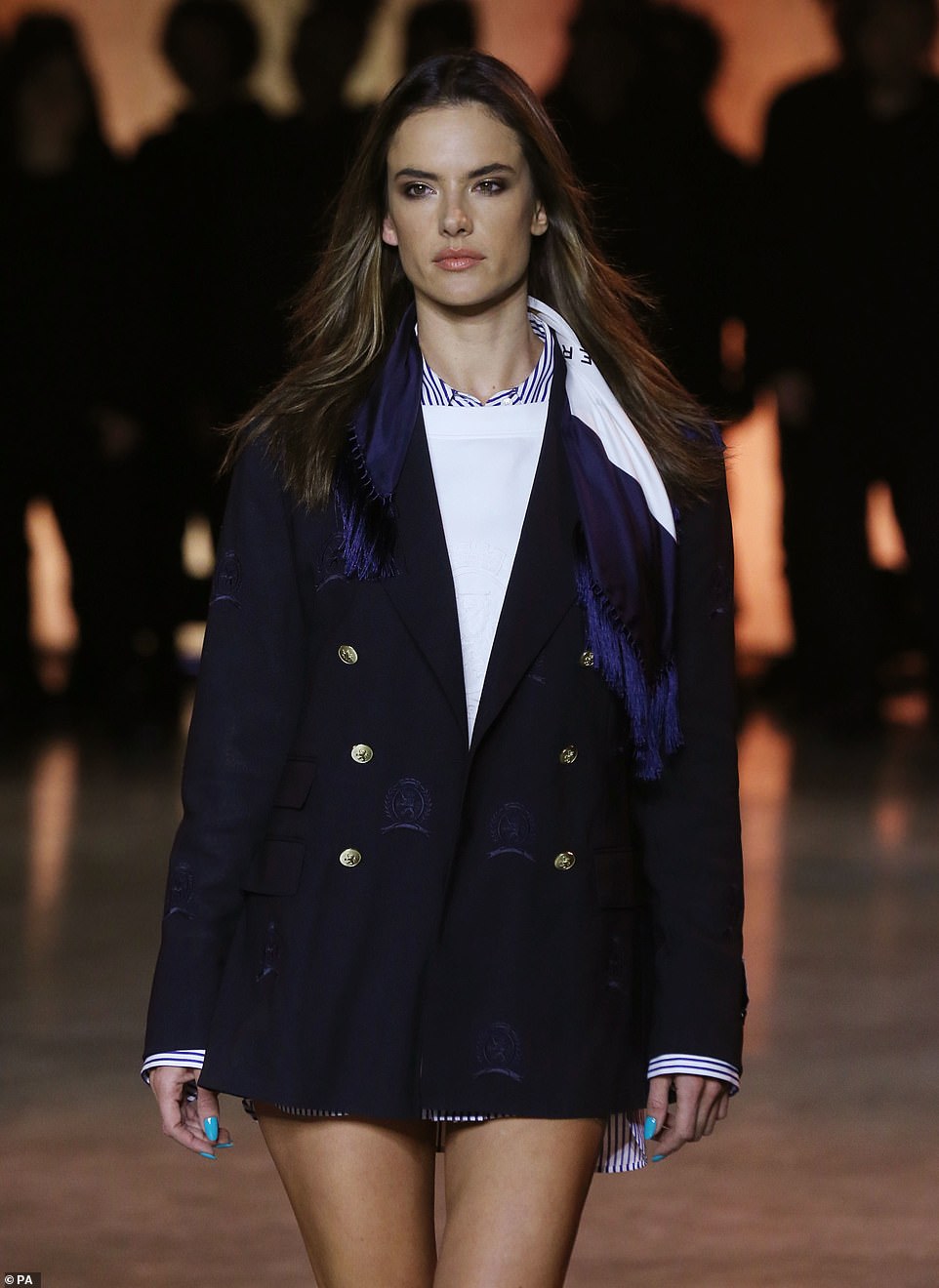 Style star: Alessandra looked stunning as she showed off her runway credentials on the glitzy catwalk

The daughter of Rolling Stones rocker Mick Jagger and model Jerry Hall wore her caramel locks in soft waves while her pretty features were enhanced with a radiant palette of make-up.

The star joined fellow runway veteran Jodie Kidd, 41, on the catwalk, with the blonde beauty wowing in a patterned silk dress for the Tommy Hilfiger show.

The pastel blue and champagne hued silk dress featured gold chain and geometric patterns and was paired with a matching wrap. 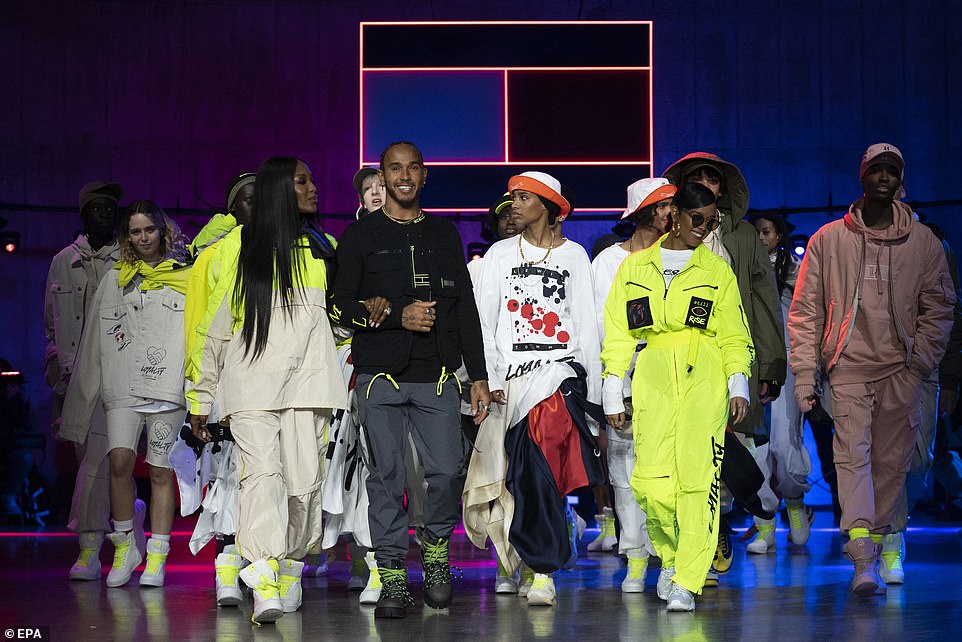 Debut: Lewis Hamilton looked delighted as he walked the runway after his collection’s debut 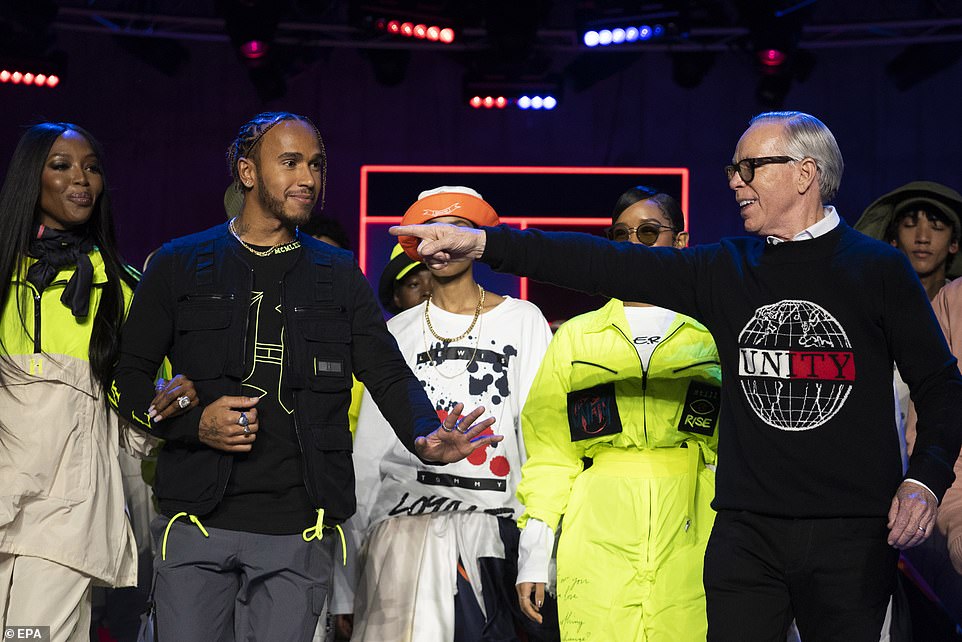 Man of the hour: The star was escorted out by Naomi and Tommy as he walked 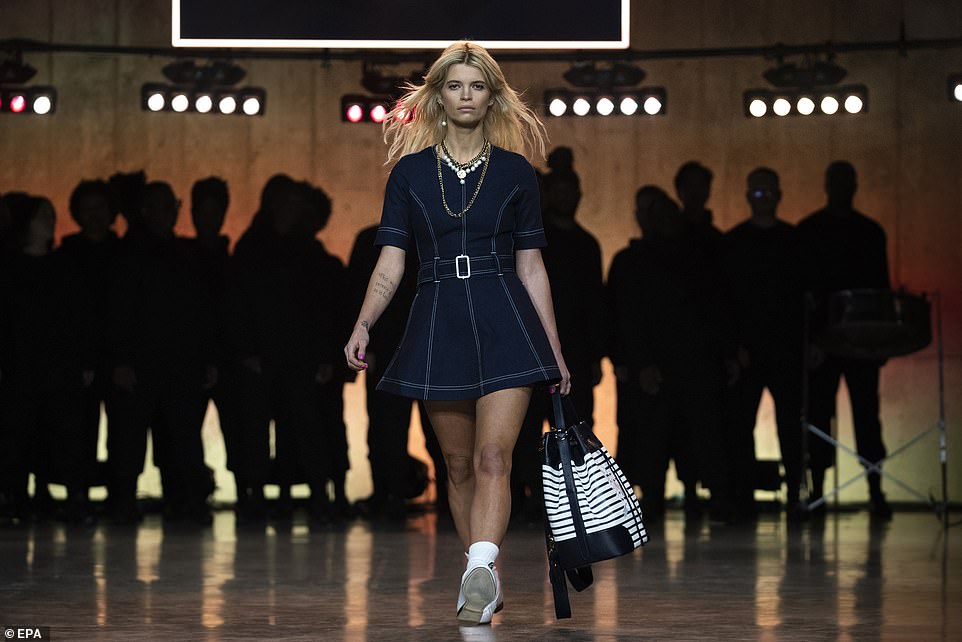 Here she is: Pixie Geldof showed off her lean legs in a denim dress and trainers as she walked the runway

Glamour central: Jourdan Dunn, Erin O’Connor and Halima Aden showed off their sensational style as they walked the runway 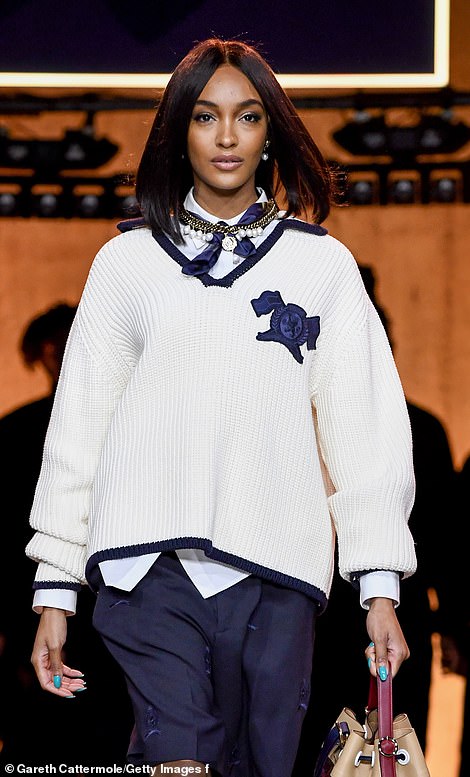 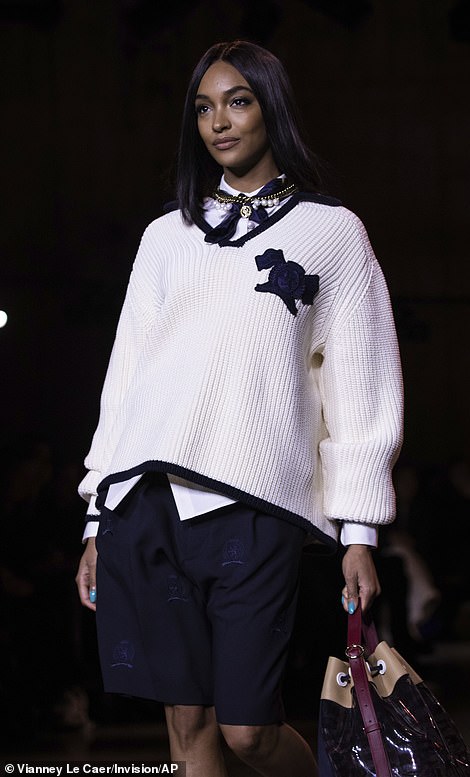 Radiant: Jourdan wore her raven locks in a sleek centre part and rocked bright blue nails as she walked

The star paired this with Roman style sandals and a fringed neckpiece as she strutted.

London Fashion Week showcases 250 designers on a global stage, promoting brand’s garments to a host of influencers and retailers.

This week LFW will take place between 14 February and 18 February and it is estimated that buyers place more than £100million in orders over the season. 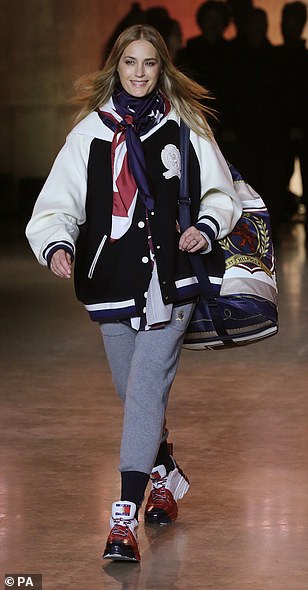 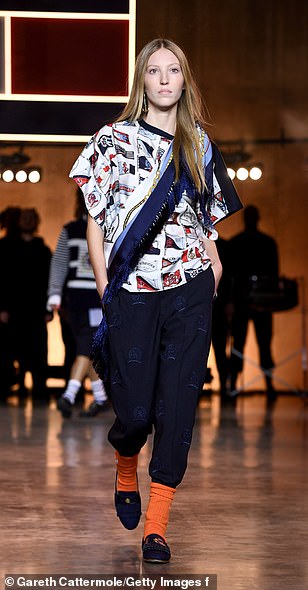 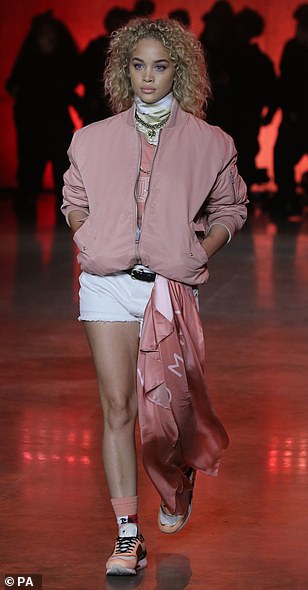 Walk this way: Yasmin Le Bon, Ella Richards  and Jasmine Sanders showed off their modelling prowess as they took to the catwalk 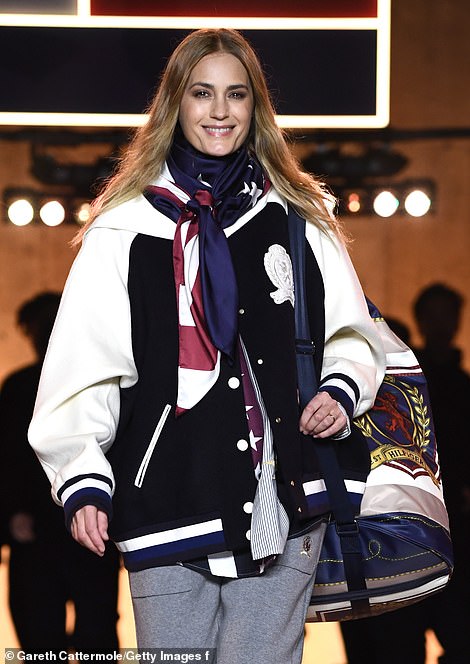 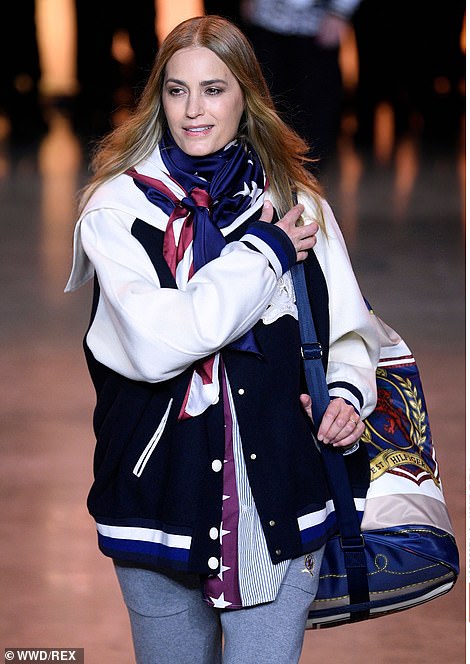 Ageless: Yasmin looked incredible as she showed off her beaming smile while walking for TommyNow

Thousands are set to descend on the bi-annual event, including 2,500 members of the public, to watch presenters from more than 60 brands including Tommy Hilfiger.

Tommy Hilfiger is currently in the midst of a world tour and collaboration with Lewis Hamilton so his finely-tuned show will be sure to impress.

London-based designer Yuhan Wang, who was born in China, had to live up to high expectations as she kicked off the week with her first ever solo show.

It has been confirmed that a ‘senior member of the royal family’ will again present a rising designer with the Queen Elizabeth Award for British Design during the last day of the fashion festival. 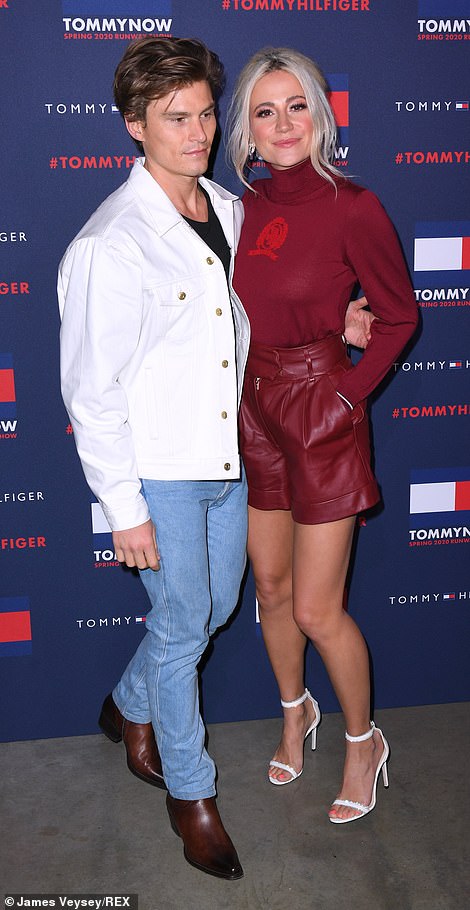 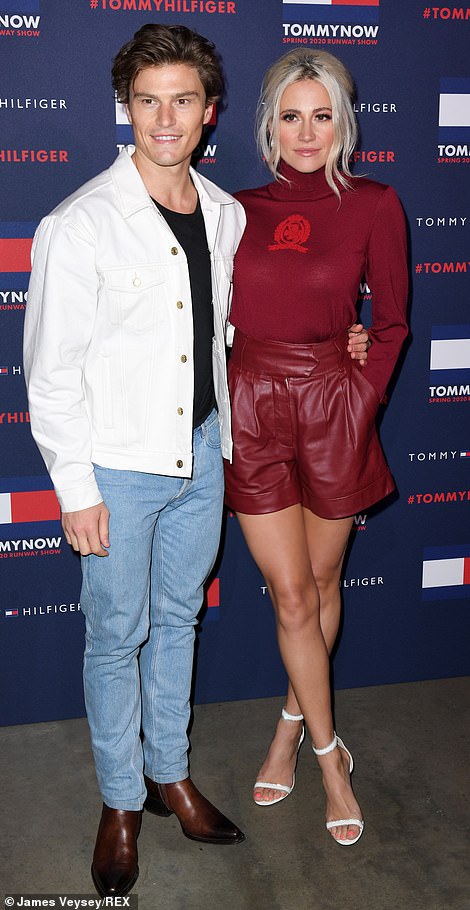 Wow factor: Pixie displayed her toned legs in a tiny pair of red leather shorts worn with a sweater

Stars: Vogue Williams wowed in a busty trouser suit while Meghan Trainor looked chic in a blue and white dress 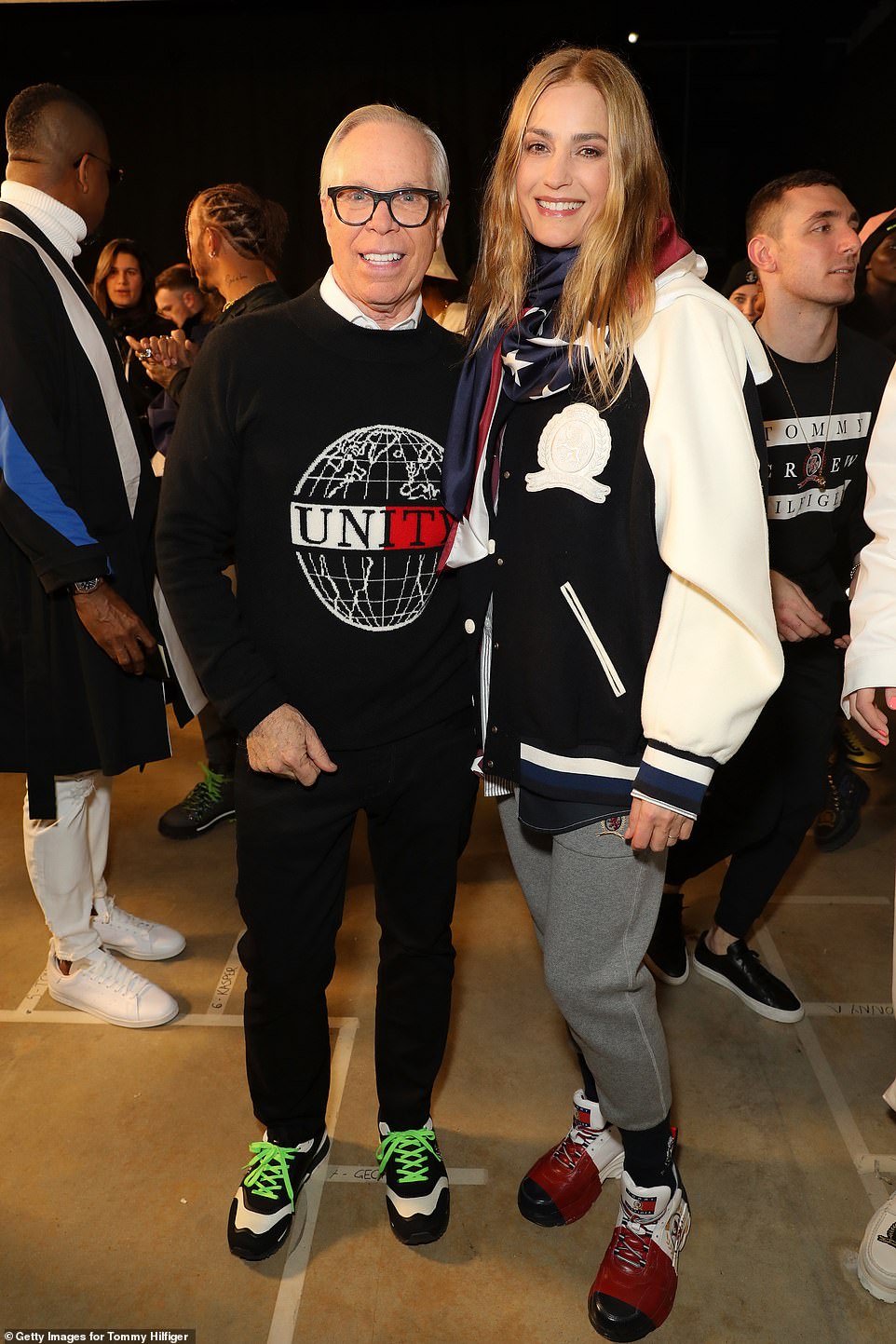 Good to see you: Yasmin looked radiant as she posed with iconic designer Tommy 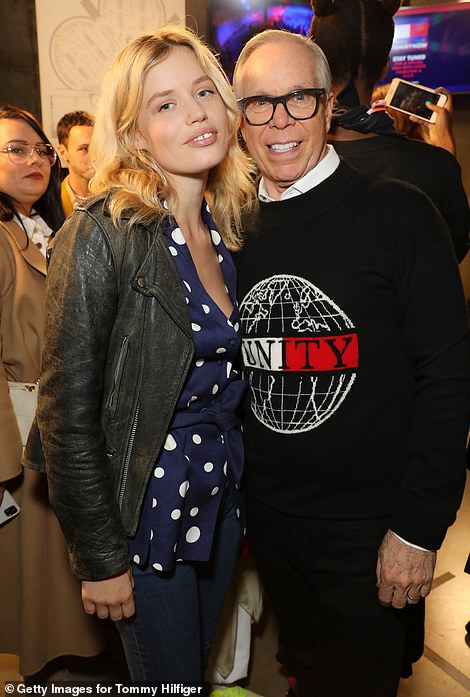 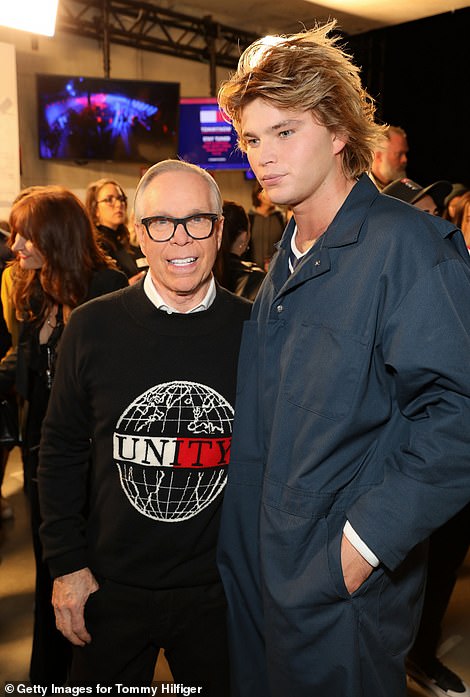 BTS: Georgia May Jagger and Jordan Barrett posed with Tommy Hilfiger backstage at the show 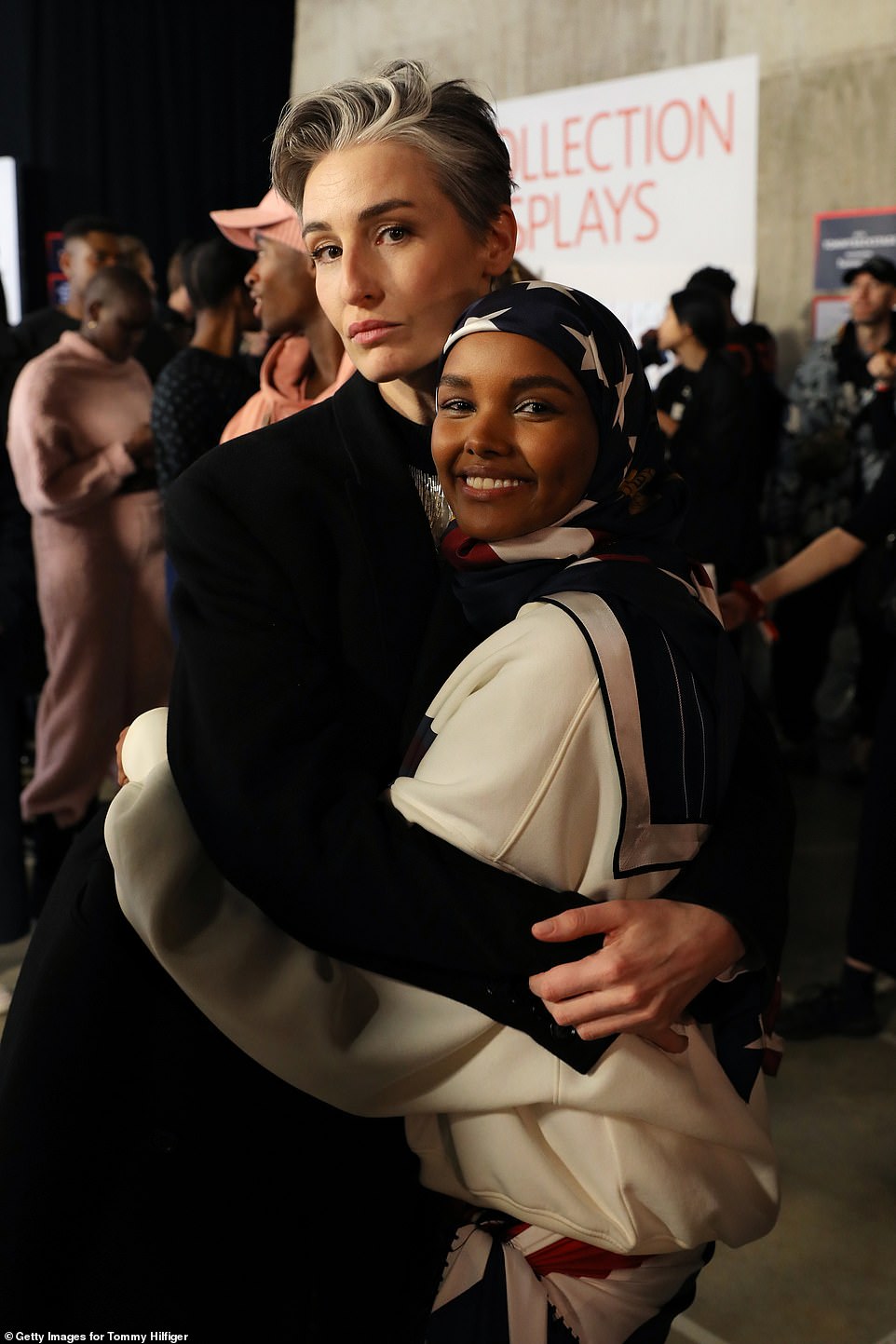 Cute: Erin and Halima looked stylish as they embraced backstage at the show 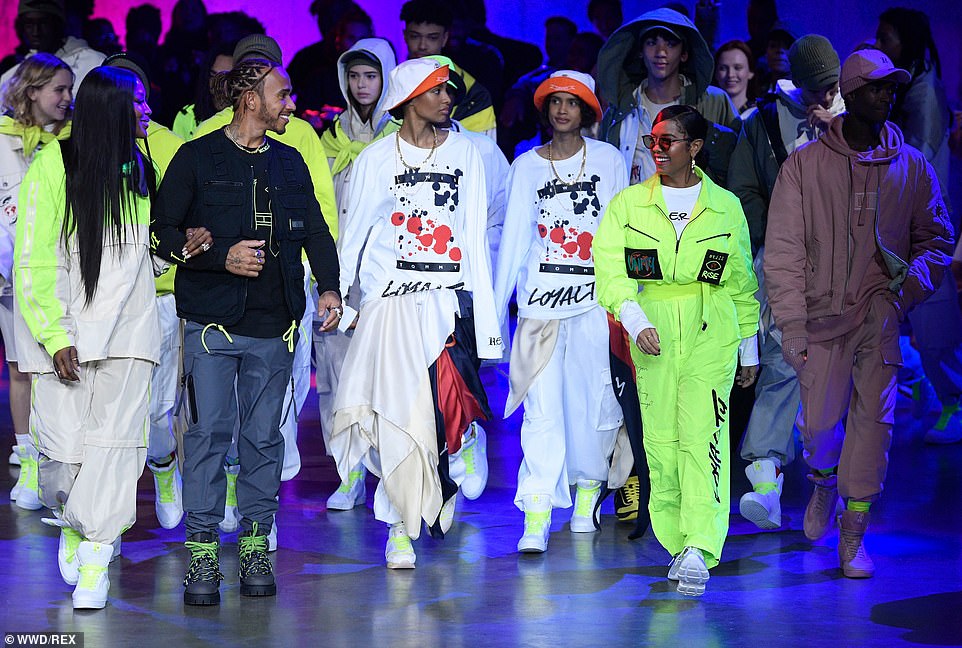 Walk this way: Lewis looked delighted as he walked with the models on the runway

It has been rumoured that this year the Duchess of Cambridge will present the coveted award in keeping with tradition after the Duchess of Cornwall did the honours last year, according to Vogue.

With a growing trend in sustainability, there’s no doubt that the topic will dominate both the runways and headlines in the coming week.

Bethany Williams, who was give Queen Elizabeth II Award last year, has been awarded the Emerging Menswear Designer and said that sustainability is key to her work.

Meanwhile eco-friendly womenswear is expected on the catwalk for British brands including Richard Malone, Mulberry and Vivienne Westwood. 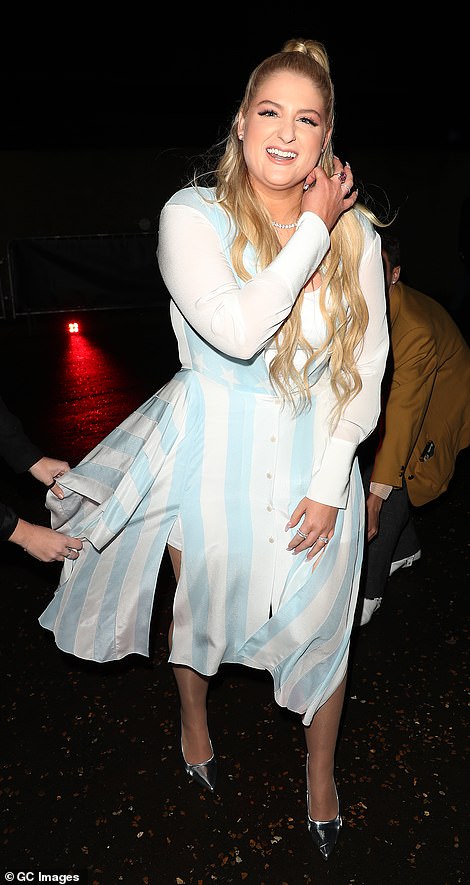 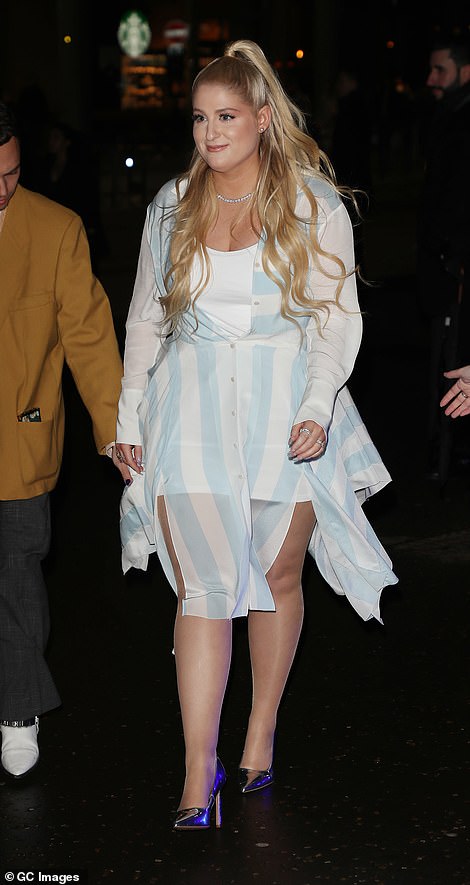 Fun: Meghan looked in great spirits as she left the show later that evening