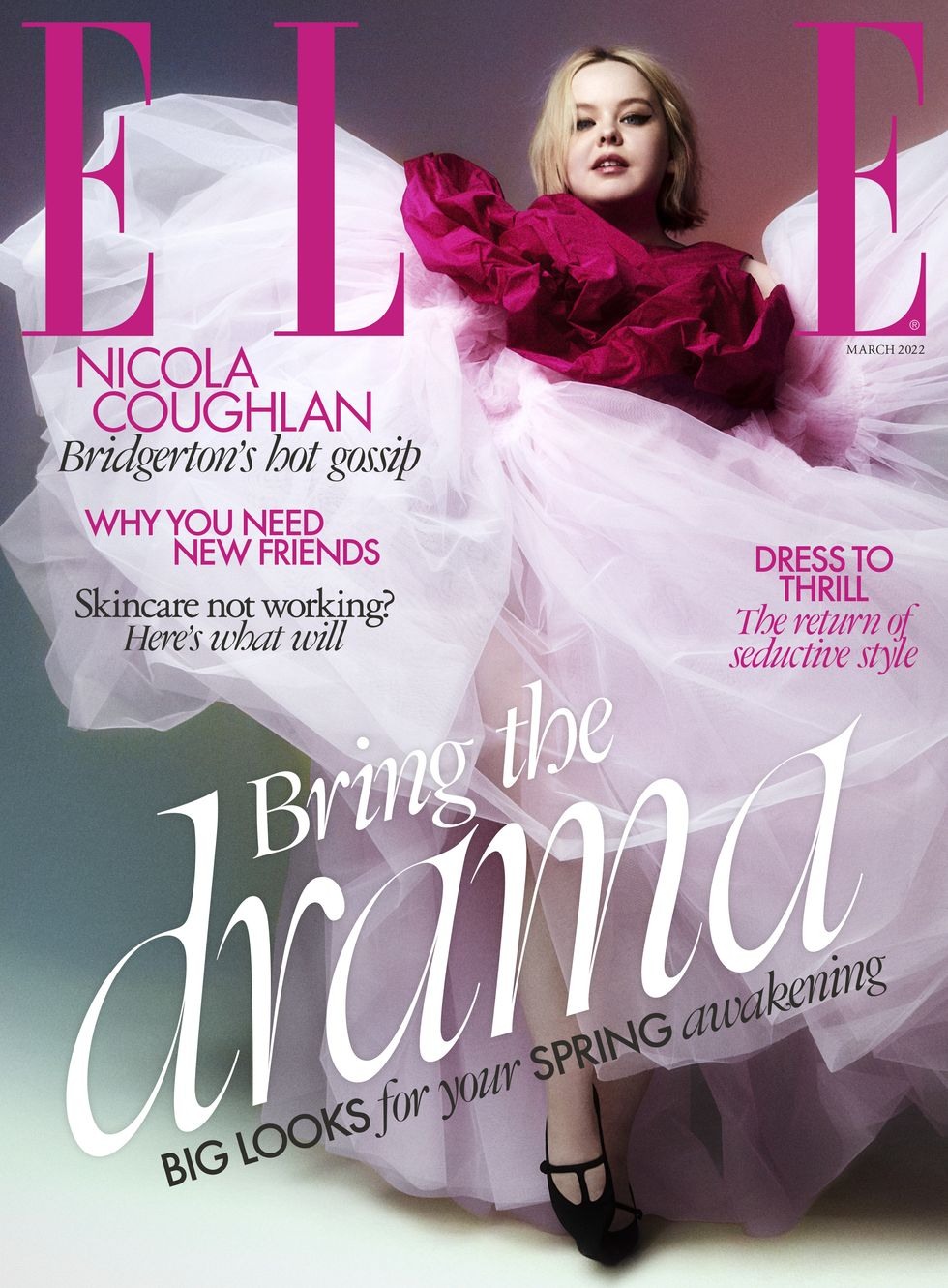 Nicola Coughlin is a wonderful actress, best known for her work in Derry Girls and Bridgerton. At first, I didn’t even put it together that she was the same actress in both! For several years, she was working on both, but as she was chatting to Elle UK, she spoke about shooting her final scenes for Derry Girls. So now she just has Bridgerton, and I would imagine she gets loads of scripts for film and TV. She’s also older than I thought – she’s a baby-faced 35 years old, so she’s “playing younger” across the board. Nicola mostly chatted about Bridgerton and her life since Bridgerton blew up. Nicola is a crucial part of Bridgerton, but she doesn’t spill much tea about the new season. Some highlights:

Whether she knew Bridgerton would blow up: ‘I didn’t think it was going to be the biggest show on Netflix, I didn’t think that level. But I had lunch with Phoebe [Dynevor, who plays Daphne Bridgerton, the focus of much of series one] maybe about two months before it came out. And I said, “I think your life’s going to change.” And she was like, ‘No, I don’t know. I’ve done things before that people thought was going to be huge and it hasn’t worked out.” But I just had that instinct about it.’

On fame: ‘Being famous is like being a dog on the Tube. It’s exactly the same energy. When you get on, everyone looks at you. Some people are so smiley, while some are afraid of you and don’t want to go near. Some people touch you without asking. I can still do the things I want to do, obviously, but it is different.

Her advice to young actors: ‘Whenever people say they want to get into this industry, I’m like, you’ve got to want it so badly. Because if you don’t, you’d be mad to do it, absolutely mad. I barely saw my family last year because of filming. There’s a lot of sacrifices to be made. In my twenties, I never went on holiday. I was so broke. So I never want to sell people this ideal that it’s all wonderful and fun. It’s hard work. But it’s amazing. I wouldn’t do anything else.’

Her allergy to ‘difficult people’: ‘I just want to work with people who are considerate and open and just love what they do and want to make great things. I have an allergy to difficult people. I’ve literally had stress rash from them. But I think a lot of it comes from real toxic masculinity. I met a young actor recently who had been filming a show, and he said that [when the director called “action”] the main actor actually threw a chair across the room into a bunch of extras. He was like, “It was amazing, because it’s what he needed to get into the scene.” And I was like, “It’s a pile of sh*t.”’

She’s more than ready for things to change: ‘I think television – not just television, the world – has been so male-centric for so long. And, like with anything, we just want something refreshing and new – let’s just try that. But I get so much of, “Oh, my wife likes that.”’

I think Bridgerton was so successful because it was about pretty people in great costumes getting into romantic and sexual dramas. Like, Jane Austen with actual sex scenes. Bridgerton showed that there’s a huge audience for that kind of content. In this interview, Nicole also gives a little preview of a storyline for her character – I’m not going to ruin it for the people who haven’t read the books, but her character definitely will have some sexy scenes. Yay! Oh, and she’s also Instagram-friends with Kim Kardashian. Mostly, Nicola seems like a “fan” and a very normal person where she gets to hang out with famous people.