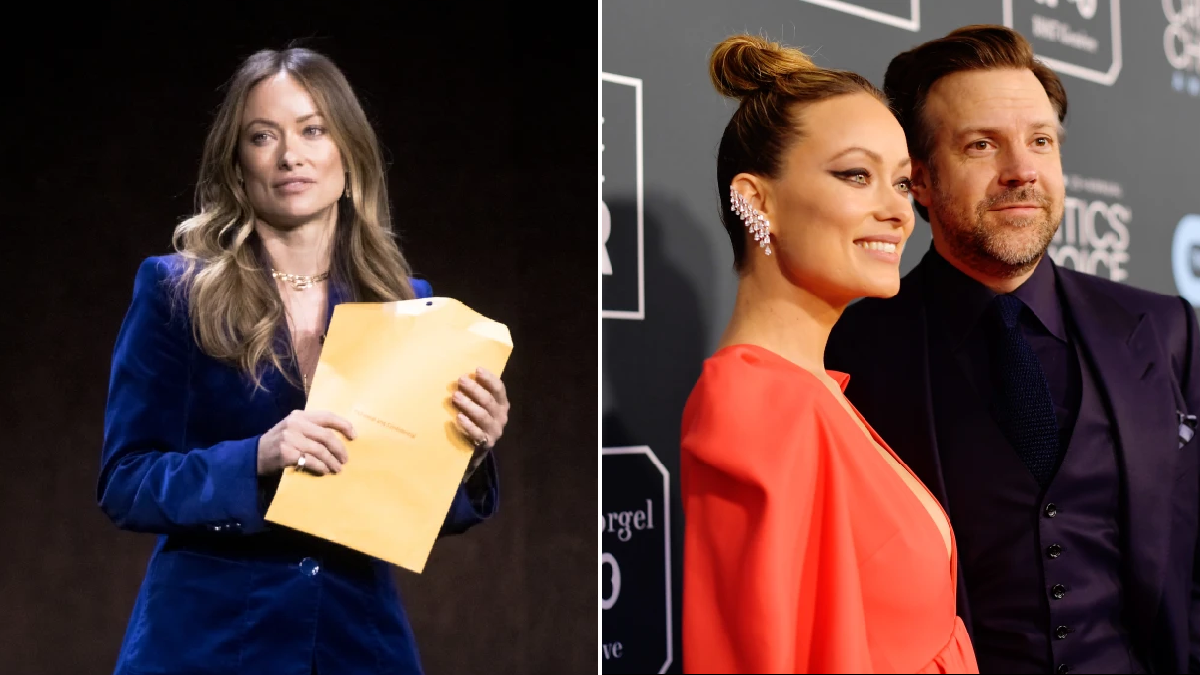 Fans were left divided when Olivia Wilde was served legal documents by ex-partner Jason Sudeikis while on stage and in the middle of a presentation.

The 38-year-old was reportedly at CinemaCon 2022 in LA, for a presentation on upcoming film Don’t Worry Darling when she received custody papers from the Ted Lasso actor, 46, regarding their two children.

According to reports, she was briefly interrupted when someone in the front row slid a brown envelope toward her on stage, and asked: ‘This is for me?’

In pictures from the event, the mom-of-two could be seen standing on stage in a blue suit, clutching the paperwork.

While it is claimed that her former partner was unaware the documents would be served in such a public manner, it isn’t an unusual occurrence for a process server to do so.

David Glass, a family law attorney, explained the job of a process server – the person in charge of handing over legal documents to those in question – and revealed that it cannot be done ‘in a private location’.

‘They can’t climb over the wall to get into your house. If you live behind gates, they can’t come into a private club to serve you. But anywhere public, if they can get close to you, they just have to get close to you [and] hand you the envelope, or in this case, sliding across the floor [and] say, “This is for you”. And as soon as the person says, “I got it” and picks it up, that effectuates service,’ he said.

They have to do ‘everything they can’ to hand the paperwork to the person in question, before going to another party in the same house.

Serving someone while on stage at a presentation might be surprising to us – and the person being served – but it’s not unheard of.

‘Process servers have been known to hide in bushes and behind garbage cans and jump out and surprise people,’ David continued to People Magazine, recalling one case where someone was approached with papers while on stage at a seminar.

‘It’s not unheard of, but it’s not a frequent occurrence.’

Olivia and Jason started dating in 2011 and announced their engagement two years later – before welcoming children Otis and Daisy together.

They called time on their relationship in 2020 and the OC actress has since moved on with Harry Styles, while Jason has been linked to Keeley Hazell.

He was reportedly unaware of how publicly his ex was served the custody papers, with his reps issuing a statement on the incident.

It read: ‘Mr Sudeikis had no prior knowledge of the time or place that the envelope would have been delivered as this would solely be up to the process service company involved and he would never condone her being served in such an inappropriate manner.’