The 29-year-old princess stunned in a spring-themed floral frock as she and the 92-year-old monarch attended the Royal Maundy Service on Thursday, April 18. The duo were all smiles as they held bouquets and walked the chapel’s holy halls. They also gifted each recipient of Maundy money — one male and one female for every year of Elizabeth’s life — two small bags, one red and one white, containing coinage to symbolize the special day.

The red bag contains £5 and a 50p coin to symbolize the queen’s gifts of food and clothing. The white bag contains money adding up to the value of the monarch’s age. Elizabeth will celebrate her 93rd birthday on Sunday, April 21, so recipients were gifted that amount in Maundy coins.

According to the Royal Mint’s website Opens a New Window. , Britain’s beloved royal family has participated in the traditional service for hundreds of years: “It seems to have been the custom as early as the thirteenth century for members of the royal family to take part in Maundy ceremonies, to distribute money and gifts, and to recall Christ’s simple act of humility by washing the feet of the poor.”

Although Eugenie attended the event sans Brooksbank, 32, the Casamigos brand ambassador previously joined his wife and her father, Prince Andrew, at the Stanmore Building’s official new opening at the Royal National Orthopaedic Hospital in March.

Andrew, 59, has been a patron of the hospital since 2003 and Eugenie had surgery there 12 years ago to fix her scoliosis. She proudly showed off her scar in her open-back wedding dress.

Scroll down to see photos of Elizabeth and Eugenie giving back before Easter! 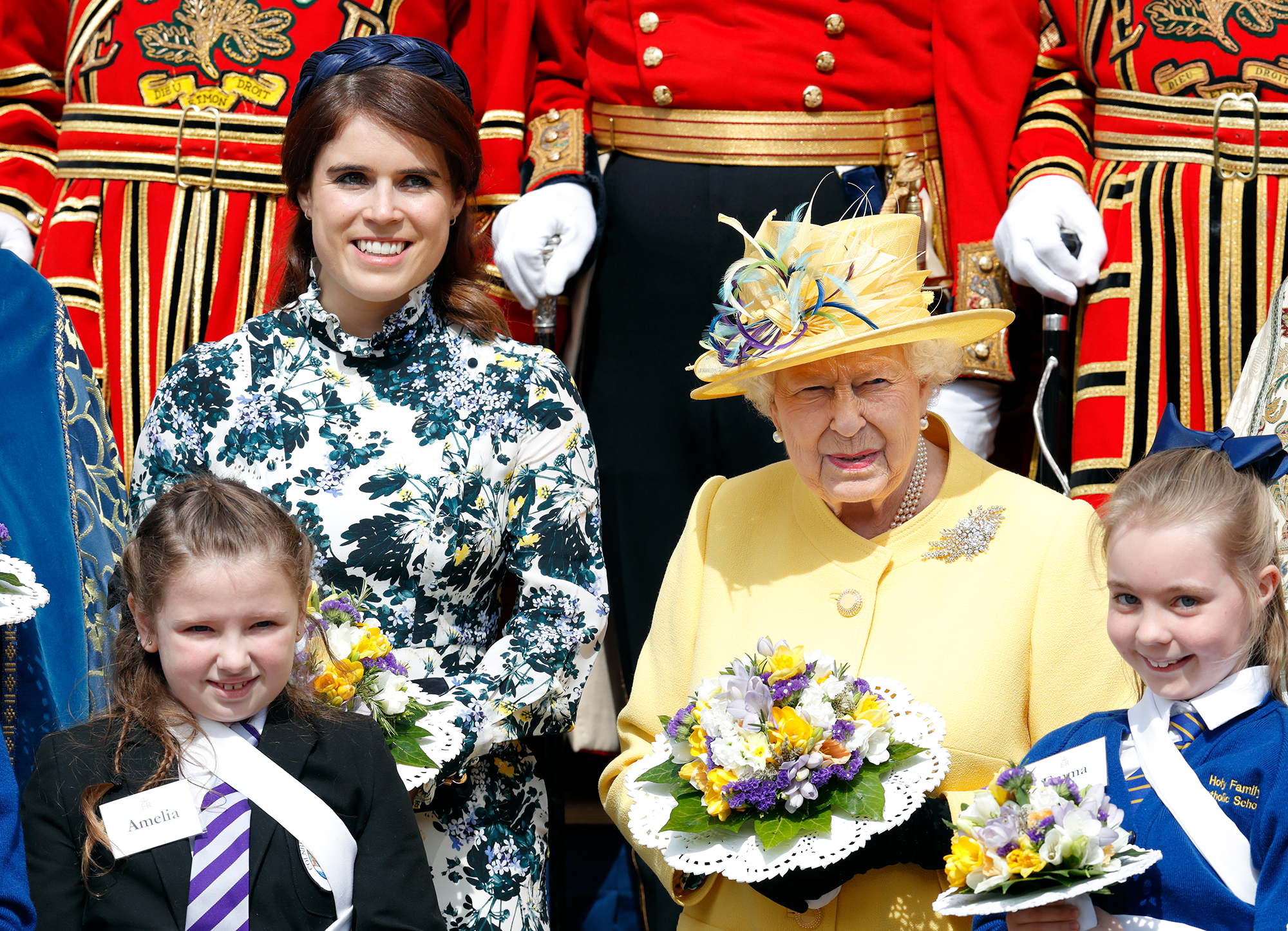 Duchess Sarah Ferguson, otherwise known as Fergie, praised her daughter’s philanthropic efforts in a heartfelt Instagram post. “So proud of Her Majesty and Eugenie at the Maundy Thursday Service at St. George’s Chapel today,” Fergie captioned the sweet photo. 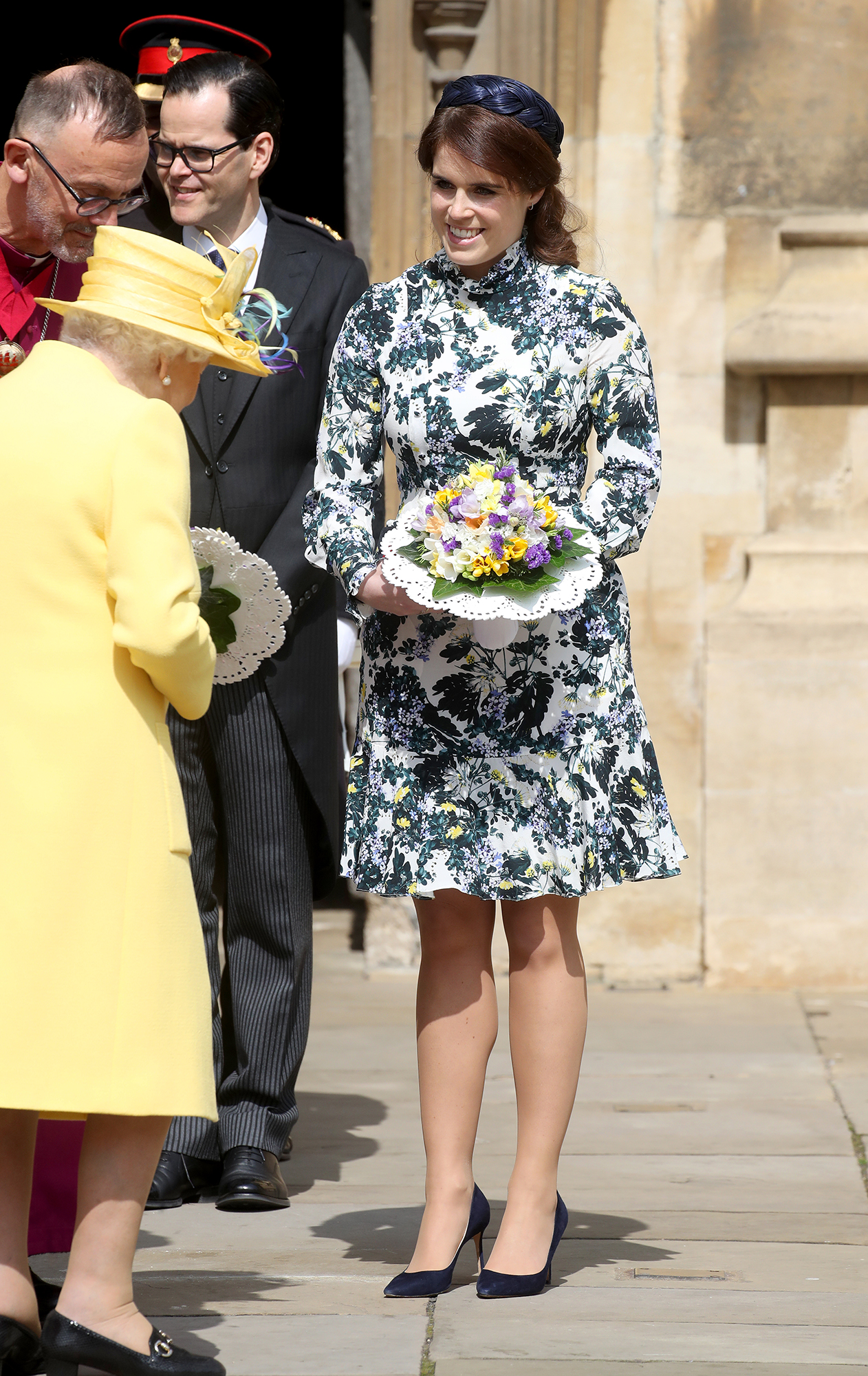 Eugenie was all smiles while accompanying her grandmother for the annual outing. 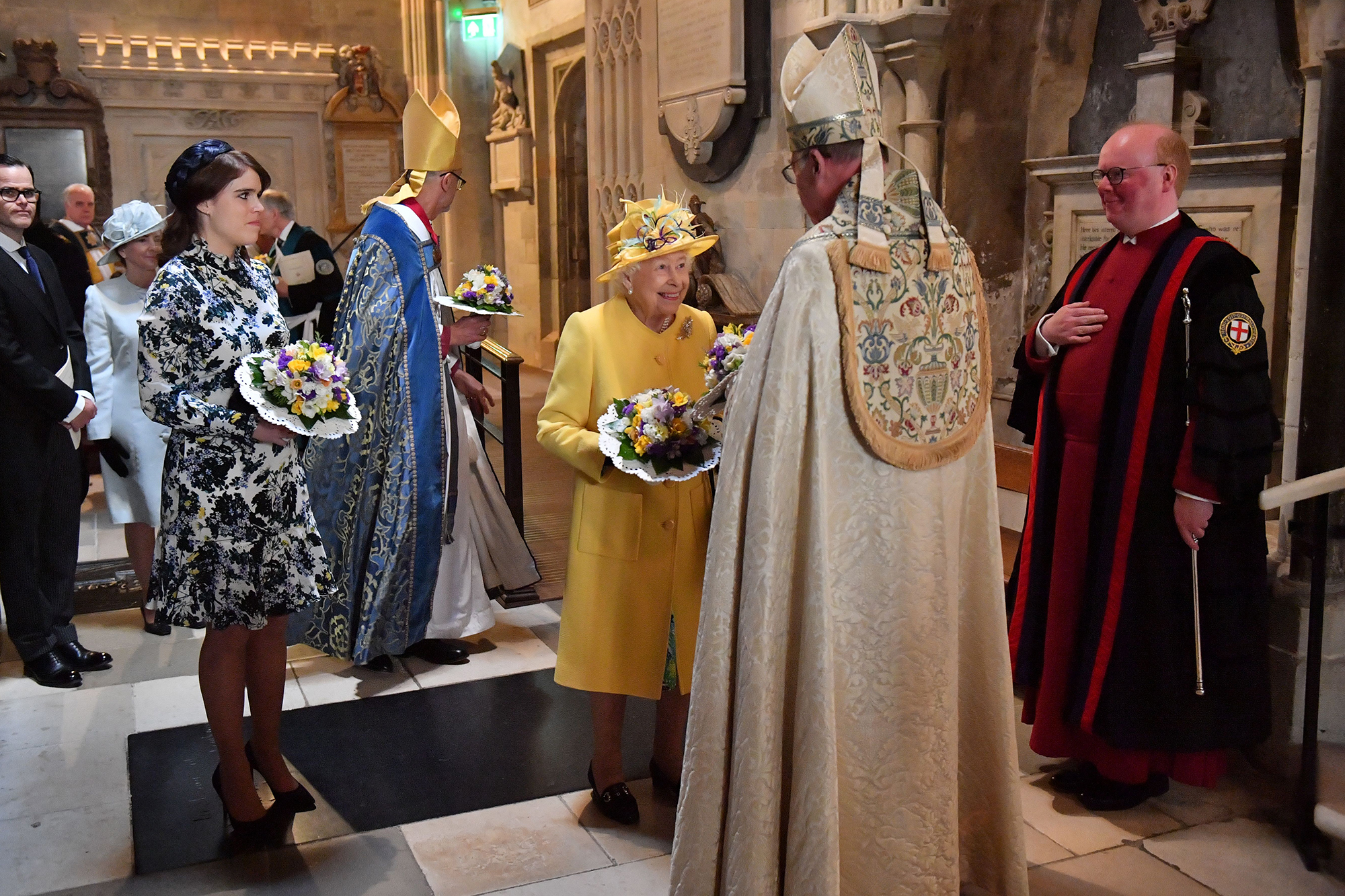 Many royals have tied the knot at St George’s Chapel. Before Eugenie and Brooksbank exchanged vows in October 2018, Prince Harry married Duchess Meghan in May of that year. 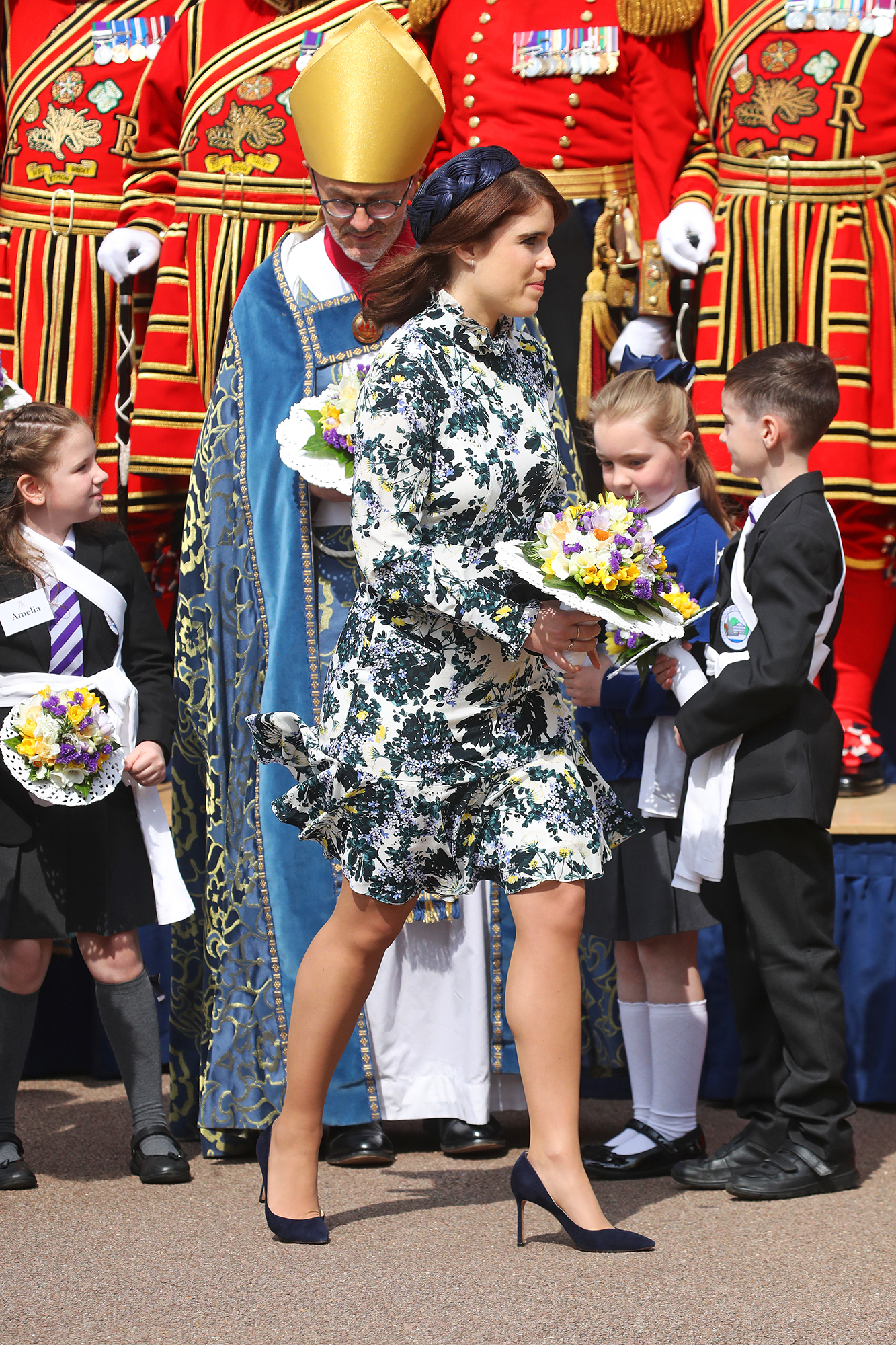 Eugenie’s appearance with Elizabeth marks the second time a royal family member other than Prince Philip has joined her for the service. In 2012, the longest-ruling British monarch invited Eugenie’s older sister, Princess Beatrice, to accompany her and Philip to the event. 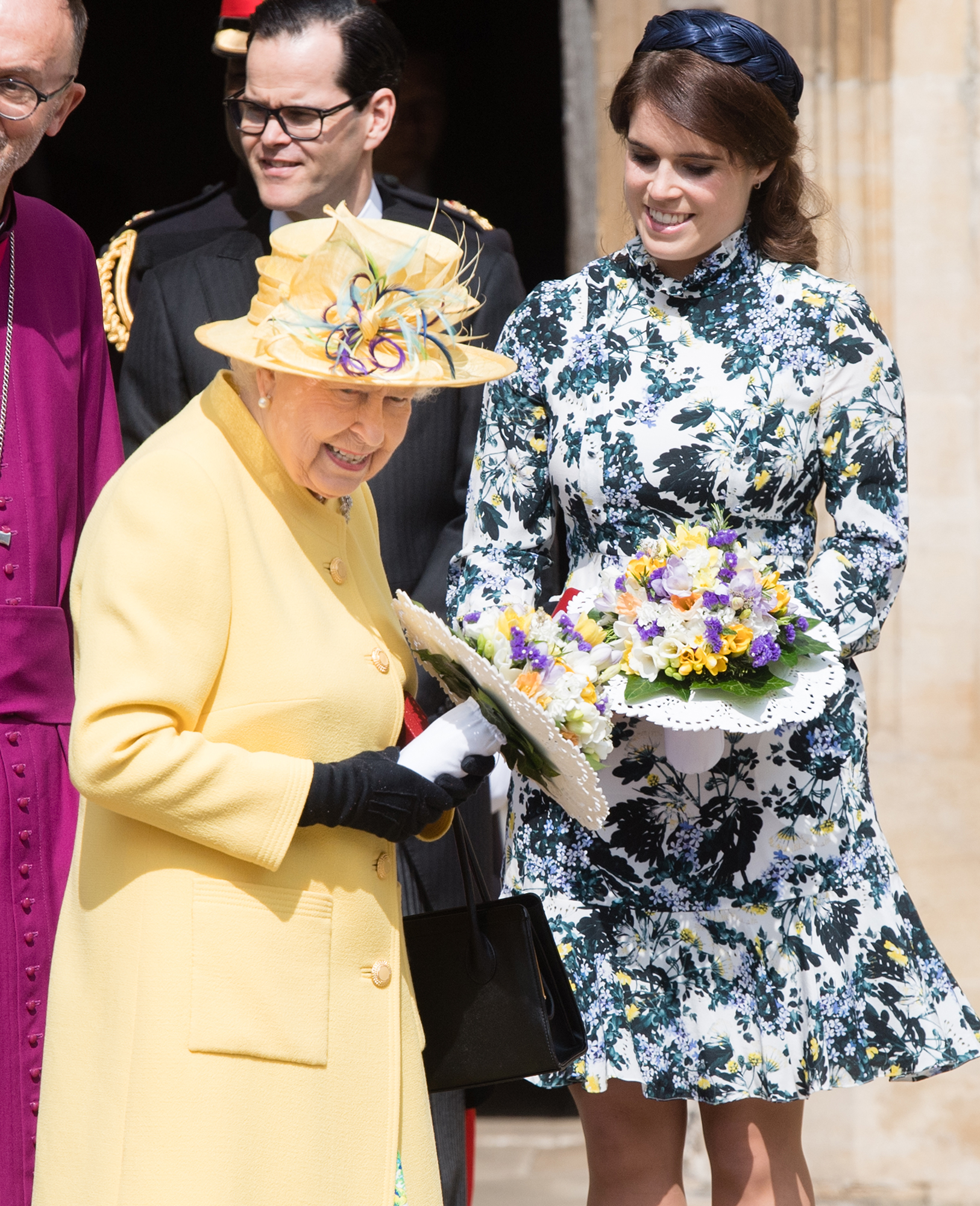 The important event always takes place on the Thursday before Easter.