Regina King hosted a memorable episode of Saturday Night Live, which included a plethora of sketches, including a Gorilla Glue segment. But one of the most exciting moments of the night was when King closed the episode wearing a blkflmmkr hoodie.

By wearing the sweatshirt, the actress promoted the Black-owned brand, which highlights the work of people of color in the entertainment industry.

As the blkflmmkr website reveals, the brand was “designed to celebrate people of color on all sides of the camera.” 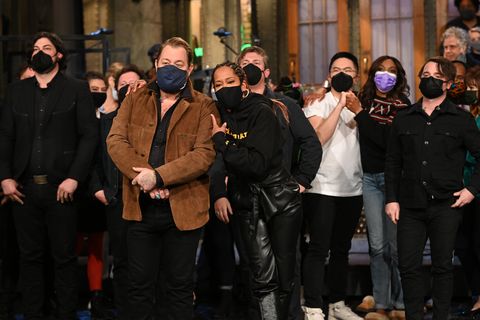 The founder of blkflmmkr, Jazmin Jenay, opened up on her website about her decision to create the brand. Jenay, “an actress, screenwriter, and 4th-year Business Administration student,” calls blkflmmkr her “baby,” and revealed that she came up with the idea to promote the work of Black filmmakers, writers, and artists, with a view to one day advocating on behalf of “marginalized voices through film.”

King regularly uplifts the work of Black writers, directors, and actors. While promoting Watchmen, King opened up during Variety’s Actors on Actors series. She told Reese Witherspoon, “One of the things about Watchmen that blew me open when I read the pilot was all of these historical things that actually happened that are within the story … Then the pilot airs, and how many people had never heard of Bass Reeves? And when I see so many people not knowing, of all races, of all ages. … But we have this revisionist history in our country that some people just refuse to acknowledge is revisionist history.”